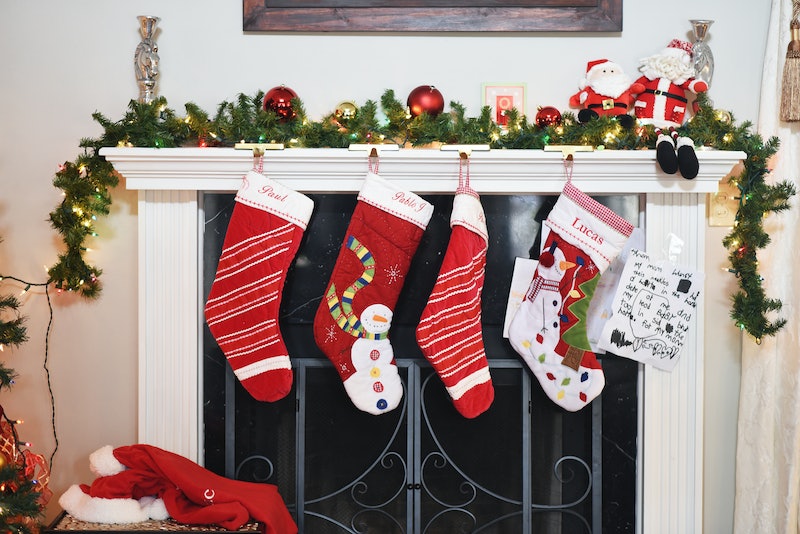 As a child, I loved hanging my Christmas stocking almost as much as I enjoyed decorating the tree or baking cookies for Santa. The question of why we hang stockings at Christmas never even crossed my mind, though, because to me, the fancy sock merely signified extra presents. As it turns out, this handy piece of hosiery has adorned fireplaces around the world for generations as both a jolly decorative element and useful gift receptacle — but pinning down the exact origins of the tradition is surprisingly difficult. For something so intrinsic to the popular winter holiday, the reason as to why we put out socks to be filled with gifts is shrouded in myth and folklore.

While there is no known written record of the Christmas stocking's origins, in many folk tales, the stocking is linked to the idea of Saint Nicholas (or Santa Claus, as he is colloquially known) as a gift giver. The poem "A Visit From St. Nicholas," published nearly 200 years ago in 1823, clearly describes the importance of stockings: "The stockings were hung by the chimney with care,/In hopes that St. Nicholas soon would be there."

It is believed, however, that gifts were placed in stockings and footwear as far back as the 1100s. "Nuns spread the notion of a magical night visitor, who comes and leaves gifts for children," explained Gerry Bowler, a professor of history at the University of Manitoba, in a video created for the university's YouTube channel in 2010. "Kids were encouraged to leave out their shoes and have little gifts put in. So the shoe precedes the stocking." The footwear would be filled with treats if the child was good, but if the child was deemed naughty, they might find coal, sticks, or even manure. (Not a very merry Christmas.)

The tradition of leaving out a shoe to be filled with gifts is thought to predate Christianity; it's possible its roots lie in Norse mythology. In parts of Northern Europe and Scandinavia, it is believed that during the Winter Solstice, children would place a boot or clog filled with carrots, sugar, and straw at the hearth for the Norse God Odin's flying horse, Sleipnir. The shoe would be filled with gifts and candy as a reward for their kindness. This tradition was then adapted for St. Nicholas Day, where the shoes would be left out in the days leading up to Dec. 6, sometimes filled with carrots for Sinterklaas and his horse.

The progression from shoe to stocking is not quite as clear — and in fact, the most popular myth explaining the origin of the Christmas stocking tradition has nothing to do with shoes or flying horses at all. The tale goes like this: Once there was a poor widower with three daughters. The widower was fearful that without a dowry, his daughters would be unable to marry, possibly ending up penniless. St. Nicholas, a former monk, was roaming the village when he learned of the family's unfortunate situation. He knew the widower to be too proud to accept charity, so St. Nick dropped gold coins down the chimney which happened to land in the daughters' stockings, which had been drying by the fire.

In some versions of the tale, St. Nicholas slides down the chimney and fills the stocking with gold, while in others legends, Bishop Nicholas is caught thowing bags of gold into the stockings. Some versions state that the monk left three gold balls in each stocking, which is one of the reasons oranges, tangerines, and other citrus fruit are traditionally used as stocking stuffers. In all versions of the tale, the girls are able to marry and take care of their father with the surplus of gold, living happily ever after. If you've ever wondered why stockings are filled at night, it is believed that St. Nicholas preferred to help those in need secretly so they might give thanks to God, hence stockings are filled while children sleep.

Perhaps this year we can go back to leaving gold in people's stockings?