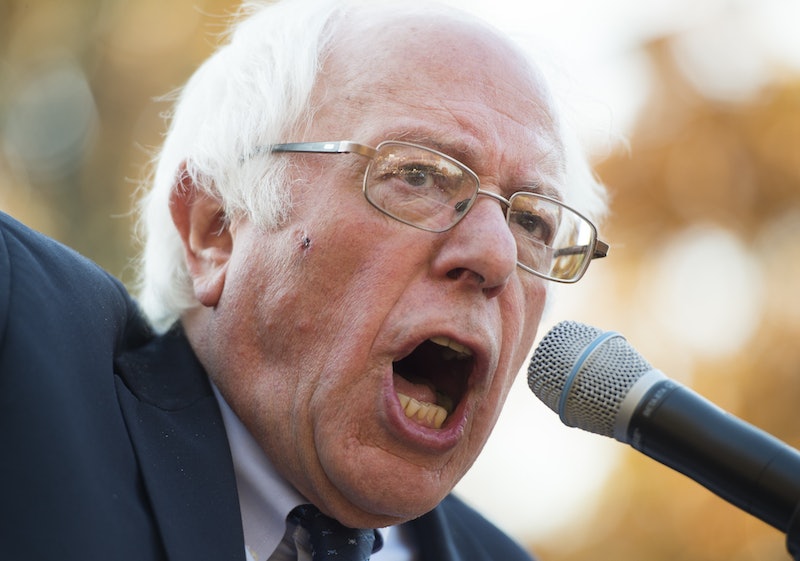 On the potentially fateful day of Dec. 19, several faithless electors are planning to vote for a Republican other than President-elect Donald Trump. Faithless electors are intent on withholding the 270 electoral votes Trump needs to ascend to the presidency, and one particular faithless elector, Christopher Suprun of Texas, even wrote an op-ed in The New York Times about his intention to vote for another Republican instead of Trump. But what if Democrats were doing the faithlessness to their party and not Republicans, in a role reversal so tantalizing it would inspire Tina Belcher from Bob's Burgers to write an erotic friend fiction about it?

Imagine if faithless electors were pushing for a different Democratic candidate in the wake of a searing Hillary Clinton presidential win — and that candidate was Bernie Sanders, as people try to bring him back into the fold and potentially the White House. Tina's last chapter would languidly describe what he places on his desk in the Oval Office, and then they all touched butts, as Tina would end this kind of spicy story.

But seriously, it's unclear whether many would accept a scenario where the faithless elector was a Democrat not voting for a potential President Clinton. It's doubtful voters would be passing around a petition like the one started by Change.org. Picture the "Electoral College: Make Hillary Clinton President" petition instead titled "Electoral College: Make Bernie Sanders President." Would people be encouraging a campaign of changing the minds of electors to switch over to a Sanders vote before Clinton's inauguration?

Sanders himself would never accept putting energy into such a far-flung escapade, no matter how far your sweet, sweet Bern fantasies take you. Sanders has said he's prepared to work with Trump, and if we extrapolate his rock solid character to a Clinton presidency scenario, we could see Sanders saying similar things about faithless electors potentially stopping her electoral vote count.

And trying to stop the elected president from receiving their electoral votes is a messy business, even if experts have said Trump is completely unprepared for the presidency. Back in 2000, in what would be the closest presidential race in history, George W. Bush's team even made a defensive plan in case they won the popular vote and lost the electoral college complete with the slogan, "Democrats for Democracy." The plan was to persuade Democrats to vote Republican, and to persuade Republicans to prepare for a close race. In the end, Al Gore won the popular vote, and George W. Bush won the electoral vote.

Of course, there are special circumstances that make Trump particularly unfit for the presidency. But it's still worth considering whether the reaction would be the same. So before you nod off tonight thinking about Sanders on a unicorn or glimpsing Clinton in the woods, remember: If a Democrat president-elect was real life, you might not want the faithless electors to do your bidding.