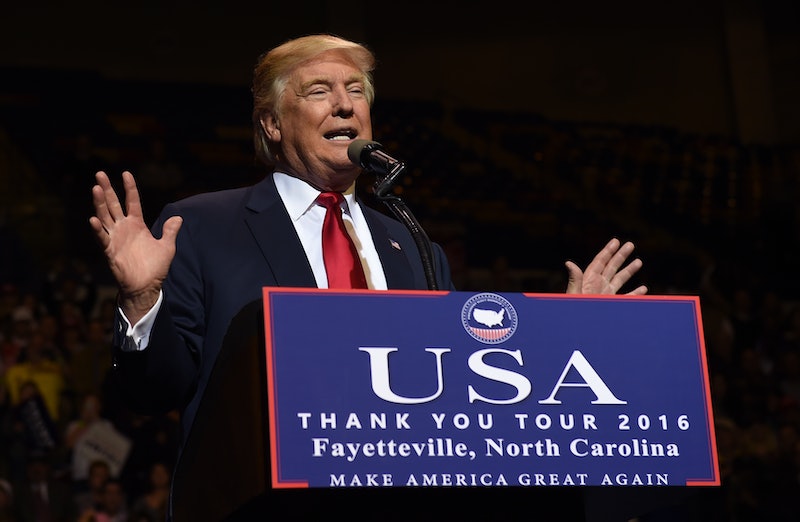 Two days after releasing a short list for Person of the Year, TIME magazine is ready to tell you who it's recognizing this year. Since last year, the world has changed immensely. At the end of 2015, TIME recognized Germany's Angela Merkel for her commitment to protecting the European Project — and particularly for her decision to let in nearly one million Syrian refugees at the height of the migrant crisis. The year 2016 came with its own new concerns, achievements, crises, defining moments and influential individuals. This year, the TIME Person of the Year is Donald Trump.

He was chosen — as you may expect — for his stunning win in November's presidential election, and for essentially remaking the game when it comes to winning in the United States. But maybe not for the better. That remains to be seen. TIME managing editor Nancy Gibbs explained the choice in a piece for the magazine. She broke it down why he was the choice in one paragraph:

For reminding America that demagoguery feeds on despair and that truth is only as powerful as the trust in those who speak it, for empowering a hidden electorate by mainstreaming its furies and live-streaming its fears, and for framing tomorrow’s political culture by demolishing yesterday’s, Donald Trump is TIME’s 2016 Person of the Year.

In the cover story, TIME's Michael Scherer paints the picture of a ruler far removed — quite literally, up in Trump Tower — from the everyman who elected him. Even Trump himself gets it. "What amazes a lot of people is that I’m sitting in an apartment the likes of which nobody’s ever seen,” Trump tells Scherer. “And yet I represent the workers of the world.” He maintains he's representing them; he and the working people love each other — despite his Cabinet which looks to be the richest in history.

Scherer points to Trump's unique ability to focus on jobs, and how he alone can bring more as his reason for winning — as that was the message that resonated with the less than 100,000 people who decided the election in Wisconsin, Michigan, and Pennsylvania. The idea that he could "make America great again" by returning jobs (despite the facts that contradict) explain why he won these voters and the presidency, despite losing the popular vote by more than 2.6 million. Now how he moves forward as president to effect the change he promised.

In 2016 — as in recent years past — TIME opened up an online poll to see who the world thought the winner should be. The results clearly favored Indian president Narendra Modi. As TIME noted, he has overall high approval ratings in India (despite a recent currency policy that proved a headache for the country's businesses dealing in cash) and was a key player at the Paris Climate Change accords. Winning 19 percent of the vote, most of them came from India, California, and New Jersey. The next most-voted were Barack Obama, Donald Trump, and Julian Assange with 7 percent each. Trump's Election Day opponent, Hillary Clinton received 4 percent.

Of course the online voting doesn't actually choose the winner. This year, Donald Trump was selected from a short list of 11 finalists that included famous politicians, scientists, inventors, athletes, and artists. Clinton also made that list, as did Trump's friend and soon-to-be Russian counterpart Vladimir Putin. One group of scientists in particular was featured for their new technology that can literally edit the human DNA, which could resolve a huge number of diseases. Also getting a nod were the Flint whistleblowers that saved the community from drinking lead-poisoned water for the foreseeable future.

In the end, none of those influential people could hold a candle to Trump's bonfire of influence (considered a dumpster fire to plenty on Twitter). As Gibbs points out, whether his complete unending of the status quo will be for good or bad, remains to be seen. But it is a huge deal, and that's how you choose a Person of the Year.

More like this
Demi Lovato, Jessica Chastain & More Stars Celebrated The 4th Of July By Protesting
By Jake Viswanath
For These Abortion Clinic Volunteers, Going TikTok Viral Is A Risk Worth Taking
By Audra Heinrichs
YouTuber Runs Into Margaret Sanger’s Grandson While Filming
By Alexis Morillo
Every Single Big & Small Way You Can Fight For Abortion Rights
By Tess Garcia
Get Even More From Bustle — Sign Up For The Newsletter