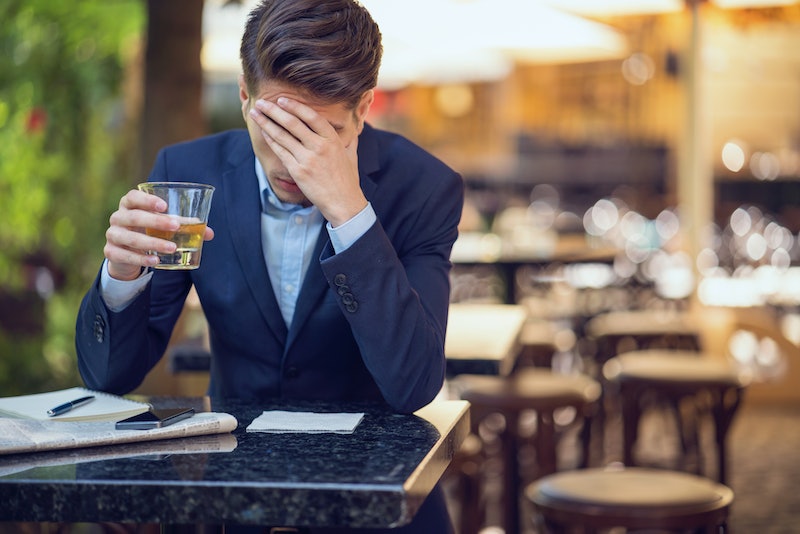 Although the stigma surrounding many mental illnesses, such as depression and anxiety, is slowly being broken down, many other mental illnesses remain dangerously stigmatized — including drug and alcohol addiction. Although many people now understand that depression and anxiety are caused by a combination of genetic and environmental factors, individuals who develop a dependence on drugs or alcohol are often blamed for their own illness — because many people believe that they can "just stop" turning to their substance of choice. This stigma is damaging on many levels and it stifles dialogue surrounding addiction. As a result, many of us aren't as educated about the illness as we should be. This is dangerous, because a lack of awareness means you may not recognize warning signs that you're at greater risk of drug or alcohol addiction than your peers.

To be clear, none of the following signs mean that you're destined to have substance abuse issues. But if they sound painfully familiar, you may need to keep a closer eye on your drinking or substance use than your peers. Most importantly, if you're worried that you're headed toward addiction or may already be suffering from it, know that it's a legitimate illness and seeking help is the smartest, bravest thing you can do.

These five factors can increase your likelihood of developing a dependence on drugs or alcohol.

1. You Have A Family History Of Addiction

Genetics aren't the sole determinant of who will struggle with substance use, but they account for approximately half the risk for alcoholism and addiction. Multiple studies have shown that addiction runs in families and, although no specific gene has been linked to addiction, research shows that genetic and biological factors play a significant role in whether or not someone is vulnerable to drug or alcohol addiction.

Individuals with immediate family members who suffer from addiction are at an increased risk. One study found that children of addicts are eight times more likely to develop an addiction of their own. If you have a parent or sibling who abuses drugs or alcohol, it certainly doesn't mean you're destined to suffer from the illness as well — but it does mean that you should monitor your substance use more closely than peers who don't have a family history of addiction.

2. You Have A Mental Health Condition

Unsurprisingly, people with mental illnesses such as depression, anxiety, and PTSD may turn to unhealthy coping mechanisms in order to numb their pain — and alcohol and drugs are often a quick fix for people who are in extreme emotional distress. According to a study published by QJM: An International Journal of Medicine, men who suffer from depression are nearly three times more likely to develop a dependence on alcohol, while women with depression are over four times more likely to become alcohol-dependent than peers who do not have depression. In an understandable attempt to self-medicate, 50 percent of PTSD sufferers become alcohol dependent and 30 percent develop a drug addiction.

So, if you have been diagnosed with a mental illness, be mindful of your substance use and make sure you're not using alcohol or drugs in place of healthy coping mechanisms. If you're already being treated for a mental health condition, it's worth having a chat with your doctor about red flags that you're headed toward an addiction of some sort. Remember, everything is confidential — so if, for example, you've recently begun using an illegal drug, don't be afraid to tell your doctor. You will not be punished for your honesty and your provider can make sure you get treatment sooner rather than later.

3. You Have Trouble Managing Stress

Numerous studies have found a strong link between chronic stress and addiction — long-term stress can even cause brain changes that make you more vulnerable to addiction. Of course, some people are pros at managing stress — we all have that one friend who balances 15 stressful professional and personal situations with apparent ease. But, not all of us are so lucky, and we need to honor that and be aware of it. It's the instinct of many people to reach for a glass (or a bottle) of wine after a stressful day — and that certainly doesn't mean everyone who enjoys a glass of chardonnay after a bad day will become an addict. But, if you find that reaching for alcohol or a joint is your immediate reaction to any stressful situation, then you may be at risk for addiction. If you're perpetually stressed out and you don't have any healthy coping mechanisms, that's definitely a red flag worth noting.

Although a person can become addicted to any drug, be aware that experimenting with certain drugs can lead to addiction far more quickly than others. Aside from nicotine, the most addictive substances are barbiturates (better known as "downers"), cocaine, alcohol, and heroin.

Again, not everyone who tries these drugs is destined to become an addict — but you're playing with fire when you experiment with these drugs, especially if you have a family history of addiction or a preexisting mental illness. By some estimates, 21 percent of people who experiment with cocaine will develop an addiction, and one in four individuals who try heroin will become addicted. Heroin is especially deadly, and cocaine use can permanently interfere with your body's ability to naturally produce the "feel good" chemical dopamine. So, be mindful that casual experimentation with these particular drugs can result in a long battle with addiction.

Evidence suggests that individuals who struggle with loneliness and social difficulties are more likely to develop an addiction to drugs or alcohol. Experts have speculated that loneliness can inhibit the brain's ability to exercise "executive control," which in turn puts people at greater risk of addiction. And, if you don't have a social support system, you're less likely to have a friend or family member notice that you may be struggling with a drug or alcohol problem.

Other studies have shown that individuals, especially teenagers, with social anxiety are at greater risk of developing an addiction. We all know that a drink or two can take the edge off in an anxiety-inducing situation, but for teens and adults with social anxiety, this can spiral into a dependence on a substance that makes them feel more comfortable and confident in social situations that would otherwise be incredibly stressful.

Only a doctor can diagnose you with substance abuse disorder — but, if you're at a greater risk than your peers, try to be mindful of how and why you choose to use alcohol or drugs. And, if you're concerned that you have a dependency, remember that it's nothing to be ashamed of, and the best thing you can do for yourself is talk to a doctor and get the help you need.