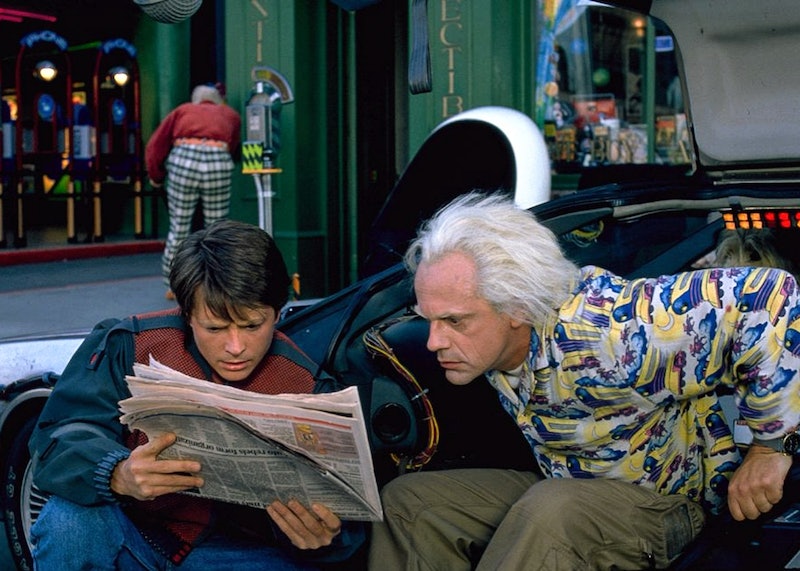 Approaching a new year, it's natural to look back on how you have grown and changed over the last 12 months. In the case of 2016, many feel like they have aged exponentially — so if this feeling sounds familiar, check out the best "me in 2006 vs. me in 2016" memes. This latest Twitter trend explores the cruel passage of time in a (mostly) humorous fashion... and goodness knows we could all use it. 2016 has taken a massive toll on us, and while some may be tempted to wipe it from their memories, this clever meme capitalizes on this dumpster fire of a year to become strangely healing.

The meme simply consists of two photos positioned side by side; one is meant to be an image the poster from 2006, while the other shows what the poster looks like in 2016. But this decade comparison is no "Throwback Thursday" spinoff: While many Twitter users have taken the meme's challenge literally, posting pictures of themselves a decade apart, the best entries take a little artistic license.

Using the meme's format, folks on the Internet are getting pretty creative and producing some hilarious commentary on how many feel about 2016. The trend even merited its own "Twitter moment" on Dec. 5, with the meme's "varying levels of seriousness" on full display. Some entries are touching and uplifting, while others highlight how things feel as though they've gone a bit off the rails lately. But if you're ever tempted to go back to 2006, just remember that was the year that Pluto was demoted to being a dwarf planet, Crash won the Oscar for Best Picture, and George W. Bush was in his second term as President. Oh how times have changed.

Let's take a walk down memeory lane with some of the absolute best 2006 versus 2016 memes that Twitter has to offer.

Some of the memes show that with time, we can become more ourselves.

Others approach the personal change metaphorically.

Back in the day we were fresh-faced and innocent, and now it seems time has left us a little evil.

I mean, everyone looks in the mirror and sees this from time to time, right?

Sometimes you wake up and you feel like a completely different person playing the same role.

Of course, some spot-on political commentary is to be expected as well.

And flames. Lots of flames.

Others go pretty dark within the confines of the meme, because, you know, time.

And some comparisons are just downright eerie.

What a difference 10 years can make.