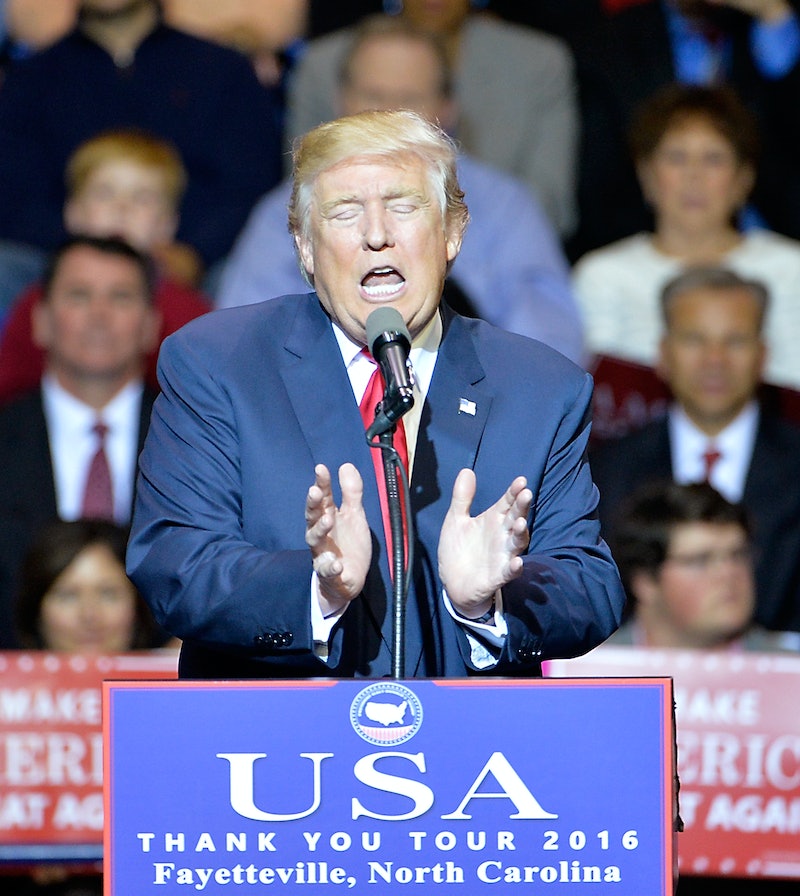 Thanks to real estate magnate Donald Trump's upset electoral college victory, despite losing the presidential popular vote to Hillary Clinton by more than 2.7 million, he's now the President-elect of the United States. And that coveted title brought with it a major media recognition this week, as he was named TIME magazine's 2016 "Person of the Year." So, in that spirit, here are nine ways Trump changed 2016 that TIME had to recognize, as much as you might like to never see his face again, let alone on a magazine cover.

It's worth noting that winning TIME's annual distinction is not always a portent of a successful, humane leader, as past victories for Hitler and Stalin constantly remind. Basically, it's an award you can win any number of ways, whether through positivity or negativity, appealing to the better or more troubling impulses in humankind. It's basically an impact award, and on those grounds, Trump's win is hard to take strong issue with, even if you disagree with it.

Here are nine reasons Trump secured this distinction this year, all of which weren't overlooked when the time came to name the top spot:

1. He's Going To Be The President

This one's simple enough ― Trump is going to be the most powerful person on Earth, and that's a fact that typically earns someone a TIME "Person of the Year" title. In fact, the last President not to win this recognition was Gerald Ford, who was never actually elected.

2. He Upended The GOP Establishment

Like him, hate him, or really hate him, Trump did engineer a successful, hostile takeover of the Republican primary, and he did it while visibly spending less time or effort preparing and practicing and learning policy than any of the other major candidates. To the contrary, he carved out a vague yet politically savvy set of priorities ― combined with oodles of pandering to misogyny and white racial resentment ― and cobbled together a coalition he rode to victory.

3. He Defeated The First Woman Nominee

The same reason his victory was such a devastating blow for so many people ― especially older women who supported Clinton and may never now witness a woman president in their lifetimes ― is a mark of achievement for Trump, albeit more in infamous fashion than a positive one. Simply put, Clinton ran of a message of progress and moving forward, and Trump ran on largely the opposite. And despite the fact that Clinton's political coalition was decidedly in the majority, Trump's won out on the electoral map.

4. He's The First President Without Any Relevant Experience

Trump has never held previous public office, nor been a member of the U.S. armed forces ― and in fact, throughout his run, he showed a fair amount of contempt for people who have. He's the first person to ever be elected president without either of those backgrounds.

5. He Forced Us All To Keep Thinking & Talking About Him

Countless observers throughout 2016 theorized that Trump ran for president not to win, so much as to prove his doubters wrong.

Having your finger on the button of America's nuclear arsenal, and the full might of the military at your call sort of sends your potential impact on the world soaring off the charts. So it will be for Trump, who's set to become the most powerful military leader for at least the next four years, and quite possibly the next eight years if the Democrats don't get their act together by then.

7. He Won Despite Losing The Popular Vote

For a sense of contrast, George W. Bush won the electoral college in 2000 while losing the popular vote, but he only trailed Al Gore by a six-figure margin that now seems quaint ― 543,816. Trump, on the other hand, is currently running behind Clinton in the popular vote by more than 2.6 million, and despite his obviously self-aggrandizing rumor-mongering to the contrary, that's not fraud, it's the sign of a minority coalition.

8. He Won Without A Majority In The Primary

Suffice to say Trumpism is here, and it's a genuine and distinct threat to progressive and democratic values. But it's also a political philosophy that was a minority movement in the Republican party, and a minority movement across the United States.

Usually presidents have to get re-elected to win this honor a second time, but in Trump's case he's already on his second go-around. That's because Trump was also awarded the TIME Person of the Year award back in 2006.

So while some may want to say it's TIME's "fault" that Trump was awarded this title, these nine things prove that he completely changed and redefined 2016 in a way that couldn't be ignored.