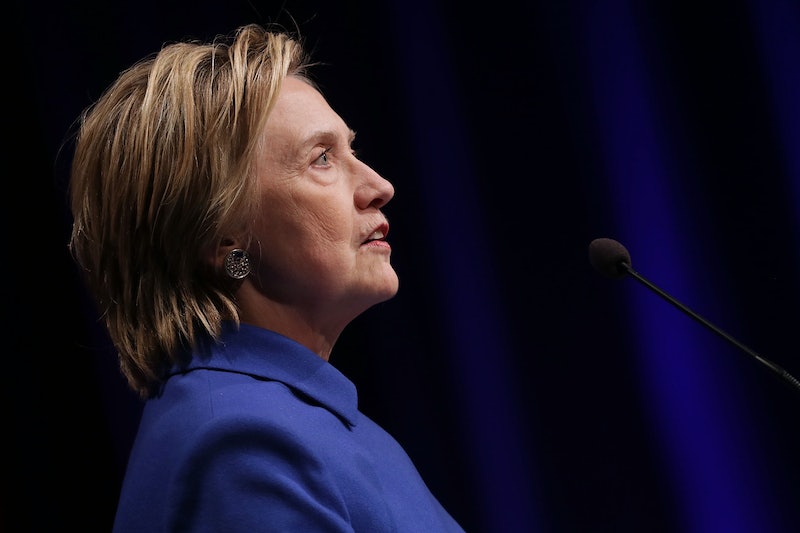 In its annual postmortem of the year, TIME Magazine released its perennial list of top influencers for 2016, and this year's No. 2 is a familiar face. Hillary Clinton, who was runner-up in the November presidential election, also came in second to Donald Trump in the Person of the Year contest. But TIME's article on her election and legacy seems to have underestimated why the loss happened. TIME's assertion that the presidential election was not about gender is infuriating, because it ignores the massive setback that Clinton and her campaign had to contend with before the race had even begun.

The TIME article on Clinton is largely an examination of the role of gender in the campaign this year, which the author contends was not an ultimate factor in her loss:

In the autopsy of the doomed Clinton campaign, there is no shortage of fatal causes. Expectations certainly missed their target: the race between the first plausible female presidential candidate and a man who bragged about grabbing women "by the pussy" did not boil down to gender.

I absolutely fail to see how that doesn't boil down to gender. The things that men can get away with and the things that women can get away with are so obviously, completely different that gender can't be ignored. Gender was a fundamental bias running through the entire election. Underneath almost every major criticism against Clinton, there was an aspect of either benevolent or hostile sexism, while at the same time, Trump was given the privilege to say and do what he wanted without consequence.

To say that this election didn't hinge on gender is insulting to all women. To say that the ceaseless scrutiny on Clinton's emails wasn't a sexist attack is reinforcement of a double standard that's taken still playing itself out in Trump's team of advisers. To say that gender was no motivation in choosing a president who essentially confessed to being a serial sexual predator over a woman is ignorant of the problem at hand. Clinton didn't lose because she's a woman, but her gender absolutely contributed to her dismissal by the American public.

The article continued trying to explain why sexism wasn't a central factor in Clinton's loss, once again proving the antithesis of its argument. "In interviews across the country in the year leading up to the election, many voters suggested that shattering the glass ceiling wasn't an urgent priority for them. Some took it as a given that a woman will be President one day, and it wasn't worth electing someone they believed was the wrong woman just to show it could be done."

The urgency of the priority is where sexism once again comes in to play. For almost anyone living the experience of being a woman or anyone else paying close attention, electing a female president should have been a top priority. Just as President Obama's election brought tough questions and some breakthroughs on race relations, the United States needs the glass ceiling shattered. Having a female president in the White House should have been a top priority for everyone who wants to see all women achieve true equality, because the trickle-down effect of normalizing female leadership is a proven way to transform this country.

That's not to say that Clinton should have been elected solely on the basis of being a woman. That's just as bad a reason for electing a president as "Well, at least they're not the other guy." What it does mean, however, and what TIME seems to have missed in its analysis of Clinton's loss, is that the public owed Clinton the respect and consideration of fervently addressing internalized and expressed sexism throughout the election. That simply didn't happen. In the swirling vortex of the 24-hour news cycle, 18-month campaign season, and increasingly bitter partisanship, the horse race of the campaign eclipsed a larger national conversation about how to really give Clinton a fair shot.

TIME is right in that there were other flaws in the Clinton campaign that also led to her defeat, but trying to claim that she didn't suffer from a disadvantage due to her gender is just enraging. Ignoring the widespread, deep, and sometimes invisible effects of sexism does Clinton a huge disservice, and she's already taken too many injustices this year.