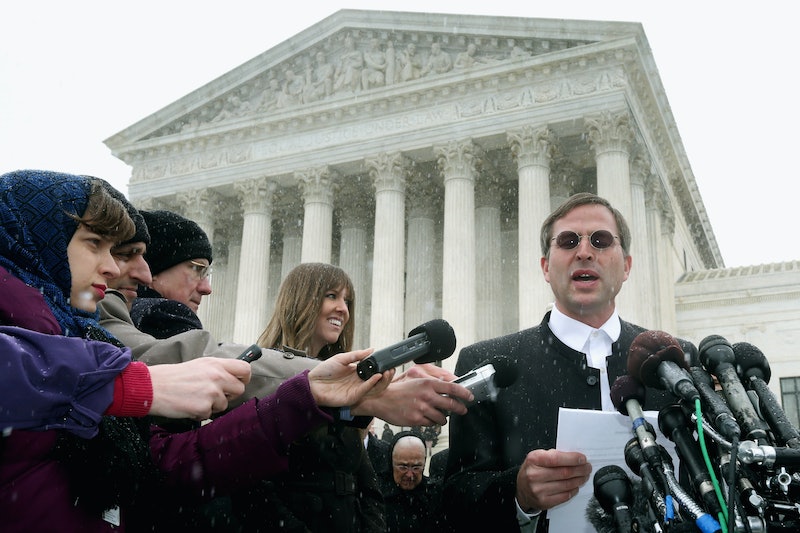 Is this the result of some shady craftwork, or was Hobby Lobby truly unaware that these companies were doing business that directly clashes with its religious beliefs?

The report found that Hobby Lobby's 401k retirement plan has holdings with companies like Teva Pharmaceutical — which makes the morning-after pill Plan B — as well as Actavis, which makes Ella and a similar generic version of Plan B. There are also ties to Pfizer, AstraZeneca, and Forest Laboratories — all of whom have drugs used to induce abortions. In addition, Hobby Lobby has holdings with Bayer, which produces the IUD Mirena.

Hobby Lobby, which is owned by the Green family, is challenging the provision in the Affordable Care Act that requires employers to cover birth control in their employees' health insurance plans. The owners say that's a direct threat to their religious freedom, because they consider some forms of contraception and IUDs to be abortion devices.

In fairness to Hobby Lobby, many people and companies have holdings in retirement funds without knowing exactly what's in them, the Huffington Post points out.

The pharmaceutical companies tied to Hobby Lobby are very large and manufacture a broad array of products. However, the report does make Hobby Lobby look quite hypocritical, says Elise Foley, a Huffington Post politics and immigration reporter.

"It really does undermine their argument that they are a company that has these moral views and they can't be getting involved with something like Plan B, when they're already involved with Plan B, so it's certainly something that I think they'll be displeased to have reported."

Another Mother Jones report points out that 71 other for-profit companies besides Hobby Lobby have opposed the ACA's birth control mandate, and 46 cases are still in limbo. (Hobby Lobby is probably the largest company, and has the snazziest name.) If the Court rules in Hobby Lobby's favor, it would probably affect these cases as well, plus open up other ways companies could avoid federal laws on the basis of "religious freedom."

Hobby Lobby has not made a public statement about the findings yet.