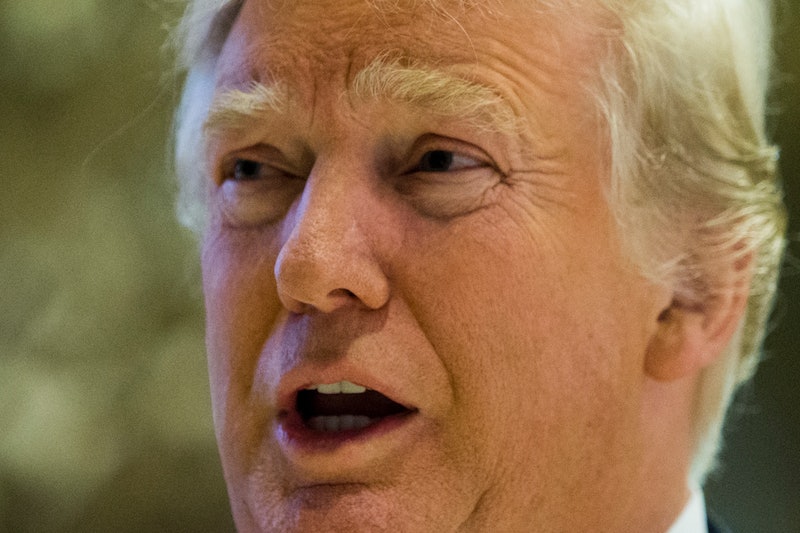 After almost two years of constant Donald Trump coverage, you might think it's neither surprising nor consequential that TIME Magazine just named him its Person of the Year for 2016. Since June 16 of last year, Trump has been spewing hateful, divisive, and uncivil rhetoric that has already eaten away at the fabric of this country's democracy. Thus, I believe that in selecting the president-elect, TIME chose to dangerously normalize Trump as its Person of the Year.

"For reminding America that demagoguery feeds on despair and that truth is only as powerful as the trust in those who speak it, for empowering a hidden electorate by mainstreaming its furies and live-streaming its fears, and for framing tomorrow’s political culture by demolishing yesterday’s, Donald Trump is TIME 's 2016 Person of the Year," TIME's managing editor Nancy Gibbs wrote in the article explaining the magazine's choice.

To me, though, this explanation misses the mark of Trump's true 2016 legacy, and it feels like Gibbs is talking about a different election. Trump's real effect is division, fear, distrust, anger, and self-interest, and his election and his campaign must always be contextualized by acknowledging that.

The way TIME's selection of Trump is framed makes Trump seem like some kind of political whiz. Realistically, Trump pretty much failed his way to the top. He lost the popular vote — by 2.5 million and counting according to the latest from the Cook Political Report.

Gibbs explained that choosing Trump for Person of the Year isn't an endorsement of his behavior or policies, it's simply an designation to show that he had the most influence over the news this year. After all, Adolf Hitler was TIME 's Man of the Year in 1938, and the magazine certainly didn't approve of his actions, even before he began a continental genocide.

However, unfortunately, I sincerely worry that news just doesn't really work that way, especially not now. The never-ending news cycle is such a huge and inextricable part of American culture that there's little room for nuances like the ones TIME is trying to communicate. While on one level the magazine accomplishes its goal of unbiased selection of the top influencer, the undercurrent of the decision to make Trump the Person of the Year means that his deplorable actions and ideologies receive attention, which is currency in today's digital economy.

There's a clear difference between coverage and normalization. With the Person of the Year designation, Trump was normalized when his actions were presented in a way that put all the focus on the cultural change he inspired in a vortex, without respect for the ways they managed to harm and discredit the political system, the institution of journalism, and the lives and existences of millions of minorities and marginalized communities. And with that, Trump's rise to unchecked power continues.