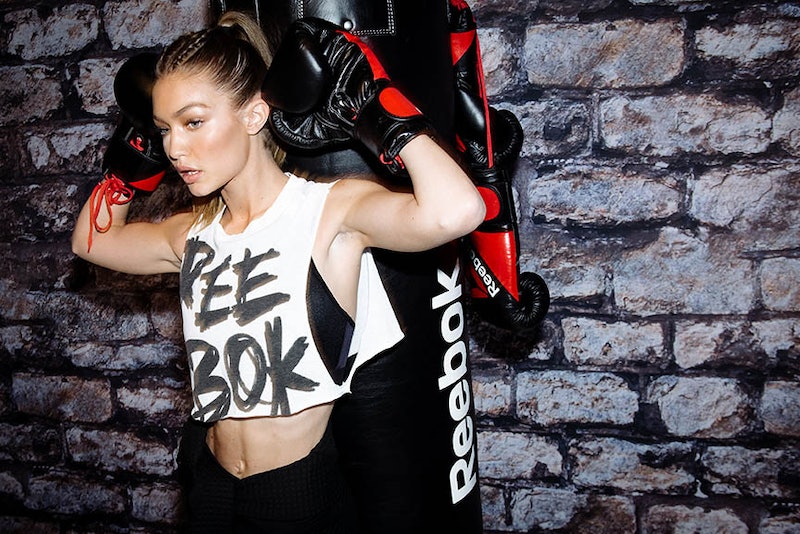 Everyone has self doubt, but most people might not think one of the biggest supermodels in the world right now does, and they would be dead wrong. "Regardless of what your job is or what people expect from you, you are allowed to be human," Gigi Hadid tells me at an event celebrating her Reebok campaign launch. I was totally totally shocked.

When I first walked into the event on Wednesday, I was confronted with my own doubts: Am I going to survive this boxing class? Are my interview questions for her stupid? Do these leggings look weird on me? That's when I turned a corner and almost walked into a wall plastered with massive signs reading "#PerfectNever" and "Be Human" everywhere. Alright, maybe I got this.

Seriously, as women we doubt ourselves way too much, every day, and it's got to stop, which is exactly why Reebok teamed up with Gigi Hadid to honor the notion that perfect is bullshit and boring. If you're perfect, how do you achieve anything else or move forward from there? Spoiler alert: You don't.

To the millions of young girls, aspiring models (and countless guys with crushes) everywhere, this is what seemingly perfect looks like:

But Hadid wants you to know she's far from it.

"It’s hard to feel like you’re understood on a full level. People say OK you’re a model, but you should be more than a model. You have to show that you're smart, you have to talk, you should host this show, do this, be funny, be able to stand next to this person, don’t just be a model, also have an opinion. And then when you get up there and you do it and you put so much energy into trying to be your best and make everyone happy, there are still 50 percent of people who are like, 'That wasn’t good enough.' You're like, what's the point or why put yourself out there?"

I mean, here's a girl who just slayed the Victoria's Secret runway in Paris, is larger than life (literally on every billboard in every major city), dates a hottie musician, has a girl squad that rolls like 50 deep, has flawless bone structure, and can do this thanks to her Gotham Gym trainer Rob Piela:

One would think she has everything, but on the contrary — she's human just like the rest of us, struggling with finding her footing. Her footing just happens to be clad in a designer stiletto in a world that revolves around appearances, social media criticism, and haters — which can give anyone a bout of major anxiety.

"Sometimes I have to sit myself down on the bed and go 'You are a good person. Everything you do you do with a good heart and good intention. Sometimes you just have to call your friends and have them remind you that you're a good person."

Speaking of those friends, as the newest brand ambassador for Reebok, Hadidi also called upon a few of her famous besties for the day to host the ultimate girl panel pow-wow:

Lena Dunham, Zoe Kravitz, Jessica Mendoza, Ruby Rose, and Aly Raisman joined G onstage for an hour-long convo about how it's 100 percent OK to be imperfect. You can watch that magical livestream here (and you should because it will give you all the feels).

While a lot of us have faced imperfection at a young age, it was actually the opposite for Hadid.

"I know it sounds weird because I did always want to be a model, but more because I loved fashion images. I was never trying to be a model growing up. I never thought about my weight or how I looked and I think that was because my mom was always like, 'You worked really hard for that' — that was a great thing. She was never like, 'You're so beautiful' and I never thought about myself in that way. I took pride in being an athlete and I took pride in working really hard," she tells me.

"That was a major part about why she wanted me to wait to model. She wanted me to have an image of myself and the confidence in myself to go into an industry that was going to judge me. What's crazy is that all my confidence came from very unsuperficial things. Once people started to be like, 'You're fat,' I was like, dude, that's not fat, that's 10 years of working my ass off and that's why I have this muscle. It was nice to be able to look back and have a sense of confidence besides just what I looked like."

Body shaming is never OK, but my new favorite model has a few tips for how to deal when someone (or a lot of total strangers) stress you the F out. Her trick? Scream. Into a pillow, as loud as you can, or out at the ocean. "Also, the physical effect of punching something is really good," she jokes referring to her jab, cross, hook. "I always go back to the mental part of working out. When you're so focused on something, it's hard to think about something else."

And if that doesn't work or you're not quite sure about stepping into the ring, you can also ingrain her self-love motto into your brain and tell yourself: "I'm badass and I deserve to be here."

Damn right, Gigi. We all do.

More like this
Most Comfortable Underwear For Big Butts
By Audrey Williams
Gigi Hadid Is Officially In Her Weird Girl Era
By Dominique Norman
11 Bella Hadid Hairstyles That Prove She's A Beauty Chameleon
By Jordan Murray
42 Black Owned Fashion & Beauty Brands To Support Today & Always
By Mekita Rivas, Shea Simmons, Kui Mwai and Dominique Norman
Get Even More From Bustle — Sign Up For The Newsletter