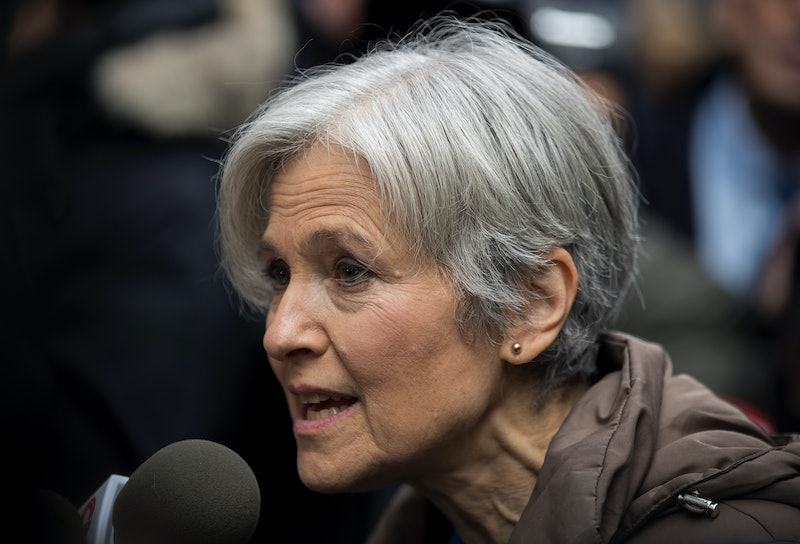 A Michigan judge ordered that the state start its vote recount on Dec. 5, but by Dec. 7, he had changed his tune and halted that very same recount. You might think this effectively knocks out Green Party candidate Jill Stein's recount effort, but according to her team, the Michigan vote recount isn't stopping Stein.

U.S. District Judge Mark Goldsmith had originally ordered the ballot recount to start at noon on Dec. 5 so as to complete the recount by the Dec. 13 soft deadline before the Dec. 19 Electoral College vote. But the case came back to him when a Michigan Court of Appeals panel rejected the recount after determining that Stein was not considered an "aggrieved party" in the election. (Due to her fourth place finish in the state with around 1.1 percent of the votes, it wasn't considered realistic that Stein could have actually won the election.) Goldsmith upheld this decision and lifted his previous order, citing the lack of evidence of "significant fraud or mistake" in his decision.

Interestingly enough, Stein chose to spearhead vote recounts in battleground states rather than her opponent Hillary Clinton, who won the popular vote over President-elect Donald Trump. And for Clinton, whose campaign agreed to cooperate with Stein's effort, not winning Michigan's electoral votes in the recount effectively puts her out of the running to overturn Trump's Electoral College victory. (She needed to win Michigan, Wisconsin, and Pennsylvania to put her vote count ahead of Trump's.)

But don't take this to mean Stein is done with the recount effort; the Stein campaign's lead lawyers in Michigan, Hayley Horowitz and Jessica Clarke, said in a statement that they "are not backing down from this fight — a fight to protect the hard-fought, hard-won civil and voting rights of all Americans. Our campaign will seek immediate relief in Michigan's Supreme Court to ensure the recount that is already underway in all Michigan counties continues." Stein's campaign also cited alleged irregularities with voting machines, hacking, and possible voter suppression in Michigan.

The Green Party candidate's effort, for which she raised millions of dollars, is about the principle of fair elections, rather than changing election outcomes, she said. "I do not favor one candidate over the other among the establishment candidates," Stein told NPR. Even if the election results don't end up changing, Stein's recount effort could help make audits of election results become the norm rather than the exception.

Despite Stein's concerns about possibly inaccurate election results, Goldsmith said her campaign presents "speculative claims going to the vulnerability of the voting machinery — but not actual injury," The Guardian reported. In other words, Stein's campaign didn't show Goldsmith enough solid evidence of issues with the election results for him to find a recount necessary. Unfortunately, even with Stein's campaign appealing the halted recount, time may be against them considering the upcoming deadline for recounted vote tallies. Still, it is clear that the recount effort has brought a lot of attention to the issue of reviewing election results; hopefully this paves the way for a more streamlined method of auditing elections.