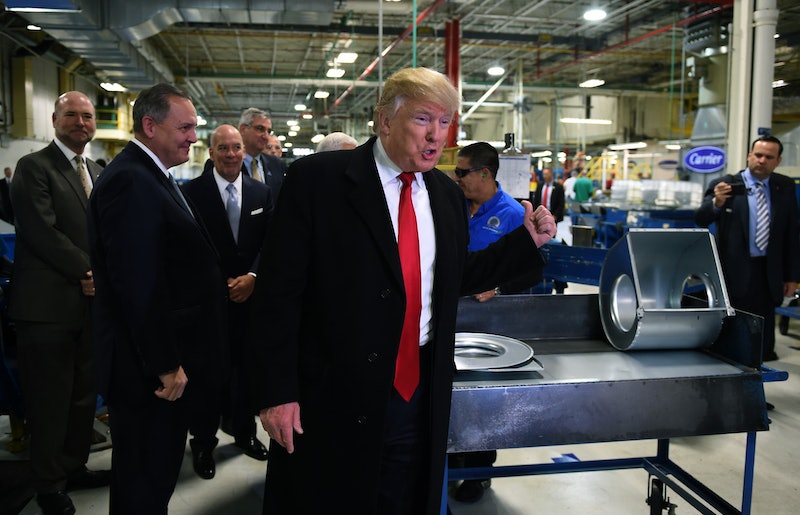 Donald Trump famously made a promise to Indianapolis' Carrier factory workers months before being elected the next President of the United States. Now, that promise is back in headlines, but not because Trump honored it entirely. Initially, Trump said he would prevent jobs at the plant, which manufactures products like furnaces and air conditioners, from being moved to Mexico. It may seem like Trump has transformed this pledge into a reality, but Carrier union leader Chuck Jones has a different view of the situation.

Jones is the president of United Steelworkers Local 1999, a union that happens to represent lots of Carrier employees. The union president reluctantly voted for Democrat Hillary Clinton in the presidential election, calling her "the better of two evils," according to The Washington Post. Still, Jones told the Post he was hopeful about Trump's pledge to save factory jobs. But Jones later found out that under Trump's deal, 550 jobs could still be reportedly lost, according to the union, and that out of the 1,100 jobs Trump publicly proclaimed to have saved, only about 800 could supposedly be attributed to his Carrier deal.

Though Jones and Trump didn't directly interact during a meeting about the deal on Dec. 1, Jones clearly isn't afraid to speak his mind. He told the Post:

But he got up there and, for whatever reason, lied his a** off ... Trump and Pence, they pulled a dog and pony show on the numbers. I almost threw up in my mouth.

Though the deal did save hundreds of jobs, it ultimately wasn't all Trump cracked it up to be. And if you thought the President-elect was not going to tweet about Jones' comments, think again. Trump was quick to throw insults via his favorite social media platform. After Jones' appearance on CNN's Erin Burnett Out Front on Dec. 7, Trump took to Twitter to say how Jones "has done a terrible job representing workers. No wonder companies flee country!"

But Jones maintains that Trump should have been upfront with the alleged 800 job number. "I didn't attack him," Jones told Out Front. "I just called him out on what I felt like he misled the people."

Jones' willingness to stand up for workers and hold Trump accountable is being praised by Twitter users, who are expressing on social media why #ImWithChuck.