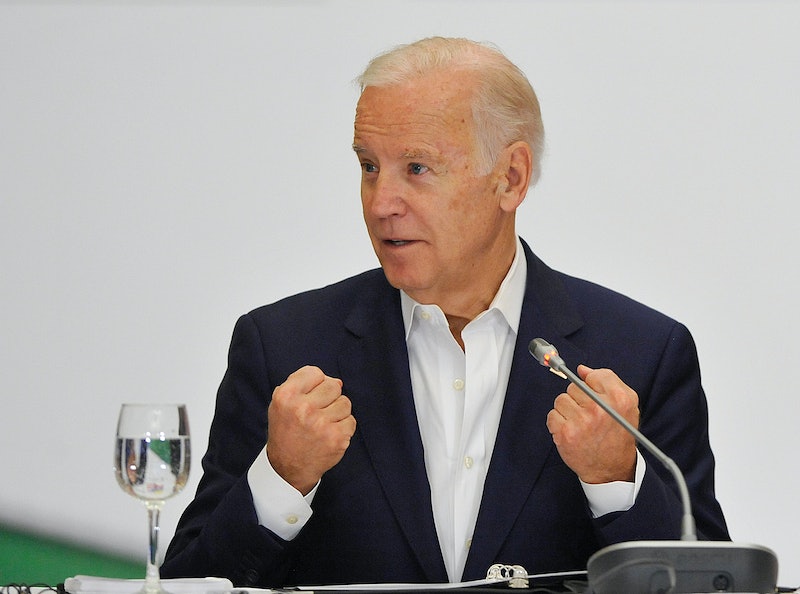 One thing about Joe Biden, is that he likes to tell it like it is. No malarkey from him — unless it's the word "malarkey" playing over and over again like a broken record as he accuses his political opponents of being full of it. In essence, he says what he thinks. This habit sometimes results in gaffes, when he says more than he's supposed to let on, uses a swear word, or otherwise says something less than appropriate. But that's not the takeaway from the VP. He's a very sincere and caring politician, and these nine Joe Biden quotes show how honest he is with the public regardless of the topic.

Evidently, a couple of years ago he wanted to be taken more seriously — but there's really no need for him to button up his honesty. Maybe his discretion needed some work, as he almost caused an international incident in 2014 when he said that Turkey had let some fighters through to Syria. But in general, using the same honesty to talk about serious issues that the American public cares about can do the same thing. Over the past year, he seems to have polished his public comments, while staying true to himself.

Here are nine sincere, honest quotes from Biden to keep in mind until 2020, because you never know what could happen in politics:

Biden, who was really stuck as to whether or not he should run for president in fall of 2015. He and his family were suffering from his son's death and ultimately he decided against it:

While I will not be a candidate, I will not be silent. I intend to speak out clearly and forcefully, to influence as much as I can where we stand as a party and where we need to go as a nation.

Biden introduced Lady Gaga at the Oscars to talk about the need to continue fighting campus sexual assault. Even with the focus on motion pictures, he told the truth about an all-too-real reality facing many Americans:

Despite significant progress over the last few years, too many woman and men on and off college campuses are still victims of sexual abuse.

Biden arguably jump-started Obama's evolution on marriage equality back in 2012. It's nice to see he's staying true to his values on LGBT rights. He tweeted in August: "Proud to marry Brian and Joe at my house. Couldn't be happier, two longtime White House staffers, two great guys."

After he decided not to run, he went out to stump for Hillary Clinton — and he made the winning argument (at least if we're talking the popular vote) that she has your back:

What Hillary is all about is making sure that every one of you, every one of you can look your child and your grandchild in the eye and say, ‘Honey, I mean this sincerely, everything is going to be OK.

5. Trump On The Other Hand

He was channeling the post-election playlist here: "When I listen to some of the stuff Donald Trump says it just makes me sad."

After all of the anti-Mexican rhetoric from Trump — be it his comments on rapists or the border wall — it became clear Biden did not approve, and he let it be known when on a trip to Mexico. He said to Mexican President Enrique Peña Nieto:

I almost feel obliged to apologize for some of what my political colleagues said. It's a heated campaign season and I just want you to know, Mr. President, that the most heated rhetoric you've heard from competitors for the nomination for president is not who we are as the American people. It is not the view that is the view of the majority of the American people. It's the exact opposite. It's the opposite view.

7. The Smart Ones Are Feminists

Biden, stumping for Clinton during the campaign season, laid it out simply, how he felt about feminism and that men should be feminists: "I’m not asking all you guys to all of a sudden become feminists, though if you’re smart you would."

Whether or not you think the Clinton campaign erred in not focusing more on the economic problems facing the white working class, it's probably fair to say that some more focus couldn't have hurt — given it was white people in rust belt states that lost her the election. Biden, speaking on Hardball in November, spoke about their disconnect from the party:

Now if you liked what you've read above, this next quote might really resonate with you. In the end, it sounds like Biden doesn't actually intend to run in 2020. But there's a part of him that says publicly that he will, and jokes tend to be based on truth, at least in part. Speaking at the Senate he gave political pundits and Democratic fans some hope: "I’m going to run in 2020 ... For president, what the hell, man, anyway."

Now if you weren't already a fan of Biden before, his blunt honesty has to mean something. Any claims to the contrary, and I call malarkey.