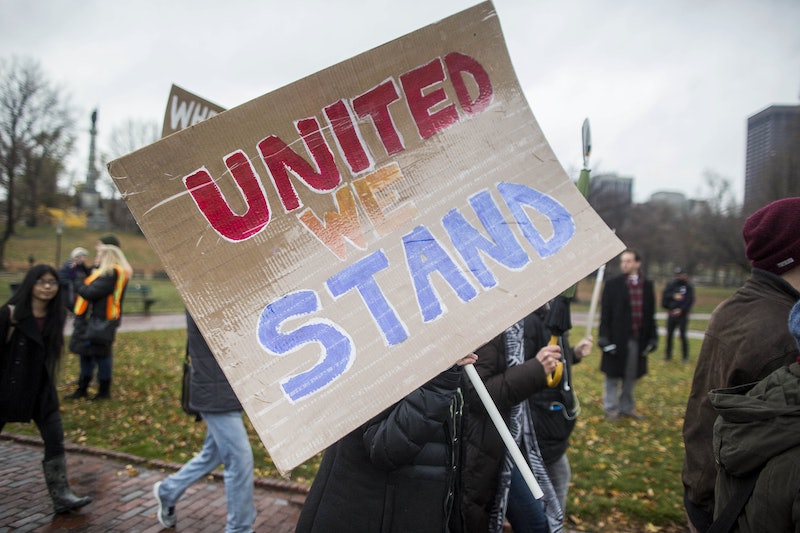 A small group of electors has formed with the intention of denying Trump the presidency through what would be an unprecedented use of the electoral college. They've dubbed themselves "Hamilton Electors," and as of Wednesday, they've added a new member in Levi Guerra. The 19-year-old Democratic elector from Washington announced that she would join their cause, and try to persuade fellow electors to choose a different Republican candidate, citing worries about the troubling example Donald Trump presents for her younger generation.

Guerra is in a unique situation because, as an elector from Washington, she is currently pledged to vote for Secretary Clinton. Perhaps the impossibility of Clinton reaching the necessary 270 electoral votes provides Guerra with more cover to break ranks and act in the hope of stopping Trump, even though it will mean the president is still a Republican. (Should all Democratic electors cast their ballots as they're supposed to, Clinton will receive 232 votes.) That is certainly the case for the other seven Hamilton electors, all of whom are fellow Democrats. Their pitch for Republican electors? Vote with us for a better-suited Republican, such as Gov. John Kasich.

It's an argument that makes a lot of sense, especially considering the widespread Republican resistance to Trump, right up through the summer's Republican National Convention. Even there, a small group of rebellious officials and state electors made an attempt to oust Trump as the nominee, but everyone knows how that quest ended. Republican electors might be right to fear permanent blackballing if they reject Trump, even if it's what they want to do. So far, just one Republican has publicly announced that he will not vote for Trump — Texas elector Christopher Suprun, who sees Trump as manifestly unfit to unite the nation.

The risk for Democratic electors here is unclear. Is it more important to remain faithful to the party and vote for Clinton, or is stopping Trump at any and all costs the proper course of action? For Guerra, the answer is clear. As she stated, "I'm only 19. And this is my first time being involved in politics, but I'm hoping that my willingness to put my country before my party will show that my generation cares about America."

Guerra's commitment to country over party is certainly a welcome break with the rigid partisanship Americans have come to expect from 21st century politics. And it seems "Hamilton Electors" is aptly named, considering the founding father of current Broadway fame was himself but 21 years old at the start of the American Revolution. Perhaps Guerra and her fellow rogue electors might track down and focus their efforts on other young, likely more idealistic, electors to fill the ranks of their cause.