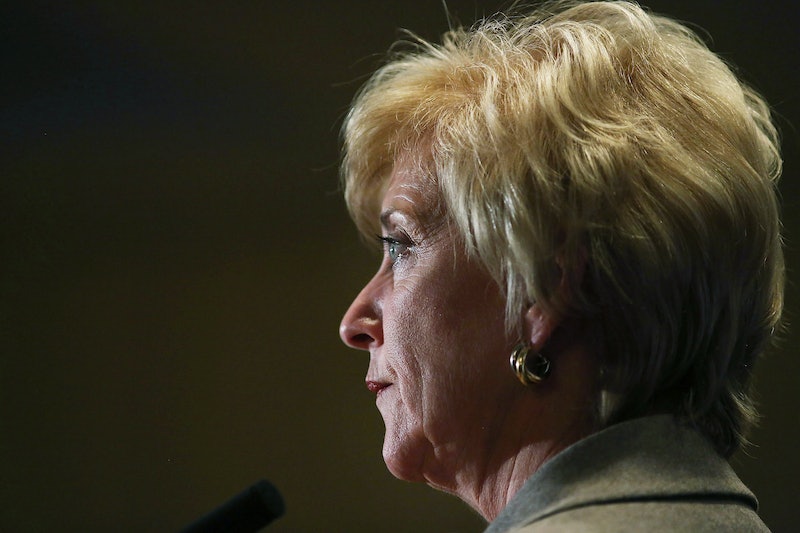 Like many Americans, I don't watch much WWE TV. Prior to research for this article, I hadn't seen even a clip of the faux-fighting since a high school party, and that single memory itself is hazy on the details. But since Donald Trump just named Linda McMahon as head of his Small Business Administration, it seemed pertinent to investigate whether she had made any appearances on her own billionaire-making enterprise, WWE TV. After all, she and husband, Vince McMahon, built an enormous profit from it, and he has certainly featured prominently on the network (more on that sick saga later). To my surprise, not only has Linda McMahon joined the circus, but she's done it more than once, often alongside her daughter.

For those like me, the WWE TV uninitiated, the clips below might be offensive. I'm not usually one for so-called "trigger warnings," but the innuendo and message coming out of the world of WWE TV is exploitative and misogynistic. Yes, I know the fights are fake. But it's not the fighting itself that is so upsetting. It's the gender stereotyping that gives way to violent chauvinism on display – that's where the real sickness lies. Provided below is a brief list of some of Linda McMahon's WWE TV appearances, in descending order of disturbing.

The title pretty much says it all, though there's less fighting and more cowering on the part of McMahon. That the scene closes with her "needing" paramedics would be a little disconcerting, but taken in the context of WWE TV as a whole, this one is pretty breezy, actually.

It's probably not worth anyone's time to get into the faux drama behind who Jim Ross is to the McMahon family, and what his exact crime was that earned him an "official" firing. Whatever the case, Linda joins her husband and daughter in the ring to let Ross know he's out of a job, and gives Ross an apparent kick in the crotch for good measure.

3. She Fights Her Husband Vince, While His Mistress Watches

It's like a whole season of soap operas slung into one title. In this scene, Linda really does team up with her daughter, Stephanie (who appears to have her own WWE fighting career going), while she takes on her father (Linda's husband), apparently because he's been cheating on mom with Sable. Can you believe this? And just think: McMahon now has a position in the White House.

4. The Father/Daughter Fight In Slow Motion

In case you somehow missed that incestuous suggestions were in the previous fight, the McMahons bring the family dysfunction back for a second time. This clip breaks the father/daughter wrestle down into a slow-motion montage, and Linda's there to cheer it all on from outside the ring.

While you can't choose all your family, you do, in fact, get to choose your spouse. So here is a brief introduction to Linda McMahon's husband, in what is no doubt one of Trump's proudest moments.

While Linda McMahon did not appear in the most grotesque videos, she is married to Vince McMahon, and the view of the world he promotes is one of sexual humiliation and violence. What began as what I imagined would be a funny article about the quirky background of one of Trump's new appointees instead revealed a woman who has happily profited off of exploiting the worst gender stereotypes imaginable. And that would be putting it nicely.