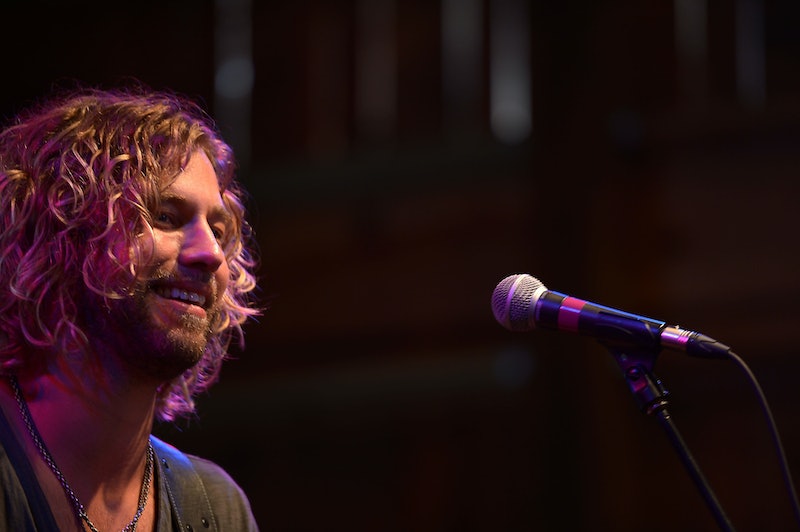 It's a bit odd, following Dexter Roberts' American Idol audition during Season 13, judges Keith Urban, Jennifer Lopez, and Harry Connick, Jr., barely blinked at the fact that Roberts was performing "Drive," a song by Casey James. Even though he's an artist that's not quite Top 40 material, it's a significant choice for American Idol fans watching. Because, of course, James happens to be the third place finisher of Season 9 of Idol. Perhaps the judges were not aware of such — Lopez didn't sign on until Season 10 and Urban until Season 12 — or perhaps the judges were simply not aware of Casey James. But that would be a shame, considering the country singer might have been the best thing to come out of the dreaded season that brought us Lee DeWyze, Katie Stevens, and (shudder) Tim Urban. So it's easy to hope that, come Idol's "Back to the Start" night, when Roberts will perform James' "Drive" for the first time since his audition, the world, and Idol's judges, start paying attention to James once again. (Update: Roberts, instead, chose to sing Brett Elredge's "One Mississippi," a song that audiences didn't see him perform during his audition.)

It's easy to not blame audiences or the judges for forgetting James — the contestant failed to make a huge impact on Idol, save a choice performance of John Lennon and Paul McCartney's "Jealous Guy." In fact, he was so forgettable during his Idol run, that most fans simply knew him as the contestant that judge Kara DioGuardi shamefully objectified, forcing him to remove his shirt in front of cameras for a spot to Hollywood. And, even after landing a record deal, he maintained the same under-the-radar status, with his debut single off of the self-titled Casey James, peaked at 21 on the country charts.

And despite the fact that his first post-Casey James single, "Crying on a Suitcase," only peaked at 24, there's no denying his talent. And there's no denying the incredibly catchy nature of "Drive." Listen to Roberts sing it during his audition here:

And James himself sing it live here:

It's enough to make you want to listen to more Casey James songs, which deserved more recognition, peak chart status be damned. Like, for example, the aforementioned "Crying on a Suitcase":

Or the more melancholy "Love the Way You Miss Me":

Or "Woman's Touch," which puts James in his blues guitar sweet spot, which he first unveiled on Idol with a cover of Ray Charles' "I Don't Need No Doctor":

And the perfect radio tune, "Undone":

So here's hoping Roberts' performance of "Drive" is not only successful for the Idol star, but also that it helps drive more attention towards one of the Idol alums who deserves it most, the perplexingly forgettable unforgettable Casey James.