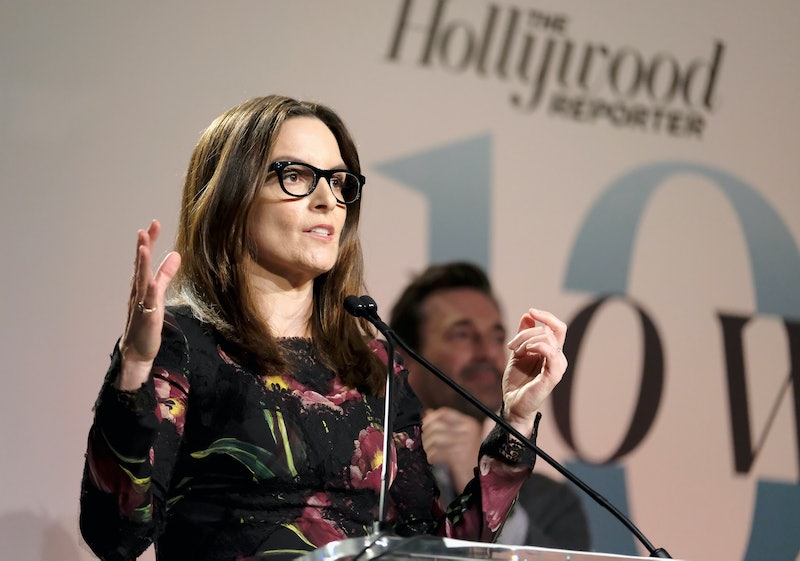 As a teenager, I always felt strongly that I wanted to be Tina Fey when I grew up, and now, she's giving me yet another reason to admire her. On Wednesday, Fey was honored at The Hollywood Reporter 's annual Women in Entertainment breakfast, and the speech she gave after being presented with the Sherry Lansing Leadership Award was pretty inspiring. She talked a lot about hot button issues like Hillary Clinton's loss and Breitbart, with her main focus being what it means to be a woman in Hollywood. Although a lot of her words were specific to what women experience as directors, actors, and writers, the advice and wisdom she shared is seriously useful to all of us, especially those of us who work in competitive fields.

She talked about how things change for her and her peers as they get older, as far as their job and goals go, and how her ideal job includes working three days a week (yeah, I think she's speaking for all of us there). She also pointed out how much misogyny exists in our world today, as if that needed pointing out. And even though I enjoyed everything she had to say — because she's Tina Fey and that's just how it goes — what really spoke to me was her real words of wisdom for women in the career world, particularly when it comes to a secret power many of us usually forget we have: the power of saying no.

"Whether it’s writing a pilot for a bad actor or the butter scene in Last Tango in Paris or telling Roger Ailes to put his hamburger meat back in the freezer, feeling like you can say 'no' without any negative repercussions is an important kind of power. And it’s one that we can help each other have — by believing and supporting each other."

It might be tinged with humor, but her words really ring true. I'll be the first to admit that, as a people pleaser, I'm horrible at saying no and famous for overextending myself because of it. But we do have that power, and Fey is totally right — saying no when you need to is a valuable skill, just like having the courage to say yes to new experiences. It's an unfair reality that this power is more difficult to come by as women, but maybe for that reason it's also that much more important to learn how to use it.

She also imparted a different kind of wisdom to the younger generation of women who come after her, and even though it may not be directly related to the career world, it's still pretty valid. "Don’t smoke," she said. "Wear a bra. Trust your instincts. Don’t f*ck John Mayer." It may be unconventional, but her advice is on the nose. I mean, when has anything good ever come from anyone dating John Mayer?

Fey may be right that it's a difficult time to be a woman, but it's a little bit easier because she exists. I will take her advice in the hopes that it will help me in my mission of becoming her when I grow up... and eventually, I hope to live her dream of working three days a week. It could happen, right?

More like this
Amanda Seyfried Reflects On 'Mean Girls' & "Gross" Remarks That Men Made After It
By Jake Viswanath
Sandra Bullock, Girlboss Extraordinaire
By Matt Harkins & Viviana Olen
Spice Girls’ Net Worth: The Richest Member Is Wealthier Than The Rest Combined
By Hugh McIntyre
Joe Alwyn Reacts To Taylor Swift Earning An NYU Doctorate In A Rare Interview
By Jake Viswanath and Nicole Pomarico
Get Even More From Bustle — Sign Up For The Newsletter