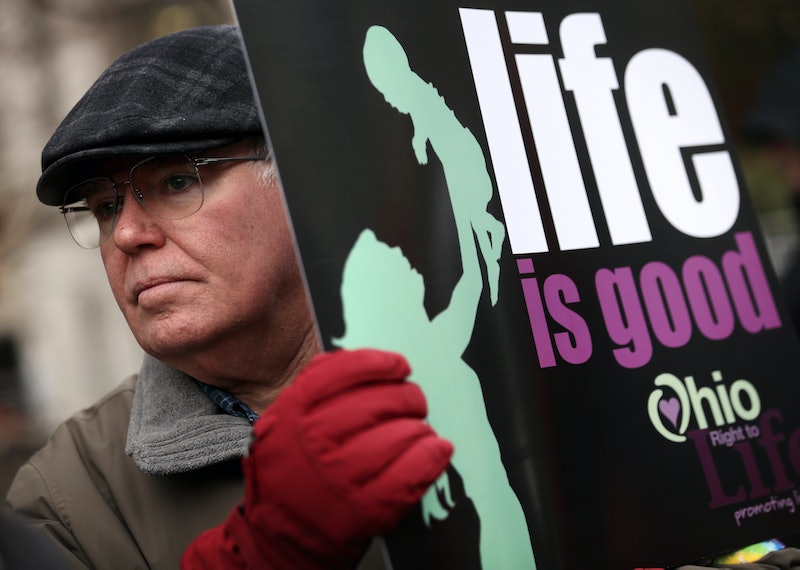 With the passage of its "Heartbeat Bill," Ohio is on the verge of enacting what would likely be the strictest abortion law in the country. Lawmakers in the state passed a bill earlier this week banning abortion from the moment a fetal heartbeat is detected — something that usually occurs as early as five or six weeks from conception. That's a time when many women are just discovering that they're pregnant. By dramatically shortening the timeframe women have to make decisions about their health, their bodies, and their future, the "Heartbeat Bill" is effectively a total ban on abortion.

The Ohio Senate passed the bill on Tuesday in a 21-10 vote. It had been approved by the House earlier, and is now awaiting a signature or veto from Gov. John Kasich. Although Kasich is a vocal pro-life advocate, he voiced concerns about the constitutionality of such a bill in 2014, and it is unclear if he will allow it to pass into law. Gov. Kasich has 10 days after receiving the bill to veto or sign it into law. Should the bill become law, it will be one of the nation's most restrictive laws on abortion, effectively banning the procedure before many women even realize they're pregnant.

Under the "Heartbeat Bill," doctors in Ohio who perform an abortion either without checking for a fetal heartbeat or despite having detected one could face up to one year in prison, according to the Columbus Dispatch. While the bill offers no exemptions for pregnancies that result from cases of rape or incest, it does allow for abortions in cases where the life of the mother is at risk.

Although similar bills were struck down in North Dakota and Arkansas for violating a woman's right to an abortion as outlined in the ruling of Roe v. Wade, lawmakers behind Ohio's "Heartbeat Bill" said they were encouraged by President-elect Donald Trump's promise to stack the Supreme Court with anti-abortion justices.

Ohio Senate President Keith Faber told WHIO-TV that the "new president" and "new Supreme Court justice appointees" had "changed the dynamic" and encouraged state lawmakers like himself, who had previously opposed a similar bill in 2014, to move forward with the "Heartbeat Bill." "I think it has a better chance than it did before," Faber said when asked if he thought the bill would hold up to legal challenges. "I think the issue is still one that's about tactics and strategy."

During his presidential campaign, Trump once suggested that women should suffer "some form of punishment" for having abortions should the procedure be made illegal. He later walked his statement back to say that doctors, not women, should be punished. Vice President-elect Mike Pence vowed that Trump's administration would overturn Roe v. Wade so the landmark ruling would be "consigned to the ash heap of history, where it belongs."

In a statement obtained by The Columbus Dispatch, NARAL Pro-Choice Ohio called the bill "unconstitutional," and warned it "would block access to safe and legal abortion before most women even know they're pregnant." In Roe v. Wade, the Supreme Court ruled women had the right to an abortion until "fetal viability," which typically occurs 24 to 38 weeks into a pregnancy.

Critics of the "Heartbeat Bill" say it seeks to make abortion illegal in Ohio by all but closing the window of time a woman has to make a decision. "At six weeks, most women don't even know they're pregnant," Planned Parenthood's Ohio chapter said in a statement. "This bill could take away a woman's right to make her own medical decisions before she would have known she had a decision to make." Iris Harvey, the president and CEO of Planned Parenthood Advocates of Ohio, called the bill "shameful" and "dangerous for women."

In a statement obtained by The Columbus Dispatch, NARAL Pro-Choice Ohio called the bill "unconstitutional," and warned it "would block access to safe and legal abortion before most women even know they're pregnant."

By instituting a roughly six-week ban on abortions, Ohio's "Heartbeat Bill" disproportionately affects women for whom pregnancy is unplanned and unexpected. For any woman not trying to get pregnant (and thus not regularly taking pregnancy tests), there are a few reasons a pregnancy might go undetected until six weeks from conception, including birth control use, regularly irregular cycles, and first-trimester bleeding. The bill makes no allowances for the wait times that often come along with appointment scheduling, and will likely force many women into making snap decisions regarding their health and future.