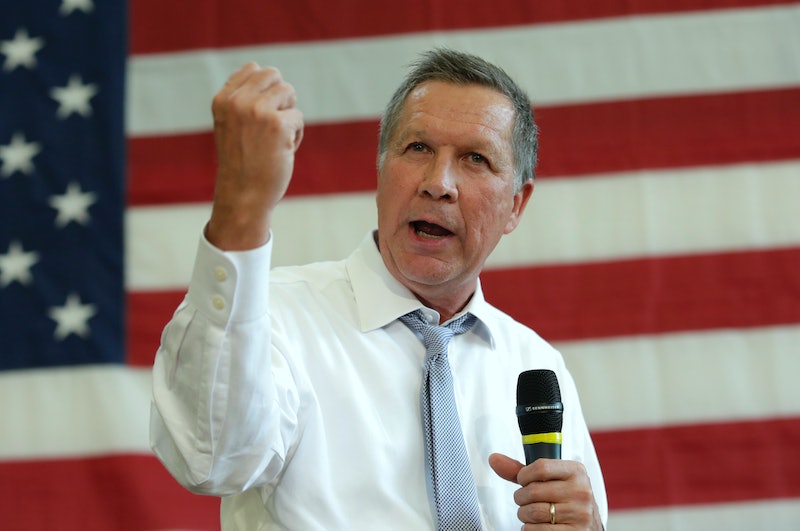 Even before President-elect Donald Trump's administration has been finalized, America is already seeing the effects of some of the thinking that got him elected in the first place. While there have been many anti-abortion bills forming in states the last few years, none compares in severity to Ohio's, which recently passed in the state Senate and House. The news of Ohio's "heartbeat bill" may seem depressing and overwhelming, but there's something you can do if you're feeling helpless. You can email or call Ohio Gov. John Kasich about the heartbeat bill to make your case as to why he should not sign it into law.

NARAL Pro-Choice Ohio released an easy-to-fill-out form to help citizens have their voices heard and prevent the extremely restrictive bill from moving forward. Kasich's options are to pass it, veto it, or use a line-item veto to take the abortion language out of the bill.

While any form of communication you can send to the governor is great, one former Congressional gave out some advice on Twitter that picking up the phone and calling is the most effective way to make elected leaders hear you. In a long Twitter chain, Emily Ellsworth said that while working with Congress, she rarely checked Twitter or Facebook comments, but was required to answer phone calls, and residents of their congressional district were able to get their opinions to Washington. Contacting a congressman is a little different than reaching out to a governor, but it's worth considering nonetheless if you feel called to action.

Although Kasich hasn't commented on whether he will sign the bill, he's suggested in the past that the nature of that type of legislation would be unconstitutional. While the bill would in fact likely be considered unconstitutional thanks to Roe v. Wade's commitment to allow abortion until fetal viability (around 24 weeks), it's still scary to think that elected representatives could go so far to limit women's reproductive rights. If this is any indication of what the next four years are going to be like, it's important that we stand up and fight to keep abortion legal, and to push further to make it more accessible.

Defeating the extremely restrictive anti-abortion law is really important right now for the future of reproductive rights, and especially for women who want to retain control over their bodies and their decisions on when, where, and how to become a mother. The Ohio heartbeat bill is a scary possibility, but if we raise up our opinions together, we can't be ignored.