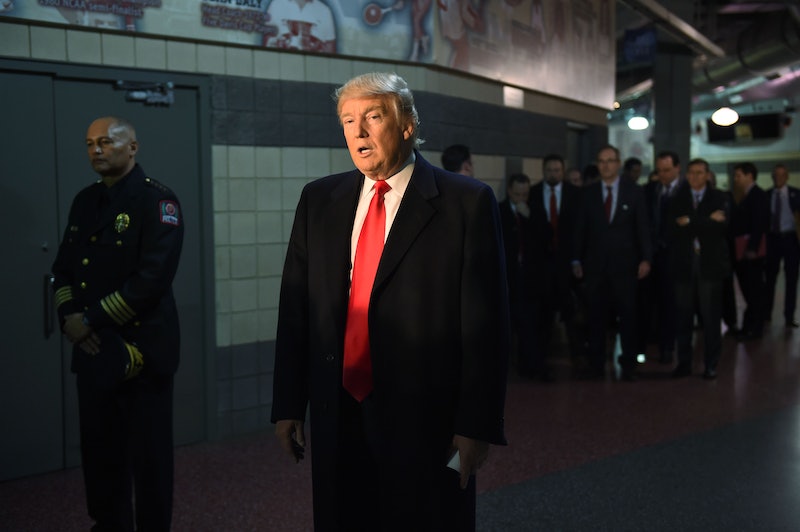 Donald Trump has come under fire for a variety of reasons since becoming the president-elect in early November. One of the major questions surrounding his term in office has been whether or not he’ll pull back from his vast global business. He’s promised to hold a press conference addressing the matter on Dec. 15, but has been vocal about handing the company reins to three of his children: Don Jr., Eric, and Ivanka. On Thursday, however, news emerged that Trump will reportedly remain an executive producer on Celebrity Apprentice, the reality TV series that helped make him a household name.

As of now, many details surrounding the deal are murky. MGM confirmed the news to Variety, but declined to disclose Trump's per-episode fee to the publication. They estimate it to be in the low five figures at minimum. According to Variety, NBC declined to comment. Arnold Schwarzenegger will be taking over the boardroom when Celebrity Apprentice returns, but it’s unclear how directly Trump will be involved with the production. Still, the announcement has already begun to stir up questions among the American populace. Having the president-elect on the payroll of a television show may present a big conflict of interest, and how it will affect his focus on the presidency remains to be seen. Hopefully Trump will provide more clarity before The New Celebrity Apprentice premieres on Jan. 2, but here’s what’s up for debate.

The presidential duties seem pretty time-consuming, so one would hope Trump’s focus will be squarely on running the country, right? So far, it seems like the EP title is mostly a figurehead deal, which apparently isn’t all that uncommon. As Entertainment Weekly notes, writer-producer Bryan Fuller departed CBS Access’ upcoming Star Trek: Discovery after writing the first two episodes, but he’ll retain his EP credit. If that’s the case with Trump, it should put American minds at least slightly more at ease.

Yep, you’re remembering that right. In July 2015, NBC officially cut ties with Trump after his comments compared Mexican immigrants to criminals and rapists. “Due to the recent derogatory statements by Donald Trump regarding immigrants, NBCUniversal is ending its business relationship with Mr. Trump,” the network wrote in a statement at the time. Variety reports Trump’s fees will be paid through MGM, the production entity on the show — not NBC. It’s unclear how involved they were in the decision, as NBC has yet to comment. As of Thursday, the network hasn’t posted the final credits for New Celebrity Apprentice.

Have Any Presidents Done This Before?

Trump has already been pressured about conflict of interest regarding his many ties to the worldwide business community, but apparently there is a precedent for presidents earning royalties while in office. As Variety notes, several former commanders in chief have written books during their time in the White House. President Obama published Of Thee I Sing: A Letter To My Daughters in 2010, but donated his proceeds to a charity supporting the children of disabled veterans.

Does This Change Trump’s Stance On Pulling Back From Business?

The press conference Trump is holding to discuss how he’ll balance his presidency with business isn’t happening until Dec. 15, so things are still very much up in the air. In November, Trump tweeted, “While I am not mandated to do this under the law, I feel it is visually important, as President, to in no way have a conflict of interest with my various businesses," and that "legal documents are being crafted which take me completely out of business operations."

He's said throughout his campaign that he’d turn over the Trump Organization to three of his children, but Don Jr., Eric, and Ivanka all remain close political advisers to the president-elect, so it's hard to see how the family business and presidential administration will remain entirely separate. Trump’s decision to stay on board as a Celebrity Apprentice EP seems to suggest he’ll maintain at least some outside profits, but that could be where he draws the line.

At this point, it’s hard to judge how entrenched Trump will be with his former empire. Legally, it appears that he has no obligation to step back, but he seems to view it as a symbolic gesture. We’ll have to wait until his press conference to get a sense for how things will truly play out.