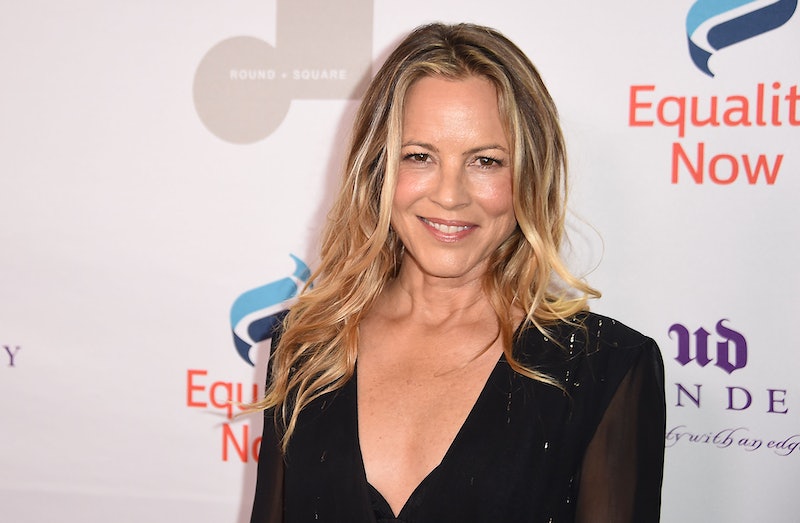 After over 25 years in show business, Maria Bello continues to pave a distinct path through Tinseltown — her own way. Between television and the big screen, the actor has an extremely impressive repertoire, as she's taken on more than 50 roles. That's 50 different women with their own history, genetic makeup, relationships, motivations, and personality. And it's safe to say that Bello is proud of nearly every woman she's portrayed. Unfortunately, I'm not sure all female actors can say the same thing. While approaching a very big birthday, Bello reflects on her career and all of the strong, fierce women she's had the privilege of playing thus far. And of course, she has intentions of keeping that legacy strong both in front of and behind the camera.

At Equality Now's "Make Equality Reality" event in Los Angeles this week, I ask Bello which of her many characters made her feel most empowered. She ponders for a moment, grows a smile and says, "I can’t really say." For a quick second, I think it's because she can't come up with one, which confuses me. I think about her plethora of badass roles and begin to question her hesitance. But soon enough, her answer validates my thoughts.

"Most of the roles that I play, I’m fortunate to say, they’ve been really strong, independent women characters," she says. And she doesn't take that lightly. "That’s thrilling to be able to say. Especially turning 50, continuing to get wonderful roles." It's true. Currently, she plays cutthroat attorney Michelle McBride in Amazon's Goliath. And her past roles don't go unrecognized. She's a tough, take-no-sh*t NYC bar owner in Coyote Ugly (2000), a strong, fervent mom in Prisoners (2013), a ruthless yet vulnerable mom in A History of Violence (2005), and a self-sacrificing mother in Lights Out (2016). And that's just a select few.

Bello's characters shed light on such a wide range of significant qualities and flaws in women, from passion to strength and sensitivity to stubbornness. Sadly, Hollywood has birthed so many negative female stereotypes, like homewrecker, ditz, and damsel in distress, but Bello dodges them as she continues to portray positive qualities on screen and allowing women to flourish off screen as well.

Female representation in Hollywood is something the actress is extremely passionate about, and something she spoke to when promoting Lights Out earlier this year. "50 percent of our audience [is] women and we don’t have more women behind and in front of the camera," she says. Currently, she's collaborating on a project with Viola Davis and her company, and working hard producing content with "strong, female-led characters."

And in real life, she's a tough cookie who embraces all of who she is as a woman — age and appearance included. "I think I work so much, so I look my age. That’s what people say," Bello says with a laugh. "Everyone gets all this stuff done." But going under the knife in attempts to mask her age isn't for her. "I feel relaxed."

(Almost) 50 has never looked so good.