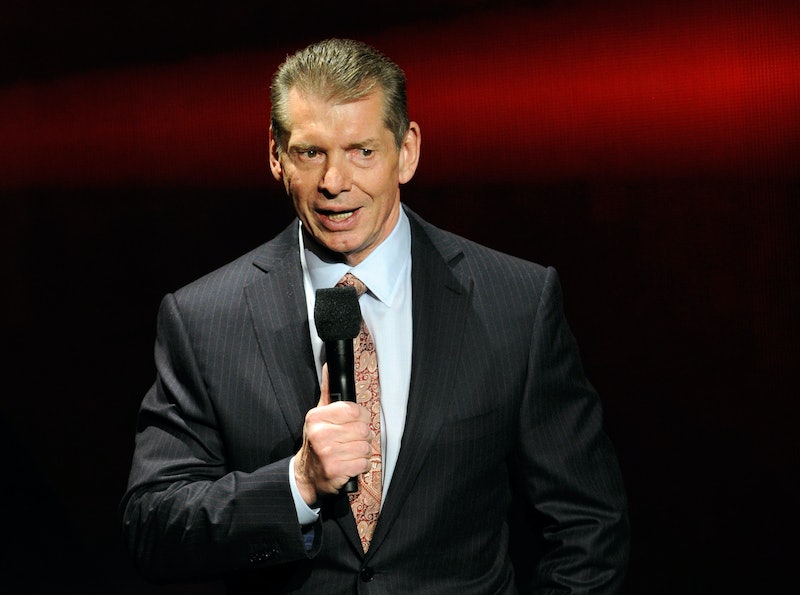 On Dec. 7, President-elect Donald Trump announced his choice to head the Small Business Administration: former World Wrestling Entertainment, Inc. CEO Linda McMahon. Linda and her husband have had ties to Trump for years. But who is Linda's famous spouse, Vince McMahon?

Vince is a billionaire wrestling promoter and the current chairman and CEO of WWE, Inc., which he took over from his father in 1982. In 1979, Vince and Linda founded Titan Sports, which would eventually be incorporated into the company that would become the WWE. The couple, who had been together since high school, worked as partners. “Vince and I, together, had the wonderful ability to grow many businesses,” Linda told Sports Illustrated. “We developed and grew a licensing business from scratch.”

Linda, who personally owns $84 million in WWE stock, according to Forbes, served as WWE's CEO from 1997 until 2009, when she left the company to begin a political career. She ran for Connecticut's Senate seat twice unsuccessfully, though she and Vince spent a reported $100 million on the campaign. But the couple was involved with Trump even before Linda pursued public office; between 2007 and 2009, Linda and Vince donated $5 million to the Donald J. Trump Foundation, which made them the foundation's biggest outside donors, according to Washington Post reporter David Fahrenthold. Linda also gave a total of $6 million to Trump's campaign, Forbes reported.

But Vince's most visible connection to Trump has little to do with campaign finance. The two actually had representatives face off in 2007 at Wrestlemania 23 in a "Battle of Billionaires" after Trump interrupted Vince's "Fan Appreciation Night" in typical Trump fashion. By that, I mean he dropped "tens of thousands of dollars" onto WWE fans in the arena, according to Trump's WWE bio. After McMahon's loss, Trump publicly shaved the WWE chairman's hair on camera and earned himself a spot in the WWE Hall of Fame. This wasn't the two billionaires' first meeting either; the McMahons had WWE Wrestlemania IV and Wrestlemania V tournaments held at the Atlantic City, New Jersey Trump Plaza during the late 1980s, Forbes reported.

It wouldn't be their last meeting either; Trump bought "Monday Night Raw" in 2009 and promptly declared that WWE fans who had purchased tickets would be refunded. This "nearly made Mr. McMahon's head explode and forced him to buy his show back from The Donald for twice the price," according to Trump's WWE bio. Obviously this staged rivalry didn't stop Vince from donating to Trump, nor did it stop Trump from appointing Linda to a cabinet position. We'll have to see whether Trump makes an appearance against Vince in the ring during his presidency, but rest assured Vince likely won't be leaving the pro-wrestling field anytime soon.