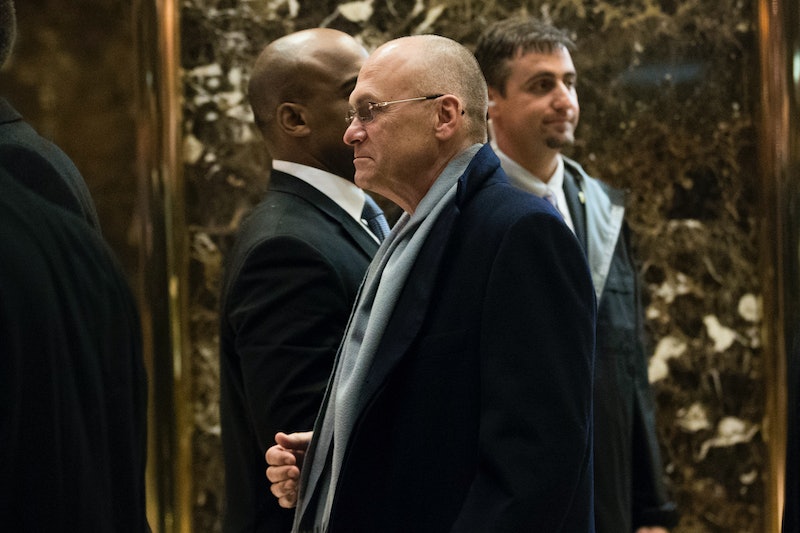 On Thursday, Donald Trump revealed that he’s tapped fast food tycoon Andy Puzder to serve as labor secretary in his administration. A longtime critic of President Obama, Puzder opposes expanding overtime pay, increasing the minimum wage to $15 per hour, and the Affordable Care Act. In addition, like much of the rest of Trump’s cabinet, he’s worth a whole hell of lot of money. Though Puzder’s net worth isn’t publicly available, the bits and pieces that have been reported suggest that he’s almost certainly a multi-millionaire.

There are some things we do know for sure. In 2009, Graphiq, a technology company that creates data-based infographics, pegged his income that year at $7 million and his “reported accumulated compensation” at $30 million. Then, in 2011, the Pacific Coast Business Times reported that Puzder pulled in $10 million that year. And in 2012, he made $4.85 million, according to his now-deleted profile at Forbes.

So, unless Puzder has made some truly catastrophic financial decisions over the last couple of years, it’s safe to say he’s probably worth a couple of million, and perhaps a lot more. On occasion, critics of the fast food CEO have cited his wealth in order to cast aspersions on his economic proposals; when someone casts doubt on a minimum wage increase, for instance, it’s a lot easier to view that position skeptically if the person espousing it is worth several million dollars.

Puzder is CEO of CKE Restaurants, the company that runs Carl’s Jr. and Hardee’s. He opposes Obama’s recent initiatives to expand eligibility for overtime pay and mandate paid sick leave for government workers, as well as mandatory 30-minute breaks for workers.

"Andy will fight to make American workers safer and more prosperous by enforcing fair occupational safety standards and ensuring workers receive the benefits they deserve, and he will save small businesses from the crushing burdens of unnecessary regulations that are stunting job growth and suppressing wages," Trump said of Puzder.

Insofar as his wealth goes, Puzder will be in good company in Trump’s cabinet. As of Wednesday — the day before Puzder’s appointment was announced — Trump’s cabinet members had a collective net worth of $14.5 billion — more than 30 times greater than the total worth of President George W. Bush’s cabinet, according to NBC News. That’s quite a wealthy administration, especially for a guy who once claimed that “I don’t get along very well with the rich.”

More like this
What Is Barack Obama’s Net Worth? He Makes *Way* More Now As An Ex-President
By Hugh McIntyre
How To Protect Your Digital Privacy If You Need An Abortion Post Roe v. Wade
By Kaitlyn Wylde
When Did Tamagotchi Come Out? In The U.S., 25 Years Ago
By Kaitlyn Wylde
Michigan’s Governor Is “Going To Fight Like Hell” To Protect Abortion Access
By Andrea Zelinski
Get Even More From Bustle — Sign Up For The Newsletter