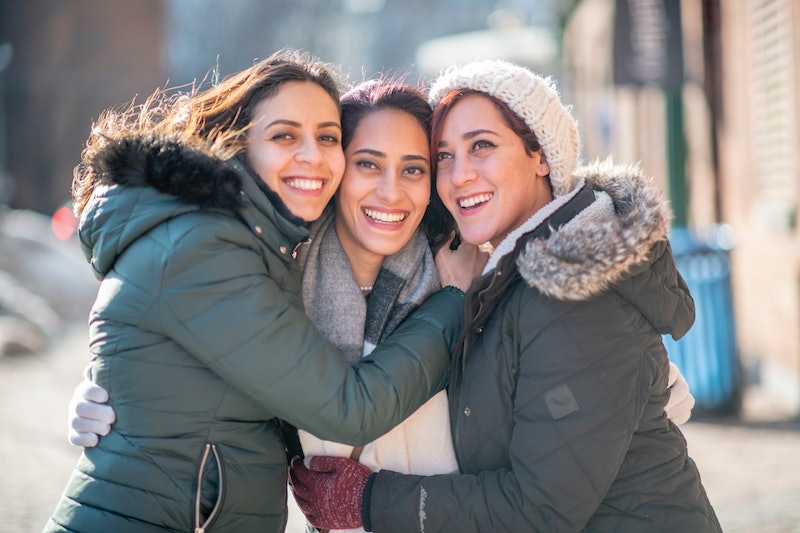 Have you ever wondered how much of your personality is genetic? It can be a sensitive topic; but a new meta-analysis of a bunch of genetic and personality data conducted by scientists at the University of San Diego and just published in Nature Genetics has uncovered some whopping new discoveries that might change the way you think about your tendency to talk a lot at parties or get moody at the drop of a hat. It seems that you may, genuinely, be able to blame a big portion of who you are on your genetics, and that some of those personality traits have a previously-unseen link to various psychological disorders.

The meta-analysis itself was whopping. It combined data from various organizations, including the now-famous genetic genotyping company 23andMe, to produce study pools that averaged between 123,132 and 260,861 participants. They're called "genome-wide association studies," where scientists scan the entire genomes of participants in all their glory to see if anything turns up as common between subjects with particular diseases, problems — or, in this case, personality traits or disorders. It's turned up genetic variants associated with all kinds of diseases, including some really interesting indicators for Alzheimer's disease. More of our health may be encoded in our genetics than we think.

But when the focus turned to personality traits, the San Diego scientists found some fascinating genetic indicators for things that may seem to be the business of therapists and online personality tests, rather than the nitty-gritty of chromosomes. Let's get into what they found.

When it came to personality, the researchers were using a model called the "big 5," which divides traits into five main categories: extraversion, neuroticism, openness, conscientiousness, and agreeableness. It's been a dominant theory since the 1950s, though it's got its critics, and it's the one that was used for the personality tests on people having their genomes sequenced. According to the data studied by the San Diego scientists, it seems that extroversion and the tendency to be neurotic are heavily genetically influenced, and they tracked down the specific areas where they turn up in the body's genome.

Extraversion, according to the "big 5" model, denotes people who are talkative, energetic, and assertive. And the San Diego scientists tracked it to variants in the gene WSCD2 and near gene PCDH15. Neuroticism, by contrast, is all about emotional shifts, moodiness, and anxiety, and it showed up in variants on chromosome 8p23.1 and gene L3MBTL2.

If you think these couldn't be more different, you're right; it seems that the extremes of personality may have a genetic basis, at least in some people, which may change the way in which we think about ourselves. But it's the next bit, the genetics of psychological issues, that begins to get really interesting.

Some Personality Traits Are Genetically Linked To Psychological Issues

The genetics of psychological disorders are still a major area of scientific inquiry. Stanford Medicine sums up the current lack of certainty in our knowledge of genetics in depression: "[The science] could mean that in most cases of depression, around 50% of the cause is genetic, and around 50% is unrelated to genes (psychological or physical factors). Or it could mean that in some cases, the tendency to become depressed is almost completely genetic, and in other cases it is not really genetic at all." In other words, we're still in our infancy when it comes to understanding it; and the new San Diego meta-study will add new potential to that pot of information.

They looked at six psychiatric disorders, and largely found that they weren't really related on a genetic variation level, with a few intriguing exceptions. For one, genetic variants tied to neuroticism and another one of the big 5, "openness to experience" (which concerns adventurousness and imagination), turn up in the same area of the chromosome as genetics associated with disorders.

That's not all, though. The scientists also found "high genetic correlations" between people who were extroverted and the incidence of ADHD. And the correlation also showed up between openness and schizophrenia and bipolar disorder. Neuroticism had a genetic link, too: to depression and anxiety. In other words, the fact that depressives may tend towards tension or moodiness and that ADHD sufferers also have a lot of assertive energy isn't a coincidence; it may actually be genetically related.

Why These New Findings Are Such A Big Deal

As Dr. Michael Kraus explained to Psychology Today, for years the search for a relationship between personality and specific genes has been a frustrating one. Genetic "matches" to particular personality traits didn't seem to hold up to future testing, and people were getting upset at the amount of money being used for matching studies when, Kraus suggested, it could be better used in other ways: looking more generally at how genes influence behavior, for instance, like examining the ways in which a particular gene might influence dopamine or serotonins and so make people more or less likely to act in certain ways. (Yes, your choices are in fact influenced by floods of chemicals being dumped in your brain. Romantic, isn't it.)

But this new insight is a big one, because it provides a large-scale look at some very promising links between precise genes in specific locations on chromosomes and real personality traits. While it's going to take a lot more work (and we're going to have to confirm the results, which, you must remember, has been the downfall of genetic-personality studies before), this could open the door to gene therapies for personality disorders and mental illnesses, genetic diagnostic tools, and a weird and wonderful world of personality-based genetic encoding. Possibly this may now be the new age of personality-shaping not through therapy or self-help, but through getting some genetic adjustments. It's all very sci-fi.

It's also cool (and possibly worrying) because of where they got the data. Besides 23andMe, their press release identifies data from The Genetics of Personality Consortium, UK BioBank, and deCODE Genetics, all companies focussed on the genetics of the public in some way or other. Our genetic sequencing is increasingly open for business for scientific researchers, and that concerns some onlookers. While studies like this are clearly just for the betterment of scientific knowledge overall, the notion of "genomic privacy" is gaining force. The National Human Genome Research Institute points out that "when conducting genomics research, two essential values of science research need to be balanced — the need to share data broadly to maximize its utility for ongoing scientific exploration, and the need to protect research participants' privacy. Achieving the right balance is particularly challenging for genomic data since each person's DNA sequence is unique (with the exception of identical twins) and a DNA sample therefore can never be made truly anonymised." It's a bit concerning for privacy worries.

While it may be tempting to blame your neurotic behavior on your genetics now, the scientists themselves urge caution when it comes to drawing big-picture conclusions from this first study. "Our study is in an early stage for genetic research in personality and many more genetic variants associated with personality traits are to be discovered," they noted. "We found genetic correlations between personality traits and psychiatric disorders, but specific variants underlying the correlations are unknown."

In other words, genes are incredibly complicated things, and this is the equivalent of discovering that two things are related on the surface without having an insight into any of the messy, complicated details underneath. At least not yet.