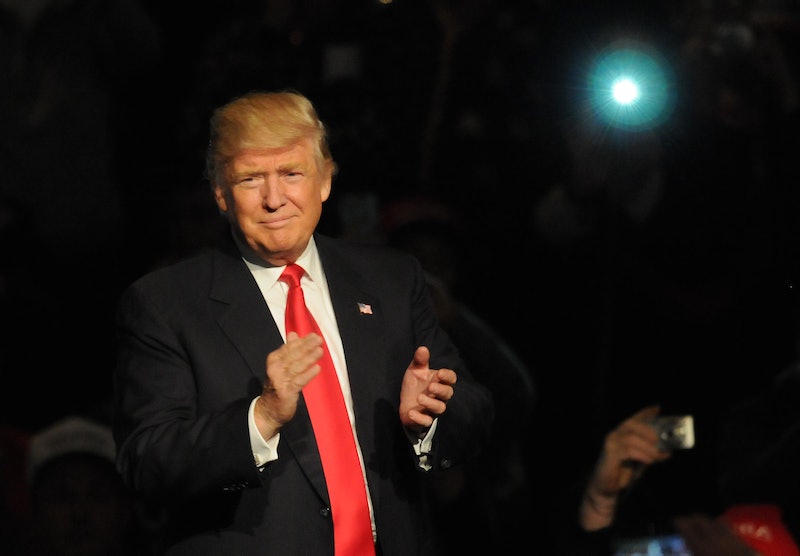 During the election, it often felt impossible to keep up with President-elect Trump's daily dose(s) of controversy. Headlines that seemed destined to down his presidential aspirations at 7 a.m. would be boring, "old news," by the following day, replaced by yet more scandalous revelations. The deluge of outrageous comments, predatory behavior, questionable business ties, cases of fraud... they were too much for any one person to synthesize and process. But thanks to Matt Ortega's new website, "corrupt.af," rotten behavior on the part of Trump as POTUS will be dutifully chronicled. (Bonus points to Ortega for the ballsy name.)

Oh yes, the "af" means what you think: "as f--k." (Though Ortega pulled off the URL by hosting his site from Afghanistan, whose country code is "af.") And even a cursory visit to corrupt.af shows that Trump is compromised in copious fashion. The latest post reveals that Trump will continue to receive a six-figure salary as executive producer on Celebrity Apprentice, and that he's plotting with the show's producer, Mark Burnett, to turn his inauguration ceremony into something more like helicopter-riding, action-hero-entrance theater. It seems Trump wants to treat assuming the most important job in the world as an opportunity to imagine he's Chuck Norris. What could possibly be wrong with this picture?

Scroll down on the site, and the picture of the next president's "ethics" grows laughably bleak. There is a title from the New York Times on Ivanka Trump joining her father in a meeting with the prime minister of Japan, never mind that she's simultaneously in business negotiations with a company owned by the Japanese government. It's not really customary for kids to join their president parent on official business. And by "not really customary," I mean "never does it happen." But it is especially unconscionable, considering the perception Japanese Prime Minister Abe Shinto may have had, that Ivanka's presence in the room with President-elect Trump signaled he would do well to look kindly on her Japanese business enterprise.

Or take the story of Bahrain renting space at Trump International Hotel, his new flagship property in Washington, D.C. As ethics lawyer Richard Painter pointed out for the Politico article, if a foreign government pays one of Trump's businesses while he is in office, that is an ethics violation, for obvious reasons. Now consider that Trump has properties all over the world, not to mention a good number of other business ventures. Even the best-intentioned and most upstanding person would struggle to disentangle themselves from unintentionally becoming compromised by business interests. And the descriptors "best-intentioned" and "most upstanding" are not often applied to Trump.

Corrupt.af has an infinite scrolling feature, and I confess that I hoped I'd reach "the bottom" of Trump's instances of corruption long before the page finally stopped refreshing. The fact that stories only date back one month adds another layer of dismay. But it's a reminder that corrupt.af and sites like it are enormously important. After all, the real world impact of a Trump presidency has only just begun.