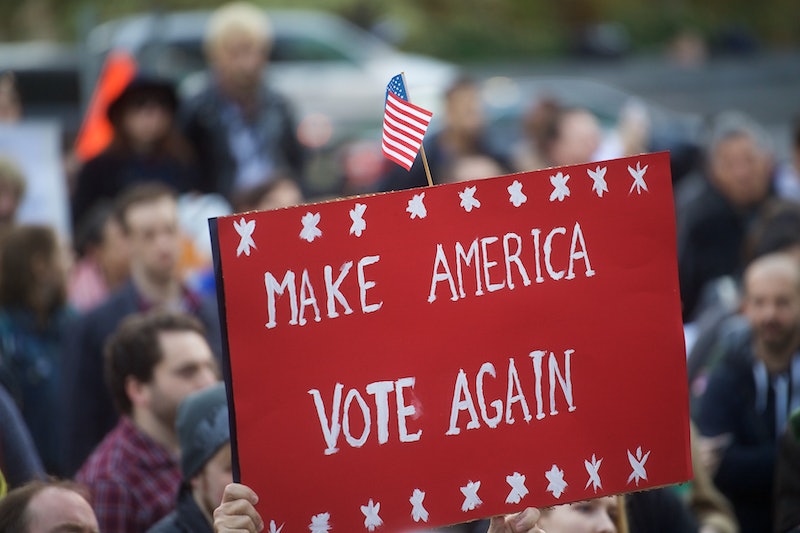 Once every four years, the Electoral College "meets" to cast their ballots and elect the next president of the United States. Ergo, President-elect Trump will not officially have won the White House prior to the Electoral College vote casting, which happens this year on Dec. 19. For a number of Americans, the individual state electors who comprise the Electoral College are now viewed as a potential last-ditch backstop to prevent Trump from becoming POTUS. And while there is not a national database of electors and their contact information, there are other ways for concerned citizens to get in touch with their state's electors.

One way is by perusing the list of electors put together by Politico. Since there are a grand total of 538 electors, those who wish to contact all of them will want to set aside serious time. And that's in part because, though Politico provides the names of each state elector, there is no accompanying contact information. For that, further detective work is needed. Take Florida, for instance, where the first alphabetical listing is a Republican by the name of Ade Aderibigbe. A google search reveals he's a party officer for the Republican Party of Florida, which gets me a Facebook follow icon. But that process took a minute or so, and I still don't have a phone number.

Americans concerned about the potential damage of a Trump presidency are contacting their electors, Democrat or Republican, and urging them to do whatever it takes to stop Trump. A group at the forefront of that effort is "The Hamilton Electors." Currently comprised of seven electors (all Democratic ones), they are hoping to persuade the necessary 37 Republican electors to defect from Trump by joining them in voting for a "suitable" Republican candidate. The most common name proffered is Ohio governor, John Kasich.

As of today, one Republican elector, Christopher Suprun, has publicly announced that he will not vote for Donald Trump. Suprun is asking his fellow Republican electors to do the same, though so far none have come forward to join him (at least, not publicly).

If Suprun and the "Hamilton Electors" are somehow able to persuade enough electors to drop Trump, and thereby deny him the necessary 270 Electoral College votes to win, the process will move to the House of Representatives. At that point, since Gov. Kasich (or whoever is decided upon as the non-Trump Republican option) will have earned at least some electoral votes, making him (or her) eligible to become president.

The probability of the Electoral College denying Trump the presidency is not high. But if electors were bombarded by nonstop phone calls and other forms of contact, that certainly wouldn't hurt the odds.