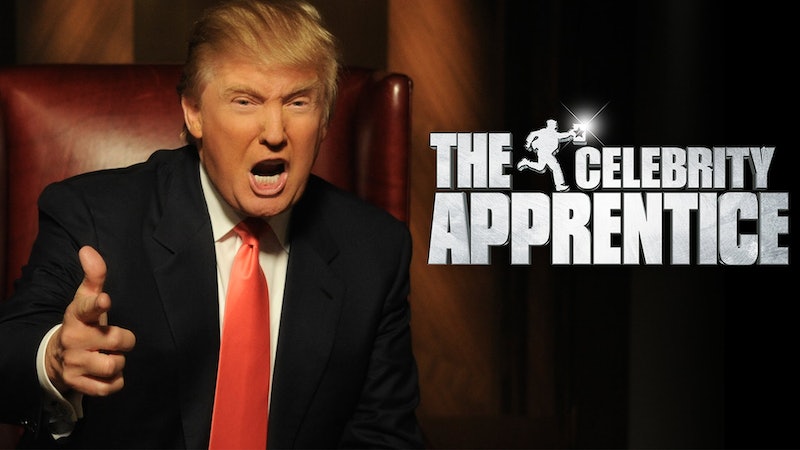 It's natural for presidential candidates to go back on some of their campaign promises. Really, it's naive to expect that any given candidate will do everything that they said they would when they were trying to compete for your vote. This year, though, the president-elect is taking that tendency to a new level. Donald Trump continuing to produce Celebrity Apprentice while in office is, on the one hand, just another broken promise. But when the promise he's breaking is to "focus on the presidency instead of [his] business," then, Houston, we have a problem.

Besides the myriad ethical concerns that come with Trump remaining tied up in his business (concerns that he neither seems to share nor, unfortunately, understand), there's another issue. You probably remember the moment in the campaign when he said that he would have his kids run his company, because nothing's more important than "making America great again." He's continued to claim that he won't have a part in the companies' business operations, although he has not yet divested completely and does not appear to be preparing to do so. The world is definitely still grappling with all that, though, and now his decision to stay involved with Celebrity Apprentice has thrown yet another wrench into the proceedings.

Kellyanne Conway, ever the one with the best mental gymnastics, has gone on the record saying that Trump continuing in this "hobby" is no different than Obama playing a lot of golf — something that plenty of Republicans made a big fuss out of. But at least in this case, the blatant hypocrisy is less important than the ethical concerns. If he stays on as an executive producer of the reality TV show, Trump will also continue to receive a salary from MGM — one that Conway claims there's at a least a chance that he won't keep, but a salary from a major entertainment company nonetheless.

It almost seems too obvious to even mention, but Obama was never paid by any of the golf courses he decided to play on. He was never obligated to play a certain amount of golf. Maybe he lost a tight game or two, but his golf games certainly never cut into his focus on the presidency the way an actual job producing an actual TV show would. Conway is trying to make these two things equivalent, but they're in no way equivalent.

Trump is breaking his promise to the American people, yet again. He seems to see the presidency as another new toy, one that can leave space for all of his other toys. That's not the case, and it's only a matter of time before he finds that out.