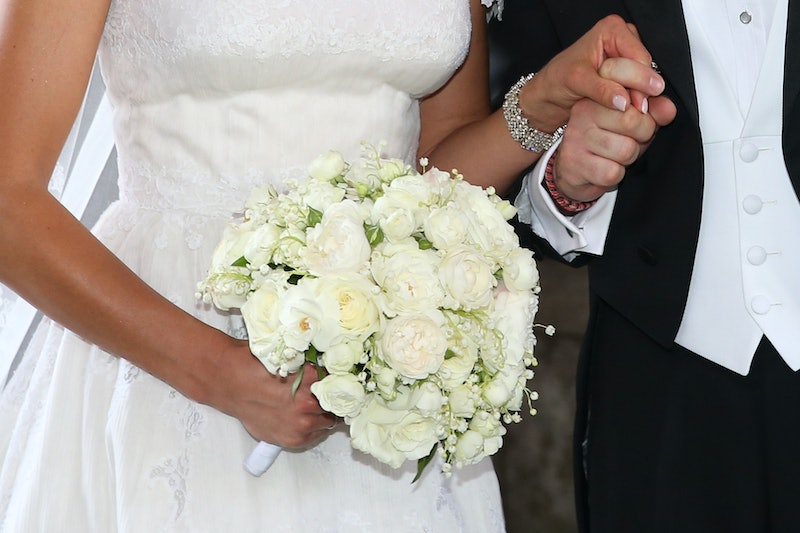 Sex and the City fans likely remember the scene in which Carrie finds the engagement ring Aidan’s secretly picked out for her and promptly throws up. It’s a sure sign to everyone watching that she just might not be ready to wed this guy.

Still, some of us would prefer not to rely on regurgitation to let us know when we shouldn’t put a ring on it. Here are 9 non-gastrointestinal red flags that suggest a relationship isn’t headed for a healthy marriage.

1. You have persistent doubts.

It might seem glaringly obvious, but you’d be surprised how often women ignore their gut feelings about a relationship. That’s unfortunate, given that our instincts are often spot-on. In fact, a recent study found that women who have doubts about getting married before the wedding are significantly more likely to be unhappy with their partnership several years later.

The study’s author cautioned that, if you do have doubts, it doesn’t mean you definitely shouldn’t get married. But it does mean you need to talk to your partner and express your fears and concerns.

2. You assume the relationship will improve.

It’s great to be hopeful — you can hope that, one day, you’ll win millions on your $5 scratch-off card. But when it comes to a relationship, it’s also important to be realistic. The same author who conducted the study above also found that newlywed women who are highly optimistic that their relationships will improve actually show the biggest decreases in marital satisfaction.

In other words, if there are problems in the partnership (she never really listens when you’re upset about work; he’s constantly jealous of your guy friends), they’re probably not going to disappear once you say, “I do,” and they might just get worse.

Wait, what?! Loving someone might seem like the very best of all reasons to get hitched, and the bond that keeps couples together when they hit a rough patch. But some experts say that the L word isn’t enough to sustain a long-term relationship. According to divorce expert Susan Pease Gadoua, L.C.S.W., it’s even more important to have mutual respect, similar goals, and compatibility. Those qualities, she writes, are far more lasting than love, which is often fleeting.

So if you’re marrying because you’re in the passionate throes of deep love — awesome. Just stop before you hit the altar and make sure the relationship also has those other characteristics to keep you together in sickness and in health.

4. You have different long-term goals.

You might both be on board with hopping a plane to the Caribbean for your honeymoon. When it comes to long-term plans, however, he or she might assume you two are buying a house in the country somewhere, while you can’t imagine leaving your career in the city. As Cosmopolitan’s relationship experts attest, it’s important to talk to each other before getting married about where you see yourselves geographically, careerwise, etc. in the far-away future. If you already disagree about where you’ll live or how you’ll balance work and family life, that rift might be a sign that marriage isn’t the healthiest next step for you two.

Most of us need a little financial help from time to time, especially at the beginning stages of our careers, and that’s OK. It just might not be an ideal time to get married. Psychotherapist Tina Tessina, Ph.D. tells iVillage readers that a guy who isn’t yet financially stable isn’t going to want to assume the responsibility of (at least partially) supporting a wife, and her insights apply to partners of any gender.

If your S.O. doesn’t have a solid plan for making rent for the next few years, that’s just going to cause problems in the relationship from the get-go. Wait a while until he or she is more financially independent — a.k.a. marriage material.

6. Your partner has a rocky past.

If your partner has a history of being a player, leaving a trail of short-lived flings and broken hearts behind him or her, you should definitely be wary of marrying the person. As marriage and family therapist Terri Orbuch, Ph.D. tells Cosmopolitan readers, “the best predictor of his [or her] future behavior is his [or her] past behavior.”

That’s not to say that your relationship can’t be genuinely different from all those failed partnerships. In order to find out if you’re headed for disaster, Orbuch advises asking your S.O. what parts of his or her past behavior he or she considers a violation of trust. The answer could determine whether you decide to stay or call it quits.

7. You’re afraid to be single.

Some of us think we’re going to end up as cat ladies; others fret about being alone on Valentine’s Day. Whatever your worry, don’t let it drive you to get married for the sake of being coupled. According to psychologist and relationship coach Linda Young, Ph.D., people who fear that they can’t be happy without a partner often end up making decisions out of “security-seeking” instead of a healthy ability to depend on other people.

The problem with that reasoning is that, if you aren’t happy on your own, there’s little chance that another person’s company is going to change you. Before you tie the knot, remember that the most important relationship in your life is your relationship with yourself.

8. You’re living together because it’s convenient.

Living together before marriage is a tricky topic — some people say it’s crucial, while others think it’s totally taboo. The really important question is why you’re cohabitating in the first place. Among people who shack up before they get married, two of the most common reasons are convenience (you sleep at her place every night anyway) and to spend more time together (aww).

But research suggests that couples who cohabitate out of convenience are more likely to be unhappy when they get married. That might be because they see marriage as an obligatory next step, instead of something they genuinely want. Have an open conversation with your S.O. and make absolutely sure you two aren’t marrying just to cut costs on the cable bill.

9. You want your dream wedding.

This Pinterest board says it all. Many women spend their entire lives fantasizing about the details of their perfect wedding — the sparkly Cinderella gown, the 10-tiered cake, the bouquets of lilies on every table (sigh). But I’m here to be the Debby Downer who tells you the wedding only lasts one night, while the marriage (supposedly) lasts ’til death do you part.

Be very honest with yourself and figure out if there’s even a little part of you that’s ignoring potential marital problems for the sake of being princess for a day. It’s nothing to be ashamed of, but it could cause some real regrets years later. Womp womp.