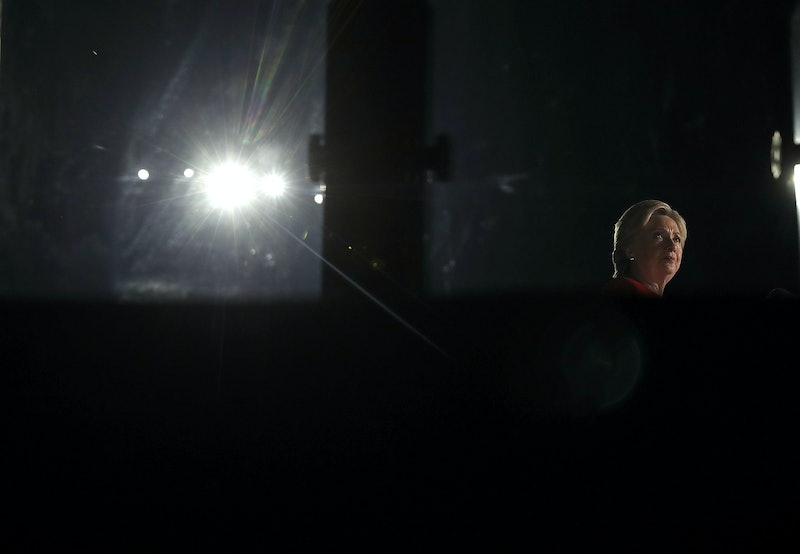 We’re nearing the end of the time where it’s reasonable to navel-gaze about what went wrong for Democrats and Hillary Clinton in the 2016 election. Fake news? Biased media? Sexism? Populism? Those emails?! The favorite latest refrain is, Why didn’t she go to Wisconsin? In a deeply-reported piece published in Politico about the crucial decisions that lead to Trump's victory, Glenn Thrush noted that Jake Sullivan, Clinton's policy director, kept saying to go Midwest and worried she would lose if she didn't.

Jake Sullivan... was the only one in Clinton’s inner circle who kept saying she would likely lose, despite the sanguine polling, according to his friends. He was also the only one of the dozen aides who dialed in for Clinton’s daily scheduling call who kept on asking if it wasn’t a good idea for her to spend more time in the Midwestern swing states in the closing days of the campaign.

His suggestion wasn’t rejected; it never got that far because nobody else on the call thought it was a good idea. They spent far more time debating whether or not Clinton should visit Texas and Arizona, two states they knew she had little chance of winning, in order to get good press.

But despite Sullivan’s accurate prognostication (that, apparently, fell on deaf ears), was Clinton’s Achilles heel the Midwest? If she’d only made a few trips to Wisconsin, would we be agonizing over her cabinet picks instead of enduring Trump’s?

In my heart of hearts, I really don't believe that a handful of rallies in the Badger State would have changed the outcome of the election. Unlike Al Gore’s razor-thin loss in Florida in 2000, where one flipped state would have swung the Electoral College, Clinton’s Electoral College tipping point was spread across three states. And, while her campaign can rightly be chastised for ignoring Wisconsin, the same can’t be said for Pennsylvania or Ohio, where Clinton and her surrogates campaigned vigorously. Winning Wisconsin would have been nice, but without Pennsylvania, it wouldn’t have meant much.

However, the point made by Thrush shouldn’t be ignored: the Clinton campaign did suffer from a self-assurance that was (clearly and painfully) misplaced.

Moreover, there’s a larger concept that’s harder to grapple with in understanding the outcome of the 2016 race: It was a super-close election, but it was simultaneously not really all that close. It’s only one of a series of contradictions of the Clinton campaign: their aversion to risk but inclination toward overconfidence; their “superior” ground game that ended up not being all that superior, not to mention their popular vote victory but Electoral College loss.

The reason to recognize this inherent contradictory nature of the election results — that it was close, but also not close at all — is to acknowledge the holistic nature of Clinton’s loss. It wasn’t a single or even a couple missteps but a cultural moment where a blowhard bigot promising the moon was able to triumph over a highly qualified, ambitious woman.

The responsibility to be borne by the Clinton campaign isn’t simply that it failed to send their candidate to Wisconsin, but that it wasn’t scared enough about the hoodwinking that Trump was performing. It’s probably worth wrestling with how motivation or lack thereof might have skewed pre-election polls: Someone asking you how you’re going to vote is different from whether you actually go to the polls and pull the lever.

Ultimately, I’d argue there was little that could have been done in the waning days of the campaign — other than some Hollywood-esque climactic moment of realness from Clinton, a Coach-Taylor style speech, which I tend to think she would have never done — that would have changed things. But I will tell you this: The 2020 Democratic candidate is going to be eating a lot of cheese curds.

More like this
Michigan’s Governor Is “Going To Fight Like Hell” To Protect Abortion Access
By Andrea Zelinski
10 Times Diana & Meghan Spoke Similarly On The Royal Family
By Sophie McEvoy
How The City Healed Five Years On From The Manchester Arena Attack
By Ella Glover
Yes, Billboard Queen Angelyne Really Ran For Governor Of California
By Brad Witter
Get Even More From Bustle — Sign Up For The Newsletter