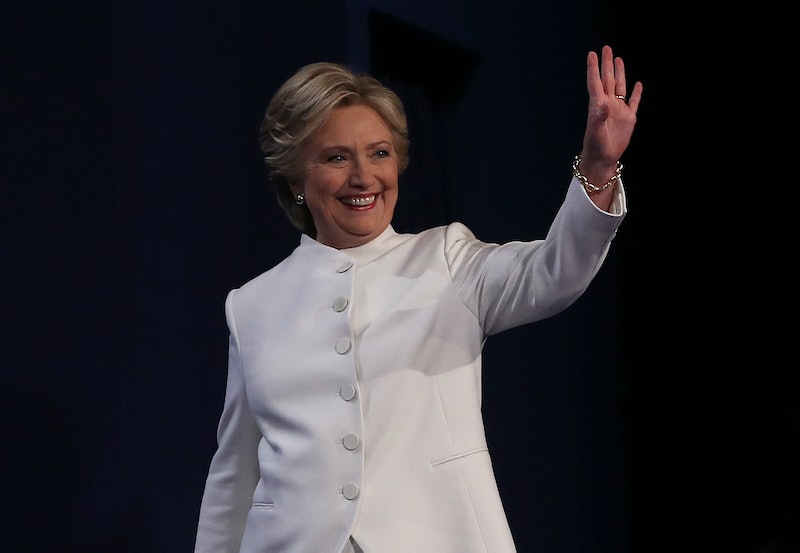 On Nov. 8, women wore pantsuits to the polls nationwide in honor of the reigning queen of pantsuits, Hillary Clinton. If you were one of them, you may be wondering what to do with your suit now in this post-election climate. You could keep it, obviously, but if the very sight takes you back to the disappointment of Election Day, the Pantsuit Nation pantsuit drive will take it off your hands and give it to someone in need. "The response has been super positive, and it's inspiring to see so many women (and men!) wanting to participate and spread the word," Meena Harris, entrepreneur and the Pantsuit Nation member organizing the drive, tells Bustle over email.

In case you missed it, Pantsuit Nation is a not-so-secret Facebook group for Clinton supporters. (By "not-so-secret," l mean that you need an invite to join, although it's been extensively covered by the media.) The group began as a way to get voters to wear a pantsuit on Election Day as a subtle nod to Clinton's uniform, but over time, it's blossomed into a movement big enough to warrant a nod in Clinton's concession speech. The nearly 4 million members are still active even now, a full month after the election; it now functions as a gathering place for feminists to talk about current events. (And maybe rhapsodize about Clinton.)

On Nov. 23, Harris announced that she would be collecting pantsuits for women in need. "If you wore a pantsuit on Election Day, or you have a new or gently used pantsuit at home that could be given to someone in need, please make a donation," she wrote in Lenny Letter. "These pantsuits will be given to organizations across the country that support poor and homeless women with job interview preparation and employment opportunities."

She went on to cite Clinton's work on behalf of women's rights, including equal pay, as inspiration for the drive. Most people are aware that white women make an average of 79 percent of what a white man makes doing the same work, but for women of color, that gap is often much larger. Black women make an average of 64 percent, and for Latinas, that drops to just 56 percent. For many women in poverty, the funds to purchase professional clothing simply aren't there.

"As I walked down the street in my affluent San Francisco neighborhood to drop off my dry-cleaning, I reflected on what an obvious privilege it is to even own a pantsuit, let alone to buy a new one for a special occasion," Harris wrote in Lenny Letter.

Harris tells Bustle that she initially plans on donating the pantsuits to nonprofit Dress for Success. When asked how many have been donated so far, she says she's still counting. "It's obviously a modest act of giving back, but people really want to find ways, both small and big, to stay engaged," she says.

Many Clinton supporters were disappointed by the results of this year's election, but Harris says it's important not to lose hope. "We may have lost an election, but we won't be defeated. There's so much at stake — and now so much in jeopardy — and we can't let up the fight," she writes. If you don't know where to begin, she has some suggestions: "Reach out to local groups and ask about how to get involved with local issues, support progressive candidates in the midterm elections, and please, RUN FOR OFFICE!"

To donate to the Pantsuit Nation drive, send your clothing to the following address.

More like this
Sandra Bullock, Girlboss Extraordinaire
By Matt Harkins & Viviana Olen
10 Times Boris Johnson Got It Wrong On Trans Rights
By El Hunt and Sam Ramsden
How To Protect Your Digital Privacy If You Need An Abortion Post Roe v. Wade
By Kaitlyn Wylde
How The City Healed Five Years On From The Manchester Arena Attack
By Ella Glover
Get Even More From Bustle — Sign Up For The Newsletter