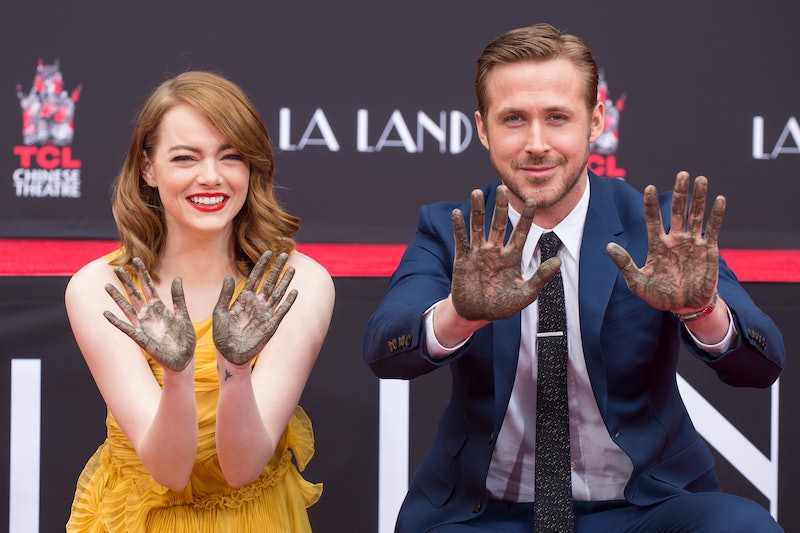 With the 2017 Golden Globe nominations announcement on Monday, Dec. 12, it will now be a race to see which actors (and which films and TV shows, of course) will be taking home golden statuettes in the new year. In fact, with so many incredible nominations, the only thing left for the general public to do is wait and see if their faves will come out on top once the 2017 Golden Globes air on Jan. 8. Well, to be fair, that's not entirely all that there is left to do — there is still the Golden Globe winners predictions list, so you can break out the popcorn and candy and wonder amongst your friends if your faves will go home with awards in 2017.

For movies, already a standout favorite in the Musical or Comedy category is La La Land, which has scored multiple nominations (Best Picture, Best Actor, Best Actress, Best Original Score, just to name a few...) With all of the Oscar buzz that Emma Stone has been getting for her portrayal in La La Land, she's for sure a favorite to win in the Best Actress - Musical or Comedy category. And with Natalie Portman's powerful portrayal of Jackie Kennedy in Jackie, she's also an early favorite to win the statue for Best Actress - Drama. Manchester by the Sea has also packed a punch this year, as well as This Is Us, The People vs. OJ Simpson: American Crime Story and black-ish in the television categories.

Read on to see the predicted winners for each Golden Globes category.

With five nominations and a ton of buzz since its November release, it looks like Manchester by the Sea is favorited to win the most coveted award of the entire night. However, the independent film Moonlight also scored six Golden Globe nominations — and it could be the indie movie that could.

It pretty much goes without saying that this one is a shoe-in for La La Land, which has been garnering an incredible amount of buzz for a Best Picture Academy Award. Meaning that it's relatively safe to say that at the Globes — with the Best Picture winner split up by genre — that La La Land will be going home with at least one big prize in January.

Natalie Portman is highly expected to take home the Golden Globe for her role as First Lady Jackie Kennedy in Jackie.

Even before the official nominations were out, Vanity Fair predicted that Casey Affleck will take home the top prize for Best Actor - Drama for his starring role in Manchester by the Sea.

Again, La La Land is supposed to come out on top here, with Emma Stone predicted to take home her first Golden Globe. However, she's also up against Meryl Streep (who scored a nod for her role in Florence Foster Jenkins), and everyone knows just how much award shows love Streep.

Like his La La Land co-star, Ryan Gosling is favorited to win for this one. But who knows — it could be the Battle of the Ryans, what with Ryan Reynolds perhaps surprising nom for Deadpool.

Here's to Viola Davis for Fences, though a Michelle Williams win wouldn't be a huge surprise.

With Moonlight receiving six nominations, it looks like Mahershala Ali could go home with the win for this one.

With every single show an incredible contender in this one — This Is Us, Stranger Things, The Crown, Game of Thrones, Westworld — it's anyone's game in this battle.

Mozart in the Jungle took home this prize last year, so it could easily win again, though awards-favorite Veep and Transparent are also strong contenders.

Both Vanity Fair and IndieWire are predicting that this one will go to Emmy-winner Rami Malek for Mr. Robot.

Between Evan Rachel Wood in Westworld, Claire Foy in The Crown, and Winona Ryder in Stranger Things, this one could be a toss-up.

Could Gael Garcia Bernal win this Golden Globe the second year in a row? Or could 2015 winner Jeffrey Tambor sweep in and score the win instead?

IndieWire is betting on Issa Rae for Insecure, but maybe — just maybe — Julia Louis-Dreyfus will finally score a Golden Globe for her role in Veep (after all, it's the fourth year in a row she's been nominated).

Best Actress in a Limited Series

Sarah Paulson is heavily favorited to win for her portrayal of Marcia Clark in The People vs. OJ Simpson: American Crime Story.

Best Actor in a Limited Series

Will Tom Hiddleston score a Golden Globe for his role in Night Manager? Critics are thinking this one belongs to Courtney B. Vance for his portrayal of Johnnie Cochran in The People vs. OJ Simpson.

With Chrissy Metz and Mandy Moore both being nominated for their roles in This Is Us, it looks like the Golden Globe for Best Supporting Actress has a strong chance of going to the NBC drama.

Though he didn't score a nomination for This Is Us, Sterling K. Brown did nab one for The People vs. OJ Simpson — where his biggest competitor is John Travolta, up for the same show.

As for which films, television shows, and actors will actually take home the golden statuettes, be sure to tune into the 2017 Golden Globes Jan. 8, 2017 on NBC.

More like this
What’s New On Netflix: A Victoria Justice Rom-Com & The Return Of David Letterman
By Arya Roshanian
What’s New On Netflix: 'Stranger Things' & 'Somebody Feed Phil' Return
By Arya Roshanian
Colin Firth Revealed His Favourite Mr. Darcy (& No, It's Not Himself)
By Sophie McEvoy
'Doctor Who’s New Star Is Already Huge On TikTok
By Maxine Harrison
Get Even More From Bustle — Sign Up For The Newsletter