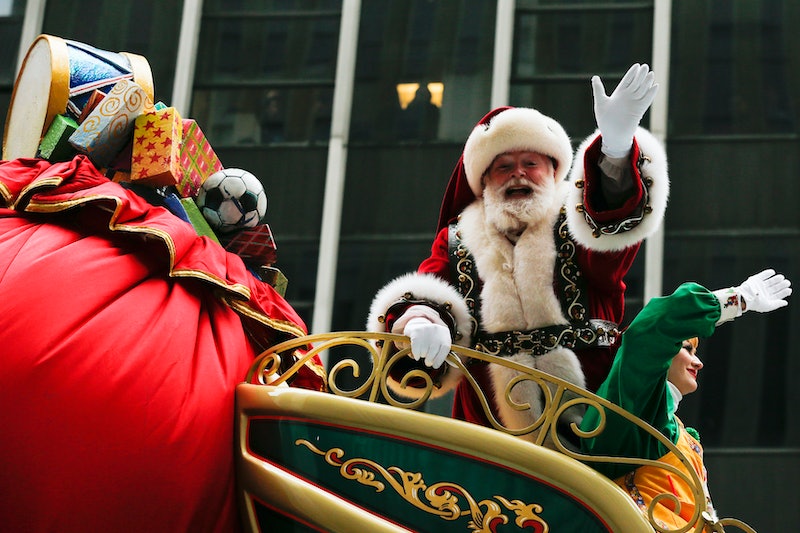 If you have ever harbored a desire to snoop in on Santa's progress Christmas Eve, thanks to technology — now you can! Google has brought Old Saint Nick into the digital age with the launch of its annual Santa tracking site. Wondering how to track Santa with Google in 2016? Joining the jolly old man on his epic journey has never been easier; all it takes is following a few simple steps (or clicks, as the case may be). With approximately 700 million children spread out over the planet's surface to visit, Santa certainly has his work cut out for him — and now you can have a front row seat to the magic.

The GPS Santa Tracker, created alongside the North American Aerospace Defense Command (NORAD), doesn't actually kick in until Christmas Eve, but Google's festive site offers activities to keep you occupied the entire month of December while you wait. Like a digital advent calendar, the site reveals a new feature each day in one of three categories: Play, Watch, and Learn. While exploring Santa's Village, children (and adults) can play holiday-themed games, learn about Christmas traditions from around the world, and even practice a few coding exercises. The educational tool even has a Christmas Eve countdown, so you will know exactly when Santa takes off. If Clement Clarke Moore's classic Christmas poem was written today, it might go a little something like this:

‘Twas the night before Christmas, when all through the house,

The children tracked Santa with their computer and mouse;

The stockings were hung by the chimney with care,

For according to the Google Tracker, he soon would be there.

Here's how to track Santa:

Currently, Santa is chilling in the North Pole monitoring the elves' progress on the gifts for all the good little girls and boys. You will have to wait until he starts his journey to finally track Santa around the globe. But as they say, "Good things come to those who wait." Hopefully, that means extra presents!

Once Christmas Eve has arrived...

When Christmas Eve finally rolls around, be sure to visit Google's Santa Tracker website to check out all the action. For those travelling, there is even an Android app version of the Santa Tracker for mobile devices so you don't have to miss a single move the jolly old elf makes!

Once you have logged on to the Santa Tracking site, click on the three lines in the upper left hand corner to reveal a drop down menu. There will be a few different options, including "Santa's Village," which is the homepage; "Season of Giving," where you can learn about different charities and organizations to support this holiday season; and "Track Santa" at the bottom.

4. Select "Track Santa" From The Menu

It's not available right now, but on Christmas Eve, the "Track Santa" option will finally be unlocked. Click on the image of Santa waving from his sleigh and explore "Santa's Dashboard" — the technology that powers his sleigh, with (you guessed it) Google Maps! As you follow Santa's journey around the world, you will be able to learn a little more about the many unique places he visits. So get those cookies and milk ready, because Santa Claus is coming to town!

More like this
Why Can’t I Go Live On Instagram?
By Emma Carey
Kris Jenner’s Advice For Kim Kardashian Is Going Viral On TikTok
By Courtney Young
How To Add Music To An Instagram Post
By Emma Carey
8 TikTok Pasta Recipes To Try Out At Home
By Emma Garza
Get Even More From Bustle — Sign Up For The Newsletter