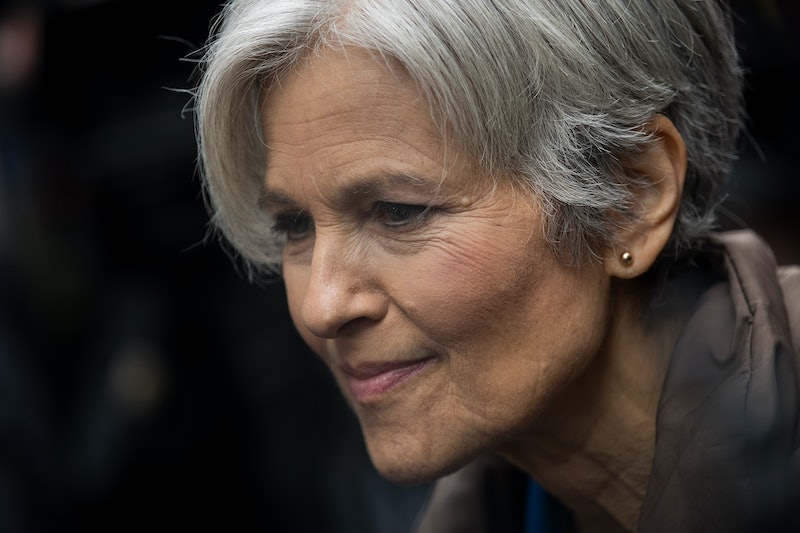 Sorry, progressives and ardent anti-Trumpers, but the dream is dead. First, Jill Stein's campaign withdrew its Pennsylvania court challenge to try to force a recount, citing high costs and promising to pursue a federal lawsuit. But now, with a Michigan court ruling against the recount, it's well and truly over — Donald Trump is the Electoral College winner, and barring a mass defection of electors on Dec. 19, he'll be the 45th president of the United States. So, as the recount efforts end, what will become of the money raised by the Stein campaign?

That all depends on how she and the Green Party ultimately decide to use the money, but if it's a question of whether there is a bunch of money left over, the answer is plainly yes. As the Detroit Free Press reports, Michigan will be refunding some of the money Stein put forward for the state's recount now that the effort has been quashed. This means she's due to receive a check in the hundreds of thousands of dollars, minus the cost of the recounts in the counties that took place prior to the halt — the full amount she handed over was $973,250.

In other words, there's going to be a big chunk of money left over. According to the website she set up to raise the funds in the first place — she brought in a whopping $7,300,000-plus to push for recounts in Wisconsin, Michigan, and Pennsylvania — any extra unspent money "will also go toward election integrity efforts and to promote voting system reform."

As it stands now, it's impossible to say how much money Stein might have left over once all the recount activities are done with, in large part because it's not completely over just yet, even though the halt to the Michigan process means they won't have any even theoretical chance of impacting the outcome of the general election.

But this much is clear: With more than $7 million raised, $3.5 million of that reportedly spent in Wisconsin, and the refund coming in Michigan, the recount campaign could still have a lot of money in reserve, barring a long and very costly federal suit over the Pennsylvania recount. Such a lawsuit would probably not be fruitful, given that nobody's been able to point to any concrete or actionable evidence of election fraud so far.

As for what "election integrity efforts" the extra money might be spent on, that's sort of up to her and her party to decide. For what it's worth, however, it's also possible that the amount of money left over at the end of all this will end up being relatively minor (in the grand scheme of things), and as CBS News reported last week, the Stein campaign has insisted that it doesn't plan on having oodles of cash left over at the end of this.

While a cynical observer could come away with a different impression, for the time being, especially with a decision on Stein's federal lawsuit over Pennsylvania reportedly just days away, this is still very much a wait-and-see situation.