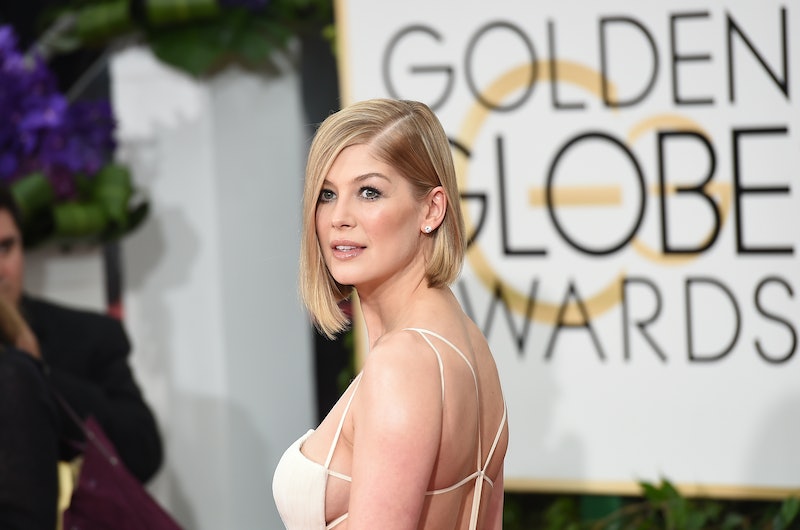 With 2017 approaching at an almost breakneck speed, we're now looking toward the upcoming awards season and speculating about which films, TV shows, performers, and creators will get nominated for the most revered trophies in entertainment. First up: the Golden Globe nominations happen on Dec. 12, kicking off the series of noms and awards ceremonies that are among the more widely televised in the entertainment industry. For the world of film, the Golden Globes serves as a barometer for whom will scoop up awards at the Oscars, so the laser focus on who will get nominated for a Golden Globe couldn't be sharper. In focusing on potential honorees, especially women, I think it's time to assess how the Golden Globes treats its female nominees . Do the Golden Globes give a fairer, wider scope of attention to potential female nominees than other awards shows, like the Oscars?

A big note right out of the gate: there is already an inequality between the opportunities given to men and those given to women in film and television. Gender inequality is a fact of life in the film industry and is being actively fought against in recent years, and gendered favoritism is indiscriminate in which group it touches — be it writers, actors, directors, or producers.

Yet the Golden Globes seem to be more favorable towards women than many other awards shows. Even when you factor in the gendered imbalance that is endemic to the film and TV industries, it's easy to see that there's more equal footing given to female nominees, regardless of age, race, experience, or level of industry visibility. That is to say, when considering the films and television shows that often get thrown into the conversation for the Golden Globes, the ceremony seems to favor a diverse and intriguing group of women.

For one thing, while the actors nominated at the 2015 and 2016 Golden Globes were overwhelmingly white (in 2015, Quvenzhané Wallis was the only woman of color to be nominated in Best Actress or Best Supporting Actress in either Drama or Comedy), there was a notable difference in ages among the women. At the younger end, there were Wallis and Jennifer Lawrence; at the older end of the spectrum, Meryl Streep, Lily Tomlin, and Helen Mirren. With ageism all too present in Hollywood, the Globes are taking an important step in the right direction by honoring women of all ages.

And the show is only moving the needle progressively forward. For the 2017 awards, possible Golden Globes nominees for Best Actress in a Drama are Amy Adams (Arrival), Taraji P. Henson (Hidden Figures), Isabelle Huppert (Elle), Ruth Negga (Loving), and Natalie Portman (Jackie). These women have consistently led the conversation in their respective category when it comes to diversity and inclusion, and some of their films, like Hidden Figures, are impressively progressive as well. Additionally, this group comprises two women of color (Negga and Henson) and a sizeable age gap (Negga, 34, as the youngest, Huppert, 63, as the oldest).

It is important to note the exciting range of women presented here. Despite their differences, all the women are connected by one thing: they have each earned high praise for their performances. Their recognition was earned by them, but the fact their work has been seen by so many to incur Golden Globes chatter is, I believe, a telling assessment of how the Golden Globes treats women.

It also helps that the body deciding who gets the awards is a more international and varied voting body: the Hollywood Foreign Press Association. As of 2015, the HFPA holds a readership of more than 250 million people internationally, with membership stretching to 55 countries across the globe. Members of the HFPA attend both U.S. film festivals as well as international film festivals, which leads to a widened exposure to projects across the board. Members of the HFPA interact with over 400 actors, writers, directors, and producers over the course of the year and interview from and report from an estimated 300-plus film sets. This wide net of exposure on both sides means that the HFPA's awareness of a more diverse body of contenders can greatly affect who gets nominated and can ultimately win a Golden Globe.

As with all awards ceremonies, the Globes may give its voting body greater access to films and television programs nationally and internationally, but those projects up for awards at the end of the industry year potentially act as report card of how film and television approached women during the previous year. To green-light a female-centric biopic like Jackie or a film that focuses on women of color like Hidden Figures is a vote of confidence from a studio that it is a story worth telling. Those films get the opportunities to gain critical praise and momentum, putting them into awards season conversations.

In entertainment, you cannot get recognized if you're not given a platform to speak. While the Golden Globes certainly give greater care and attention to women in comparison to other awards shows, perhaps the only way for all awards shows to treat women better is to work from the beginning and truly level the playing field between men and women, especially when it comes which films and television shows get made.