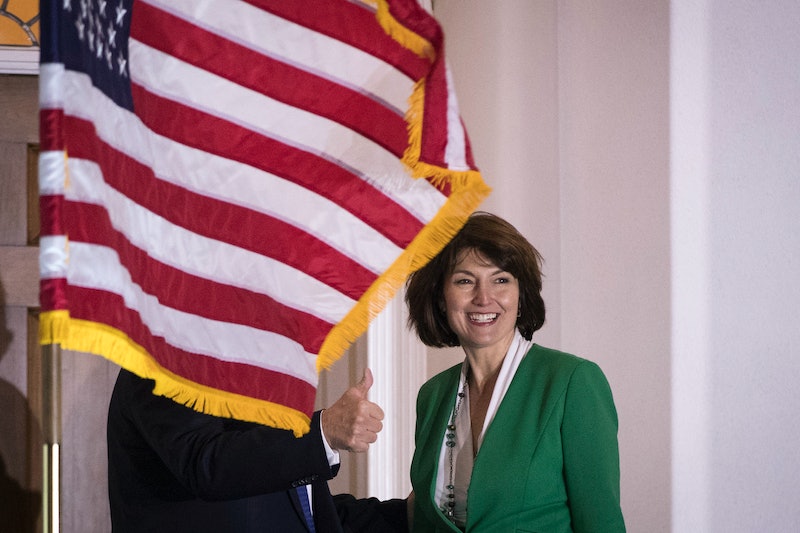 Donald Trump will name Rep. Cathy McMorris Rodgers as secretary of the interior, the Hill reported Friday. A Republican congresswoman from Washington state, McMorris Rodgers has been in politics for over 20 years, joining the Washington House of Representatives in 1994 and winning election to the U.S. House 10 years later. Long considered a rising star in the Republican Party, McMorris Rodgers is a staunch opponent of abortion rights, protections for LGBT people, and environmental protections. She will be right at home in Trump's cabinet.

As chair of the House Republican conference, McMorris Rodgers is the highest-ranking female Republican in the House of Representatives. In 2014, she delivered the Republican Party's response to President Obama's State of the Union address, and was reportedly under consideration to be Mitt Romney's running mate in 2012. She's also vice chair of Trump's transition team, so her appointment isn't a complete surprise.

Her affable demeanor notwithstanding, McMorris Rodgers has extremely conservative positions on several key issues, and is strong opponent of equal rights for LGBT Americans. In 2007, she voted against a bill that would prohibit employers from discriminating based on sexual orientation. Two years later, she voted against expanding hate crimes protections to include LGBT Americans (and, incidentally, those with disabilities).

McMorris Rodgers vehemently opposes just about every manner of environmental protection, as evidenced by the 4 percent lifetime rating she's received from the League of Conservation Voters. She's voted to ban the Environmental Protection Agency from regulating greenhouse gases and to exempt greenhouse gases from the Clean Air Act's requirements; likewise, she opposes tax credits for renewable energy facilities but wants to retain federal subsidies for oil and gas companies.

Lastly, like most Republicans, McMorris Rodgers opposes abortion rights. In addition to co-sponsoring the Right to Life Act, which would define fetuses as human beings and grant them 14th Amendment protections, she's voted to defund Planned Parenthood and make it illegal to transport minors over state lines for the purposes of having an abortion.

McMorris Rodgers is sometimes praised for her folksy and warm persona, but don't let that fool you. She's just as much of an extremist as anybody else in Trump's cabinet, and it makes perfect sense that he wants her to run an agency in his administration.