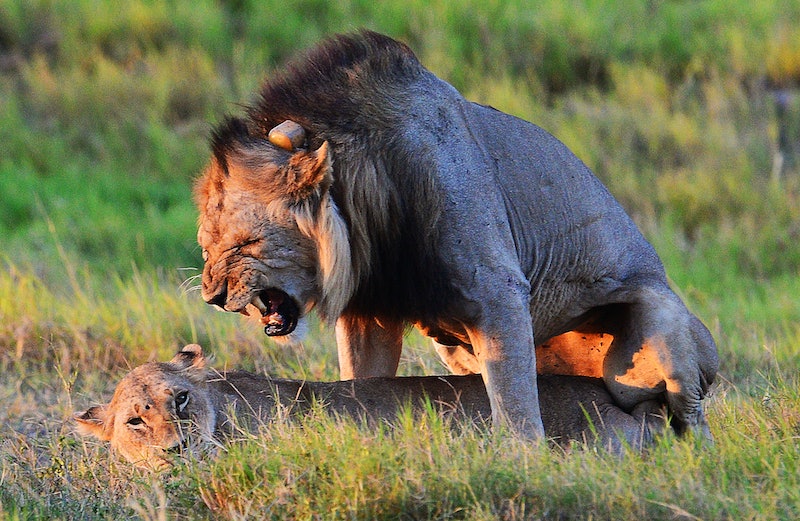 This list was not easy to narrow down; the animal kingdom is full of kooky sex animals. But I firmly believe that the following seven species have the weirdest sex lives. Find out why below. (You're welcome.)

There seems to be something about Australia that inspires species to adopt absurd sexual habits. The brownish-grey male great bowerbirds are masterful builders, and they use that to their sexual advantage. To attract the ladies, they spend months building elaborate bower structures, consisting of a thatched,twig tunnel that stretches about two feet long. The tunnel opens out onto a sexy and colorful patch of bones, shells, rocks, and other objects. The female bowerbird goes through the tunnel, and the male is waiting on the other end, proudly showing off his collection of random things. The goal of the bower (and the court where he waits for the female) is to create an allusion that he is far larger than he actually is — a phenomenon referred to as the Ebbingaus illusion. (As you'll notice in the video above, the male makes strange noises all the while.)

Female spotted hyenas run the show. Unlike most mammalian species, they are far more dominant, muscular, and aggressive than their male counterparts. This is because they're full of androgen, a male sex hormone linked to aggression, which causes their sex organs to grow. A lot. A female hyena clitoris can protrude seven inches from her body (the verdict is still out on whether it increases female pleasure) and it contains the birthing canal. This can complicate sex for the animals — the male must crouch behind her and devise a way to insert his penis backwards into her clitoris.

It's probably safe to say that bonobos are the most sex-crazed mammals of all time. For bonobos, sex is not only highly pleasurable, it is also an important social tool: it reaffirms communal bonds, resolves conflict, relieves tension, and just generally keeps the peace. Males with females, females with females, males with males, mothers with sons: just about any combination you can imagine, the bonobos are about it. They are also highly creative when it comes to the act itself. In the 2013 March issue of National Geographic, biologist Frans de Waal noted, "Whereas the chimpanzee shows little variation in the sexual act, bonobos behave as if they have read the Kama Sutra, performing every position and variation one can imagine." Aside from all the incest, I feel like humans could learn a lot from these sexually liberated creatures.

These old-fashioned man bugs are still very adamant about romancing a lady before initiating sex. To seal the deal, a hangingfly will offer a prospective mate a dead insect that the recently killed. If she decides that the gift looks like a suitable meal, she'll have sex with him. If not, she'll find her loving elsewhere. Wait, it gets even more romantic. The hangingfly's adorable cousin, the balloonfly, makes sure to gift wrap his prey in a (non-edible) silk balloon-like structure. So sweet.

Drama. Jealousy. Penis Chewing...Banana slug sex has all the intrigue of a soap opera. These shell-less mollusks, which can grow up to ten inches, are hermaphrodites, meaning they have both male and female reproductive organs. To mate successfully, a banana slug must choose a mate that is similarly sized; if his partner is too big, its likely his penis will get stuck during sex. As if that weren't awkward enough, the partner has to bite off the banana slug's penis, so they can separate, in a magical process known as apophallation. Other scientists suggest that the penis-biting-off process is a means of ensuring your mate doesn't go off to fornicate with another slug. Whatever the reason, it's a delightful ritual.

These bio-luminescent cephalopods engage in some pretty peculiar foreplay. The male will use his sharp beak to jab holes, up to two inches in depth, into his mate's body. Then, he inserts his penis-like appendage into the holes, where he deposits the sperm. (The Dana octopus' bio-luminescence is believed to play a role in the courtship; the lights flash during their gruesome foreplay.) The greater hooked squids, relatives of the Dana octopus, have streamlined the whole process. Their sperm is comprised of special enzymes that dissolve flesh, allowing it to bury into the female's skin, which eliminates the need for the preliminary incision process.