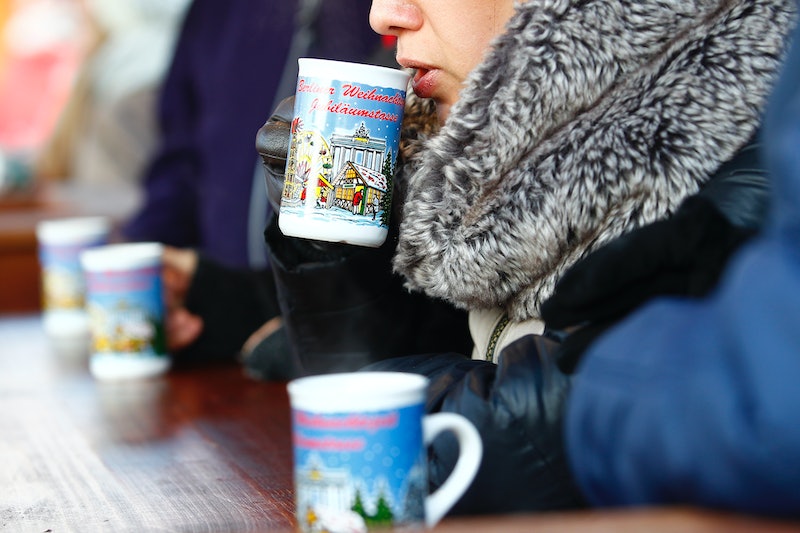 Holiday parties are gearing up, and that means one thing: holiday drinks. Well, that and ugly Christmas sweaters, but let's focus on the drinks. Probably the most ubiquitous of all wintertime holiday beverages is eggnog — that yummy mixture of eggs, milk, cream, sugar, alcohol, nutmeg, cinnamon, and holiday cheer. Eggnog is typically a seasonal beverage — I can't imagine drinking it in the summer would be a good choice — so the urge to hoard it when it's available can be strong. But that's not exactly a good idea because eggnog doesn't last forever, so here's how to tell if eggnog has gone bad.

For the record, commercial eggnog has an estimated shelf life of three to five days. When you make your own eggnog, it gets a little trickier: Cream can last anywhere from one to three weeks after its "best by" date; milk can last for up to a week after its expiration date; but eggs out of the shell can only last two to four days. So what to do? Well, Eat By Date says that homemade eggnog only lasts two to three days in the refrigerator, which kind of makes sense. When it comes to food safety, it's probably best to go with the soonest expiration date, rather than the latest.

So how can you tell if your eggnog has gone bad? Aside from checking the expiration date, there are a few simple ways to tell.

Look With Your Special Eyes

Not surprisingly given that it's got a lot of dairy in it, when eggnog turns sour, you should be able to tell by looking at it. Ehow says bad eggnog will become lumpy. You may also notice mold growing in it. Yuck! But the first line of defense is to check out its color. Regular eggnog is beige to yellowish in color — if yours doesn't look like that, it may be spoiled.

Do A Sniff Test

If you've visually examined your eggnog and you're just not sure whether or not it's still good to drink, it may be time for a sniff test. We've all probably smelled spoiled milk before — if your eggnog smells like that, it's no bueno. A sour aroma is a sign that the lactic acid bacteria in the milk and cream have spoiled. Trust your nose; if it smells like spoiled milk, it probably is.

Basically, while making eggnog might be a bit of a complicated process, knowing if it is and isn't still safe to drink is pretty simple. And if you're on the fence, it's probably best not to chance it. After all, drinking expired milk and eggs puts you at risk of developing food poisoning — not the best way to start off the holiday season.

So drink up while you can. Cheers!