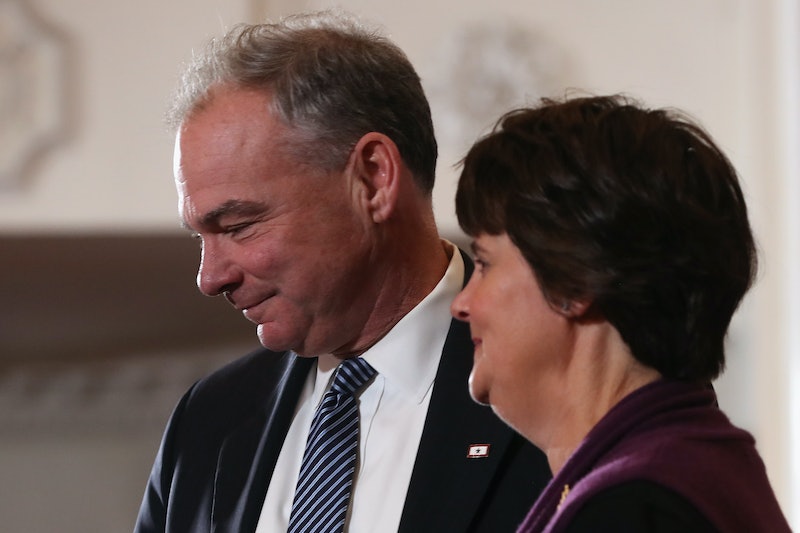 The Electoral College is scheduled to vote on Dec. 19, with a full 538 electors across America making their choices for president of the United States. Republican nominee Donald Trump prevailed on the Electoral College map, making him (by all historical precedents) the president-elect. And yet, seeing as the electors can technically vote how they want, despite laws in some states that punish such behavior, and seeing as Trump lost the popular vote by millions, some are wondering about a compromise — could the 12th Amendment make Tim Kaine Vice President instead of Mike Pence, for example?

The answer is yes, although in practice it'd be sure to cause a huge amount of uproar.

The 12th Amendment stipulates that electors cast distinct, separate votes for president and vice president, which means that they have the chance, albeit one without any historical precedent, to choose Trump for the top job, and yet to force Kaine on him as his number two. That would require at least 37 electors flipping their vice presidential votes from Pence to Kaine, however, which would be an event with no historical precedent. In fact, were that to happen, it would almost surely mean that the electors had broken away from Trump himself, as well. But if you're simply asking whether it could happen, that's a yes.

In the event that the electors voted in such a way as to deprive both Trump and Pence of the 270 electoral votes they need, but also didn't allow the Clinton-Kaine ticket to ascend — by voting for a third option like conservative independent candidate Evan McMullin, as just one hypothetical example — things would get far more complicated. In short, if neither ticket crosses 270, then the election gets kicked to the House and Senate to decide. To be specific, the House picks the president, while the Senate picks the vice president.

And it's a guarantee that the GOP will control the Senate come Dec. 19 and going forward until at least the 2018 midterm elections. In other words, it's effectively impossible to conceive of Kaine prevailing in such a contest — it's one vote per senator, and Pence (himself a former representative) is very well-liked among the Republican establishment in Congress. In other words, this is a scenario you can safely tuck away into the recesses of your mind, never to be dwelt upon again. Because while it is technically possible for Kaine to be named vice president instead of Pence, it's an unlikely as any potential Electoral College development out there right now.