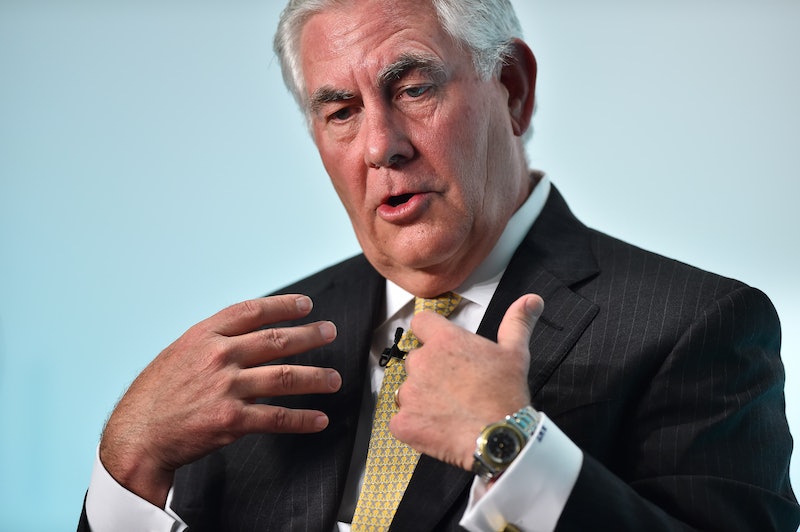 After weeks upon weeks of consideration, according to a report from NBC News, President-elect Donald Trump will choose Rex Tillerson for Secretary of State. It's a name that wasn't exactly floating in the political winds in the immediate aftermath of Trump's victory ― other possible choices, like longtime Trump loyalist Rudy Giuliani and occasional Trump antagonist Mitt Romney, generated a lot more attention over the past month. And yet, according to recent reporting, it's looking like the 64-year-old Tillerson will be the one taking the job as America's top diplomat, despite having no governmental or diplomatic experience whatsoever.

That's not to say Tillerson isn't experienced at interacting with foreign heads-of-state, however ― he's a big-time oil executive, and that's putting it mildly. In fact, Tillerson is currently the chairman and CEO of Exxon-Mobil, a multinational oil giant currently ranked as one of the most profitable companies in the world. And in that capacity, he's struck deals with foreign leaders before, although whether you find that reassuring or concerning is up to you ― notably, he's had a working relationship with Russian president Vladimir Putin.

Tillerson's ties to Putin are likely to stoke controversy, given the already heightened scrutiny of the incoming Trump administration's relationship to the Russian government, and recent anonymous CIA allegations of Russian interference in the 2016 presidential race, explicitly to benefit Trump. The Trump transition's communications director Jason Miller did not confirm the Tillerson pick after NBC News' report broke, insisting that there would be "no announcements on Secretary of State until next week at the earliest."

As far as his business career is concerned, Tillerson is basically an Exxon lifer. According to the career rundown posted on Exxon-Mobil's official website joined the company as a production engineer in 1975, and ascended through the company's corporate ladder to ultimately be named chairman and CEO in 2006. Notably, in 2013, Tillerson was bestowed the Russian "Order of Friendship" from Putin.

To be clear, this pick has not been officially announced by the Trump transition, and there is always the chance, however remote, that something will change between now and when the official announcement is made. Especially considering Tillerson's ties to Russia, which could present problems in a Senate confirmation ― Arizona senator John McCain has already indicated that he has "concerns" about a Tillerson appointment, and this kind of preemptive press speculation could help the Trump team gauge what it's best course of action is going forward. As The New York Times points out, Trump is not averse to last-minute changes of direction, and his spokesperson Miller also declined to comment.

If Tillerson does indeed get the nod, however, it'll be a historic pick for his lack of relevant experience ― he has never once worked in government, nor diplomacy, nor does he have any military experience. And in that regard, he's cut from the same cloth as Trump himself.