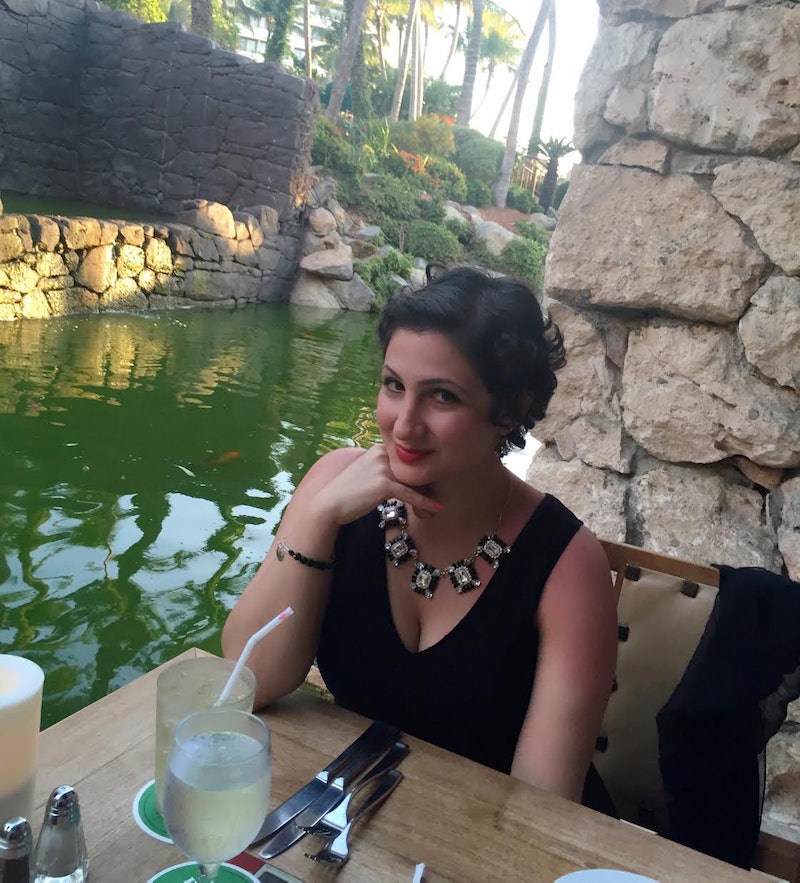 After a meal at a new downtown hot spot, my fiancé and I were led to a secret, speakeasy-style back room, where we ordered coffee and dessert. Two concoctions soon arrived in shot glasses, topped with whipped cream. “It’s cold-brew coffee with syrup” said the Barista-Slash-Bartender (BSB).

I took a confident sip — at the beginning of the meal, when he brought us shots and began explaining what was in them, I took the opportunity to politely explain that I can't drink before he even set them down—and immediately spit it out.

It was almost too late—almost. I felt the familiar burn in my throat, the warmth spreading through my chest. I rinsed my mouth out with water, discretely spitting that out, too.

My fiancé took a sip. “Definitely alcohol in here,” he said.

The BSB stared on in horror, then cleared his throat, going on to tell me that it was just coffee, repeating the brand by name, the length of time it was brewed, and the type of syrup he used.

I smiled. “Maybe there was a mistake, but this isn’t just coffee."

The sober community runs on coffee. Lots of coffee. We know coffee.

Fortunately, this is not an incredibly common occurrence.

The last time this happened was two years ago at a four-star restaurant off of Central Park, when I had to fill my Egyptian-cotton napkin with the liquored granita they'd intended as a "palate-cleanser" before the final course. I had declined alcohol and wine literally five times before they brought it out to me. Though I'm rarely forced to spit something out, life as a restaurant reviewer and digital scribe of all things food means that people are constantly trying to serve me alcohol.

In case you aren't familiar, folks in 12-step programs introduce themselves as “alcoholic” before they speak at a meeting as a "reminder" of what we are capable of — that we cannot drink normally, no matter how much progress we make.

For years, I got a kick out of hearing my dad, who hasn’t had a drink since I was a baby, tell waiters, “One more iced tea, but that’s it, because I’m driving.” Today, it's a line I still sometimes use to poke fun at the fact that instead of bottomless mimisosas at brunch, I drink bottomless iced teas.

Every week, my inbox is full of invitations for brunch or dinner, and 19 out of 20 of those include the words “seasonal cocktails” “wine pairings” “boozy” and “craft beer.” I usually respond, as cheerfully as one can via email, that I have five years sober and am a food-focused gal. I love this beat that I write on, and I honestly don't ever see myself giving it up. It's too delicious—but to be sure, you have to be prepared to go in ready to stand by your choices, since temptation is technically just a couple of words away (and it's usually free).

When I got sober, I began leaving charity galas and fundraisers early while others worked on their fourth or fifth glass of wine, which seemed to magically appear. I've struggled more to get a soda or a seltzer in some situations than I did to get my hands on a bottle of alcohol at 16, and I've watched waiters who have heard me specify that I can't have any alcohol at all drench a perfectly good Baked Alaska in rum and set it aflame. Dude, just because you blow-torched the damn thing for five seconds doesn’t mean you've cooked the alcohol out, or that I want my dessert to taste like a make-out session with a drunken investment banker. Earlier this year, on a special foodie "tasting sail" around the New York harbor with a celebrity guest chef, I had to wait 10 minutes while the bartender handed out the 100 free pre-prepared cocktails to everyone else on board before he'd soda-gun me a Sprite. He tried to charge me for it.

You don't realize how much people are pushing the alcohol until you're observing the pushers without buying what they're "selling." It makes sense, in a way: alcohol loosens people up, which is why stand up comedians often tell you to drink until they're funny. Drinking also loosens up a person's grip on their wallet, and most restaurants, hospitality venues, and caterers make the majority of their money this way. It's also just an undeniably huge part of our social culture. To date, I have met one other sober food writer, and I'm sure there are a handful more out there I have yet to meet.

You may be wondering if it’s annoying, or even upsetting, to have to keep turning down free alcohol that's all but poured on my head like a World Series champion several times a week.

The answer is not really, actually, but that's because I've come a long way. I don’t need booze to enjoy myself, or to be myself and have fun. I don’t feel like I'm "missing out" on that aspect of the experience, no matter how many months that whiskey spent in an oak barrel, or how many years the sommelier spent in Tuscany, or who that mixologist used to personally make cocktails for in Hollywood.

Not drinking allows me to focus on the food—a lot of food, which is a lot of fun. So I go in armed and confident because I know that something like this is always, potentially, waiting in the wings. I knew to ask whether that “milkshake shot” served to me at a club-restaurant hybrid on the Lower East Side was actually a shot (it was) and also learned that the rest of the desserts were all made with alcohol, too. The end of that interaction went like this:

“Remember when I said I can’t have alcohol?” I smiled as I started helping the waiter load it all back up onto his tray.

“Oh, you meant no alcohol at all?” he asked.

"None at all," I said. "But you should feel free to enjoy these, don't waste them!"

He then leaned in and whispered, “Are you pregnant?”

We all have our hidden limitations, scars, things that make everyday life a different experience for us. Mine happens to be that I can't drink normally, so I don't drink at all. But just like any other positive choice we make, and any other challenge we have to live with, we find healthy tools to get us through it.

I still visit up to five restaurants a week, and for the most part, the staff totally gets it when I hand them back the cocktail menu with a smile and a “no thank you” or turn my wine glass over, and that's the end of that. Humor and honesty have gotten me far, and also keeps FOMO far away.

When you feel content and confident about your decisions, you’re not really as concerned that everyone else is doing something you can’t. What I can do is be grateful for these experiences that many other people don't get to have. So really, it could be argued that they’re the ones missing out—they just don’t know it.