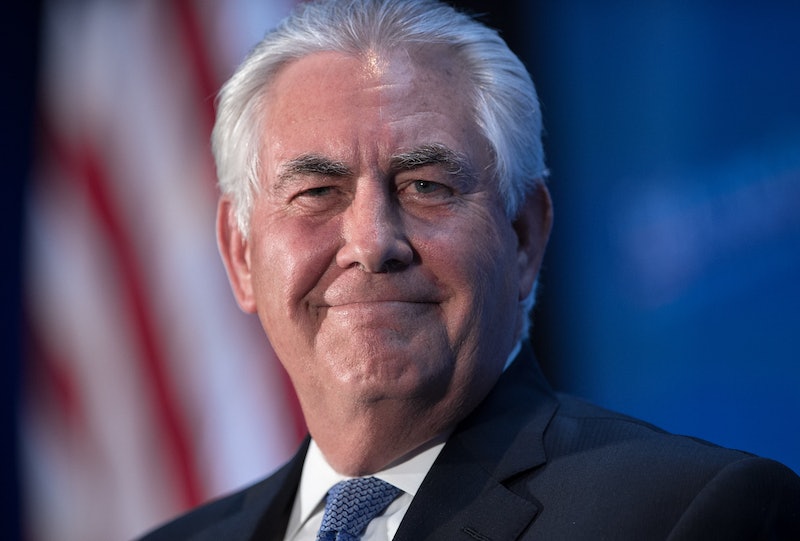 Unless something changes between now and the official announcement, it sounds like the Trump transition may have settled on its choice for Secretary of State ― according to a report from NBC News, it'll be Exxon-Mobil CEO Rex Tillerson. The 64-year-old Tillerson is the head of the multinational oil company, one of the world's most profitable and dominant forces in fuels, and he's also noteworthy for having zero experience working in government. So, with that in mind, what is Rex Tillerson's stance on Russia?

Make no mistake, Tillerson ― assuming he's indeed officially announced as Trump's pick, and is confirmed by the Senate, both of which can't be 100 percent assured just yet ― would be entering the Secretary of State job as far more of a blank slate, in simple policy terms, than is normal. The top job at the State Department is typically one that goes to career diplomats, or politicians with demonstrated experience and savvy in international affairs. Tillerson is neither of those, and the only experience he has that could even be argued as relevant comes from his international business dealings.

Luckily however, for anyone curious what his views or attitudes toward Russia might be, one of the biggest deals of his Exxon-Mobil career was struck in Russia, and it won him a top honor from Vladimir Putin ― the Order of Friendship, which he received in 2013.

Tiller was awarded the distinction after engineering a deal with the Russian government for Exxon to gain access to drilling in the Arctic, in exchange for enabling Russia to join in on Exxon investments around the globe. As USA Today reports, the deal ultimately fell through due to U.S.-imposed sanctions, but that doesn't subtract from the proximity Tillerson has displayed to the Russian state.

In fact, in an interview with Fox News' Chris Wallace that's scheduled to air on Sunday, Dec. 11th, Trump himself praised Tillerson's qualifications as a "world-class player," and specifically cited his past deal-making with Russia. It's a somewhat surprising thing to trumpet, given the recent maelstrom of controversy over anonymous CIA allegations of Russian interference on Trump's behalf during the 2016 election.

In his case, he's much more than a business executive. I mean, he's a world-class player. He's in charge of I guess the largest company in the world. He's in charge of an oil company that's pretty much double the size of his next nearest competitor, it's been a company that's been unbelievably managed, and to me a great advantage is he knows many of the players, and he knows them well. He does massive deals in Russia, he does massive deals for the company, not for himself, for the company.

It's also worth noting that Tillerson's previous work in Russia is nothing he's shy about, at least not back before he became a rumored pick for Secretary of State ― the Order of Friendship is openly touted on Tillerson's biography page on Exxon-Mobil's official website.