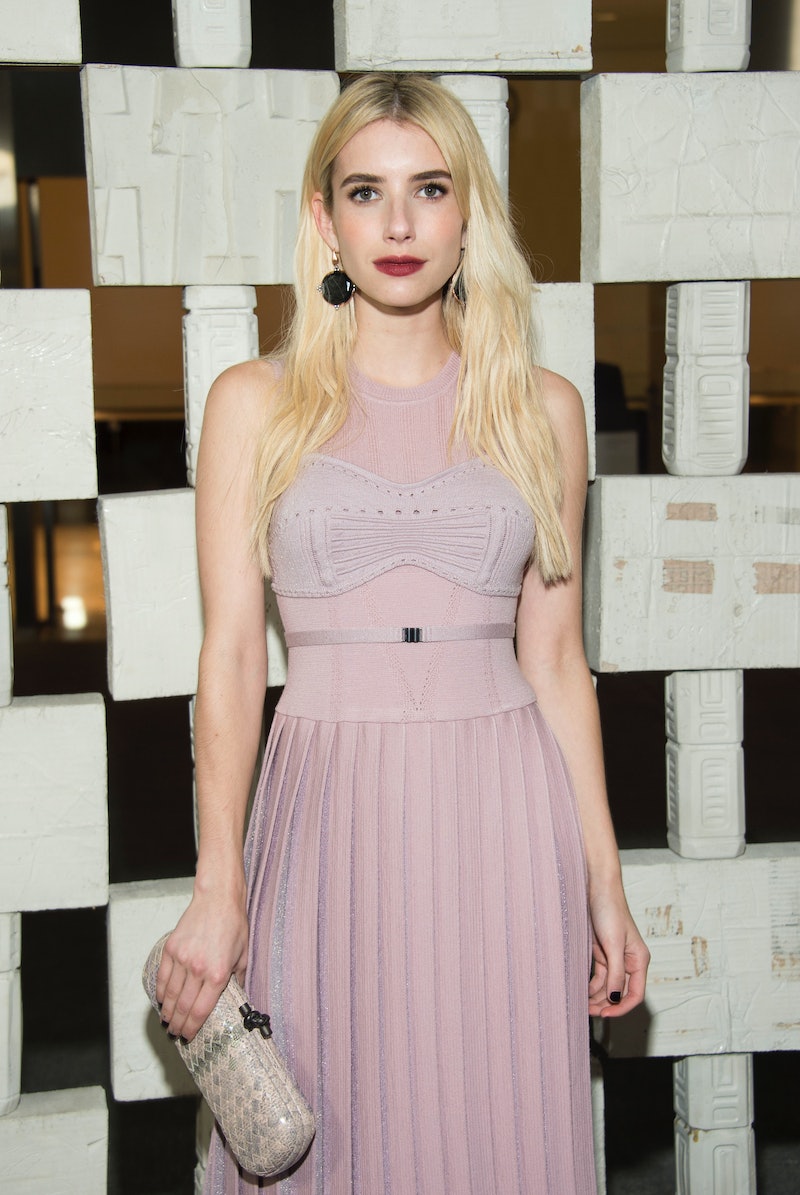 Now that filming for season two of Scream Queens is over, Emma Roberts said goodbye to her character, Chanel, by changing up her 'do. That’s right, Emma Roberts’ hair no longer looks like her character’s — but that doesn’t mean that Chanel wouldn’t approve.

On Dec. 9th, Roberts took over the Vogue Snapchat for the day. The 25-year-old actress posted everything from car rides with her sister, Grace Nickels, to a facial treatment performed by Joanna Vargas, to her glam routine before Coach's 75th Anniversary Runway Show.

While getting ready for the show, Roberts surprised Vogue's Snapchat followers with a hair cut, courtesy of Ryan Trygstad, who cut Roberts' tresses live on Snapchat. Roberts later revealed the final look on Instagram: A slightly shorter and more sophisticated blonde 'do.

While Roberts may be known for her iconic role as Chanel on Scream Queens, she is a style star in her own right. She further proved her insanely fashionable sense of style when she publicly debuted her new look at Coach's 75th Anniversary Runway Show.

Roberts rocked her nearly shoulder length blonde locks with a black button-up cardigan, sheer midi skirt, and pointed toe heels for a look that was both elegant and edgy, a look that read much more Roberts than Chanel.

Before chopping off her locks, Trygstad asked Roberts' fans what they thought of the idea.

It seems as though Vogue's Snapchat followers agreed with the stylist, as Trygstad cut Roberts' hair live on Snapchat shortly thereafter.

Trygstad revealed Roberts' latest look. He captioned the photo, "Getting rid of #chanel #screamqueens time for a little trim to bring @emmaroberts for her character Chanel back to Emma😍"

Before debuting her look at the event, Roberts showed off her new 'do via Instagram.

Here, Roberts poses with Drew Barrymore in a full Coach look — but her brand new hairstyle is the star of the show.

While Roberts latest hair style no longer looks like Chanel's, it is highly likely that Chanel would approve of Roberts' polished blonde 'do. After all, it's fit for a queen.

More like this
How To Master Baby Braids, According To TikTok
By Tomi Otekunrin
The Sliced Bob Is Summer's Hottest Haircut
By Danielle Sinay
10 Swoon-Worthy Beauty Looks From The 2022 Cannes Red Carpet
By Olivia Rose Ferreiro
Millie Bobby Brown's Blonde Hair Is Very Britney Spears Circa 2002
By Paris Giles
Get Even More From Bustle — Sign Up For The Newsletter