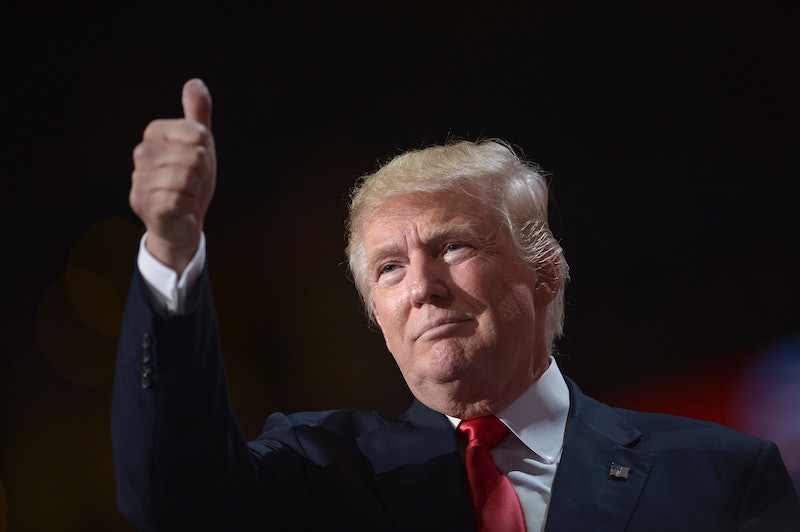 In yet another sign his presidency will likely be an unorthodox one, President-elect Donald Trump confirmed reports he was skipping the majority of his daily presidential intelligence briefings, but suggested they were unnecessary because he's "a smart person." In an interview with Fox News Sunday, Trump said he did not feel he would need to receive daily intelligence briefs after he became president, implying they were repetitive and he was comfortable relying on his generals and vice president to take the briefings for him. Yet, I have to wonder, is Trump's rejection of daily intelligence briefings a sign he wants to be president in name only?

Trump pushed back on criticisms he was not receiving presidential intelligence briefings often enough in an interview that aired Sunday, telling Fox News Sunday host Chris Wallace, "I get it when I need it." Trump also indicated he would continue to receive a reduced number of daily intelligence briefings when he takes office in January, implying they were repetitive and a waste of his time.

"You know, I'm, like, a smart person," Trump said. "I don't have to be told the same thing in the same words every single day for the next eight years. Could be eight years — but eight years. I don't need that. But I do say, 'if something should change, let us know.'"

Although the president-elect is entitled to the same daily intelligence briefings given to the president, Trump reportedly receives, on average, only one briefing a week, according to Reuters. His decision to skip a number of the briefings offered to him stands in stark contrast to comments he made in 2012 and 2014 when he criticized President Barack Obama for allegedly missing "58 percent of his intelligence briefings." Reports alleging Obama was not receiving the majority of his daily briefings were later proven false.

Trump indicated his generals and Vice President-elect Mike Pence would receive the daily intelligence briefings instead. "Now, in the meantime, my generals are great, are being briefed," Trump said. "Mike Pence is being briefed, who is, by the way, one of my very good decisions. He’s terrific. And they’re being briefed."

While Trump's decision to cap his daily intelligence briefings to roughly one a week is certainly unprecedented when compared to past presidents in recent history, it has also left some former defense officials concerned. In a Dec. 4 interview with Face the Nation, former Defense Secretary and CIA Director Leon Panetta said daily intelligence briefings play an important role in helping presidents understand the many complex issues facing the United States.

"If you're president of the United States, you better be in touch on a daily basis with your intelligence briefers," Panetta said, "so that you have an understanding as to what's happening in the world, what are the crises you have to pay attention to, and what steps do you have to take in order to deal with those crises? Every president I know – and I worked under nine presidents – every one has taken their intelligence daily brief because that sets the agenda for what you have to focus on as president of the United States."

Trump's unwillingness to receive daily intelligence briefings might seem less like an attempt to shrug off the more banal responsibilities of the presidency if he wasn't hosting flashy victory rallies and seeming to live tweet his Cabinet appointments. While the title of president comes with plenty of time in the spotlight, it also requires a willingness to tackle the mountain of monotonous work that doesn't come with thunderous applause or photo opportunities.