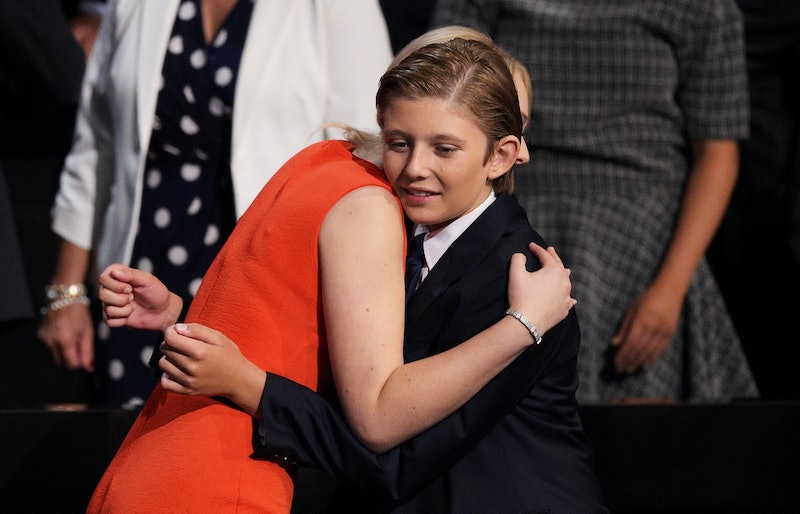 As Donald Trump prepares to take the Oval Office, curiosity in the incoming First Family has already begun to stir. While the senior Trump makes headlines with his bizarre cabinet picks and always-itchy Twitter finger, interest in Barron, Trump's 10-year-old youngest son, is on the rise. While some aspects of the youngest Trump, like his proclivity for computers, are well-known, others interested in his non-American background might wonder if Barron Trump speaks Slovenian. As it turns out, the littlest Trump is bilingual.

It's fairly well-known that Barron does in fact speak Slovenian, his mother's first language, and is fluent in the Eastern European language alongside his native English. He apparently learned the language young — in a 2009 interview with PEOPLE, Melania Trump bragged that Barron, who was three at the time, was already speaking Slovenian, and that the toddler also spoke French and English.

There's little surprise that Barron would speak multiple languages: his mother is a Slovenian immigrant and many immigrant parents (mine included) teach their children their native tongues. He's also currently being educated at an incredibly expensive prep school in Manhattan, and language skills are often critical in that type of education. In fact, Barron and Melania reportedly intend to stay in Trump Tower until at least the end of Barron's school year so he can remain at his Upper West Side prep school and keep disruption of his life to a minimum.

Interest in Barron stirred not once, but twice in recent weeks — first, when Rosie O'Donnell callously suggested that Barron might be autistic, and again when a reportedly questionable photo of Barron and Melania surfaced on Twitter. The initial stories were fairly innocent, but the way people dog-piled onto the stories on social media made them fairly abusive to Barron and his mother. Both instances were, of course, through no fault of Barron himself or even the Trump family, but rather the way people treat those who are thrust into the limelight. With the Trump name on the tip of the world's tongue, the unfortunate reality is that people can and will discuss them in less-than-savory ways, but to do so about a 10-year-old child who did not ask for his spotlight is a particular breed of disgusting.

Barron, who will be the first boy child in the White House since JFK, Jr., is already the subject of the kind of endless speculation we afford to the rich and famous. Hopefully his next four years, which will already be difficult as he enters adolescence, are as smooth as they can be and that any threats to that peace are swiftly taken down.