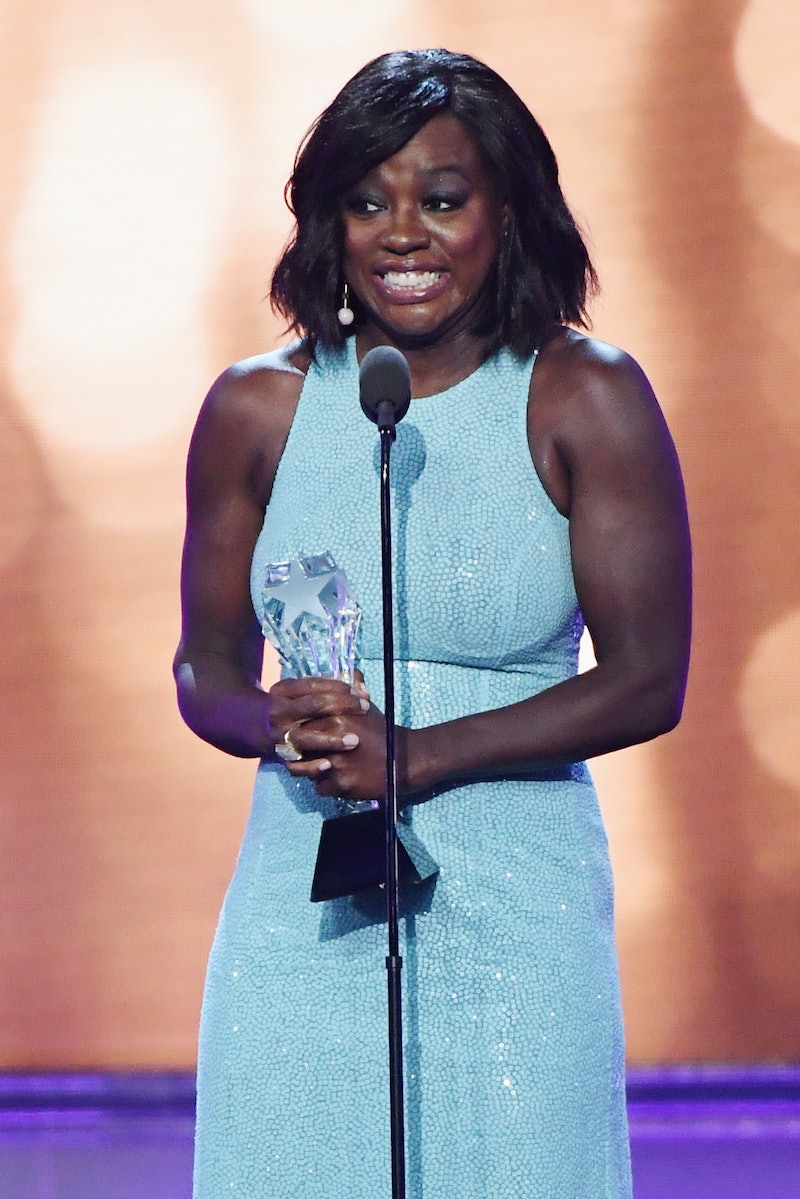 Much has been said about the representation of women in media — from #AskHerMore to watching a woman run for President of the United States, women in entertainment and media are fighting for real representations of themselves to appear on stage, film, and screen. In honor of that, Viola Davis was given the #SeeHer Award at the 2017 Critics’ Choice Awards. Though Davis’ work speaks for itself, she used her time on stage at the awards show to say that she’s not only a role model for young women everywhere, but she also is still figuring it all out herself.

I knew that once Davis took the stage to accept this honorary award (she also won for Best Supporting Actress in a Feature Film for Fences) that her speech would be great. I love listening to Davis speak, as she always has something intelligent to say. At 51, Davis has come into her own and become a star, which is not something you see often in age-obsessed Hollywood. Amy Adams, who presented Davis with the award, talked about how Davis is a force, and in her speech, Davis showed just why. She started things off perfectly calling out how she is getting an award for being a role model in Hollywood but is doing something that is vehemently against what this award is supposed to represent — inclusivity. Davis said:

“It’s hard to accept being a role model for women when you’re trying to lose weight. But, it’s true.”

I love that Davis called out Hollywood like this, because actresses are asked to lose weight far too. She didn’t name a specific role or anything like that, and one thing I’ve heard female celebrities say over and over again is that they’re just constantly watching their weight. This feeds into Hollywood’s obsession with being thin, which is not representative of all women and can send a bad message to those who don't subscribe to these idealized standards. Davis continued to take no prisoners in her speech:

“I’ve always discovered the heart of my characters by asking, ‘Why?’ When I was handed Annalise Keating, I said, ‘She’s sexy, she’s mysterious, you know?’ I’m used to playing women who gotta gain 40 pounds and have to wear an apron. So I said, “My God, I have to lose weight, I gotta learn how to walk like Kerry Washington in heels, I gotta lose my belly…” And then I asked myself, ‘Well, why do I have to do all that?’ I truly believe that the privilege of a lifetime is being who you are, and I just recently embraced that at 51.”

First of all, hear, hear. Davis helms one of the biggest shows on television, so her talent and accomplishments should be more than enough to earn her additional roles. And if more women like Davis assert that they will not change themselves to fit in a mold, it will make it easier for other women down the line. Davis recognizes her power, too.

“I think my strongest power is that at 10 o’clock every Thursday night, I want you to come into my world. I am not going to come into yours. You come into my world and you sit with me, my size, my hue, my age, and you… you sit. And you experience. And I think that’s the only power I have as an artist, so I thank you for this award. And I do see her, just as I see me.”

Davis shows that once a person embraces his or her inner self, he or she really understands their own power. In this case, she has the power to make people sit down and watch How To Get Away With Murder, and that’s something. She can also make people stop and take note, and that’s why she’s a role model. Davis is who she is, she does not apologize for it, and she never should.