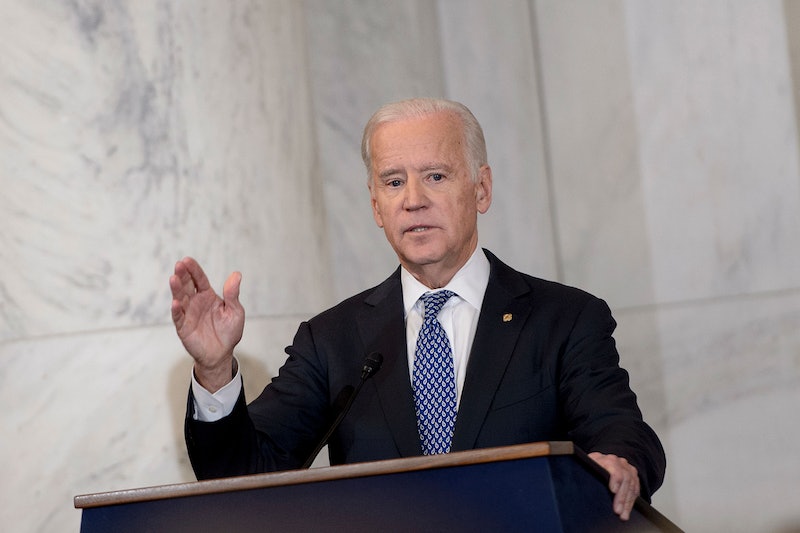 President-elect Donald Trump's Cabinet continues to take shape, and the most recent hints are that he will choose Exxon CEO Rex Tillerson to be Secretary of State. Trump called him a "world class player and dealmaker" on Twitter Saturday. If picked, he would join a legion of business executives, generals, elected officials, and rich people that Trump has tasked with leading the nation — some of whom are more than a little controversial. Therefore, Vice President Joe Biden's opinion on Trump's cabinet could be useful as he lays out potential criteria for who the Senate should confirm.

Biden took on a number of topics while speaking with Jake Tapper in an interview for CNN's State of the Union that aired Sunday — but the most interesting may be what he said about Trump's Cabinet. Tapper brought up the topic by speaking about Trump's nomination of Sen. Jeff Sessions as Attorney General (a move that has angered many, including Sen. Elizabeth Warren, who has promised a fight on the nomination). He pointed out that Biden led the fight against Sessions' appointment to a federal judgeship in the 1980s due to accusations of racism.

Thus Tapper asked, "Are you comfortable with the idea of an Attorney General Jeff Sessions?"

Biden's response may prove a roadmap for the Senate when it is considering not just Sessions' nomination but all of Trump's Cabinet picks. Here's what Biden told Tapper:

You know, I wouldn't have appointed Jeff, but, you know, people learn. People change. And my general rule is the president gets to choose who he wants or she wants for their Cabinet members, unless ... they're taking over the job with the express purpose of not enforcing the law in that area.

In other words, if Sessions is going to fulfill his job by enforcing the law of the land as the attorney general should, there's no problem. But Biden pointed out that might not be the case for all of Trump's appointments, particularly his choice to head the Environmental Protection Agency, Oklahoma Attorney General Scott Pruitt. "If he's going not to enforce Clean Air and Clean Water acts in the name of jobs, then that's not a guy you vote for," Biden explained. He said in the past that's why he has voted against nominees:

Within bounds, the president should get the person they want for that job as long as they commit under oath that they're going to uphold the law.

Biden went on to say that he hopes Sessions would meet that criteria — but that we'll need to see what he says in the confirmation hearing.

Using this rule could be a great way to consider during the confirmations in the Senate. There's no way the Democrats can hold the line against every nominee — they will need at least two Republicans to join in too. So this could be the way to hone in on the truly offensive nominees and make sure that they are not confirmed.

Biden may be one of the key sources of wisdom in taking on Trump's GOP these next four years, so make sure to listen.