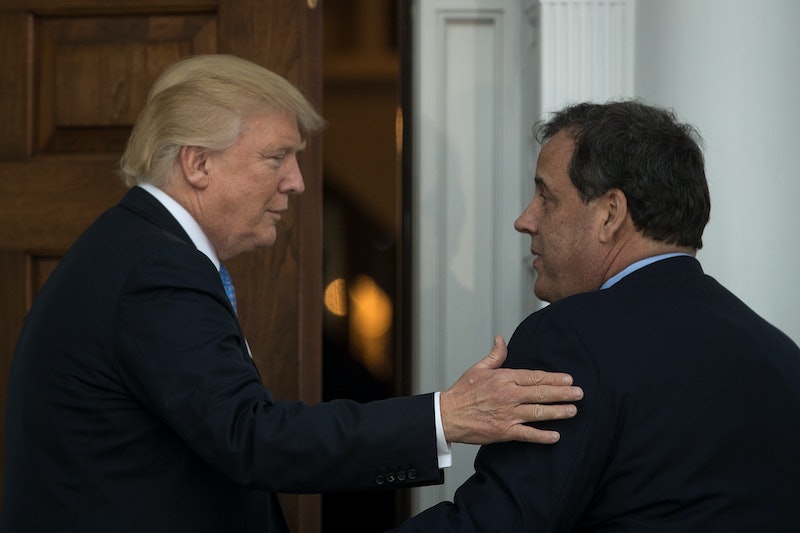 Back in November, New Jersey Gov. Chris Christie attracted lots of speculation when he met with President-elect Donald Trump at Trump International Golf Club in Bedminster Township, New Jersey (where else?). The two were assumed to be discussing Trump's transition, which Christie had been chairing until shortly after Trump won the election. Most important to Christie, it now appears, was the attorney general position, but thus far, Christie notably has not been named to the incoming Cabinet. Instead, he looks set to finish the rest of his term as governor. So why won't Chris Christie be in Donald Trump's cabinet?

According to a report from NJ Advance Media, Christie wasn't interested in the positions he was offered. Two sources told the website that he was offered high-level positions like Homeland Security secretary, Veterans Affairs secretary, and advisor roles within the White House. The ambassadorship to Italy was also on the table, according to NJ Advance Media, but Christie reportedly declined them all. The reason could circle back to the position of attorney general — a position that Christie was never offered. Sen. Jeff Sessions was named by Trump, and will face Senate confirmation.

The New York Daily News noted how Christie's lack of Cabinet post is essentially a "stunning fall from grace for the governor," given his prominent roles in the campaign before being demoted from the transition chair. The paper made the popular case that his demotion had to do with Trump's son-in-law Jared Kushner, whose father was prosecuted by Christie for tax evasion and election fraud back in his days as a U.S. attorney. Kushner has adamantly denied this claim.

Just last week, there seemed to be a chance that Christie would at least be down in Washington the next four years. He put his name in the running for RNC chairman, now that Reince Priebus will be moving over to the White House as Trump's chief of staff. That didn't work out, either. NJ Advance Media reported that normally the post is full-time, and Christie was hoping to do it on the side while remaining governor. Supposedly, he and Trump mutually decided that wasn't the best plan.

Whatever the reason for his "fall from grace," Christie has ended up right back where he started in New Jersey. The voters there are extremely unhappy with his performance — his approval ratings are consistently below 20 percent. Given that he was once ridiculed for his early endorsement of Trump, that has to sting even more. Trump had said that loyalty mattered most, but that didn't win Christie the role of attorney general, or, it seems, former New York Mayor Rudi Giuliani the role of secretary of state (reports point to Exxon's CEO being Trump's favorite).

In the NJ Advance Media piece, the outlet quoted sources who said Christie was really at peace with the decision and his position as governor (which ends in January 2018). But he added at a November press conference that he would stay as governor unless "something extraordinary happens in the world where my service is needed."

So stay tuned; he may still have hopes for a side gig these next years.