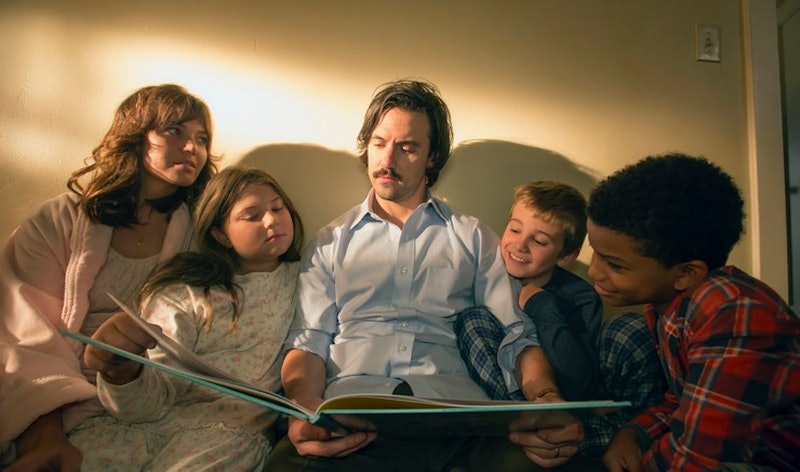 Though This Is Us has been touted as a Parenthood replacement, the show has already proved it has its own legs to stand on. The NBC breakout drew major views before it even premiered: its trailer alone earned millions of plays on YouTube in only a handful of days. Its first season run has followed suit with standout ratings and rampant online buzz, so all eyes have been on the show now that awards season is underway. Following the announcements on Monday morning, you may be wondering how many 2017 Golden Globe nominations This Is Us got.

Well, it came in with a solid three nods. Both Mandy Moore and Chrissy Metz are up for Best Performance by an Actress in a Limited Series or Motion Picture Made for Television. Moore plays Rebecca, a tenacious mother of three, and Metz portrays her daughter Kate, who’s struggling with her self-esteem. The family-centric series also placed in the coveted Best Television Series for Drama against equally esteemed competitors Westworld, Game of Thrones, Stranger Things, and The Crown.

While Moore and Metz’s shoutouts were certainly deserved, it’s surprising that their male counterparts didn’t also notch some credit. Sterling K. Brown is fresh off of his first Emmy win for his role in American Crime Story: The People v. OJ Simpson, and his turn in This Is Us as the Pearson’s adopted son, Randall, has been equally applauded. Justin Hartley, too, has raked in praise for his part as macho actor Kevin. Most surprising, however, is that Milo Ventimiglia didn’t make the cut. His heart-tugging performance as the Pearson’s doting father has been critical to the show’s success, and Twitter isn’t too happy about his snub.

Still, three nominations is perfectly commendable, and every cast member helped land This Is Us in the Best Television Series category. Whether or not it will win remains to be seen, but the series has already roared into awards season with solid footing, and that’s worth celebrating.