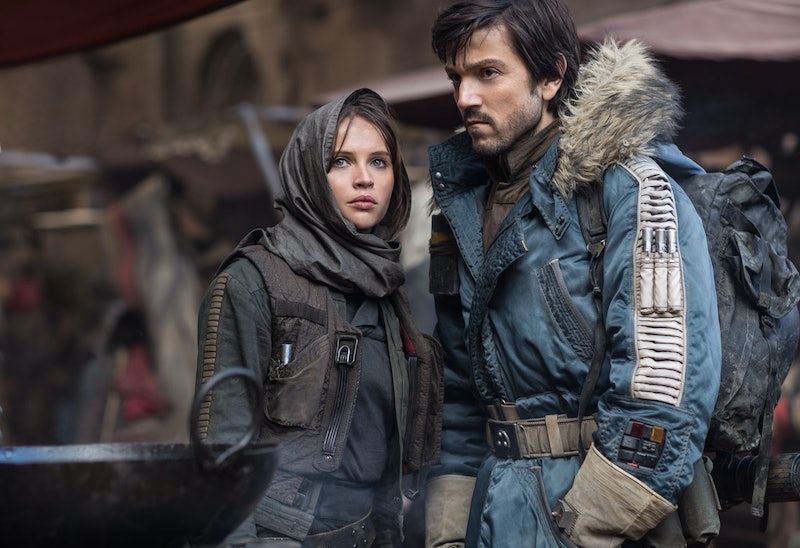 Never seen a Star Wars movie in your life? I bet you can still recognize "The Imperial March" and the "Main Theme" when you hear them. And that's because the Star Wars scores written by composer John Williams have a life beyond those films and are firmly embedded in popular culture. Williams composed the music that contributes to the emotional urgency and grandeur of all three of the original Star Wars movies; all of the prequels, and last year's The Force Awakens. But don't expect to hear much of his work when the newest Star Wars installment hits theaters on Dec. 16. John Williams did not score Rogue One: A Star Wars Story , but he'll be back for Episode VIII.

Rogue One is not the first Star Wars film Williams has sat out, but it is the first live action Star Wars film he hasn't composed for. The music for the 2008 animated adventure Star Wars: The Clone Wars was composed by Kevin Kliner, who also writes for the Star Wars: Rebels animated series. The Rogue One job was originally meant to fall to Alexandre Desplat, best known for both parts of Harry Potter & The Deathly Hallows, as well as his collaborations with Wes Anderson. But The Hollywood Reporter reported in September that Desplat gave up the gig because of scheduling issues, and because of that timing issue, Star Trek, Doctor Strange, and frequent Pixar composer Michael Giacchino was brought in to score Rogue One.

But why did Williams step aside in the first place? According to an interview with Variety that ran this summer, the issue seems to have been workload. The composer is 84 years old and still working consistently. "I could use a little break," Williams said, though he clarified that he is by no means retiring. And putting Rogue One into the hands of another composer ensures that Williams has the bandwidth to keep on writing for his favorite Star Wars character. "If I can do it, I certainly will," he said about Episode VIII before his participation was officially confirmed. "I told [Lucasfilm President] Kathy Kennedy I’m happy to do it, but the real reason is, I didn’t want anybody else writing music for Daisy Ridley." Yes, Williams loves Rey as much as you do.

So Williams will be back in the Star Wars fold for sure. But now it's time to be amazed by his successor, who only had a month to write the score for this new epic. Giacchino talked to Entertainment Weekly about being called in to essentially save the day. (How very Star Wars.) "At the time, it left me with literally four and a half weeks to write," he said. "So it was one of those decisions where you’re like, 'OK, well…' And I was talking to my brother about it. He goes, 'Oh, come on. You’ve been writing this score since you were 10. You can do this.'"

In the same Entertainment Weekly interview, Giacchino said that the influence of Williams will definitely be heard in Rogue One and in some cases, interpretations of his specific themes. "As a kid who grew up with John’s music and who was catapulted in this direction because of what he did, I had a very specific idea of what I wanted to use and how I wanted to use it," the composer explained. "That being said, I’d say the score is 95 percent original but with little moments [of Williams’ classic score] here or there to accent."

Williams is a giant in his field. But Rogue One is a new kind of Star Wars movie and a great opportunity for a new composer to get their hands on that incredible world.

More like this
The Meaning Behind Beyoncé’s Song "SUMMER RENAISSANCE" Includes A Special Tribute To Jay-Z
By Alyssa Lapid
The Controversy Around Beyoncé's “ENERGY”, Explained
By Frances Stewart
Everything To Know About The Musical 'Joker' Sequel – & Lady Gaga’s Role
By El Hunt and Sam Ramsden
Stephen Graham’s Wife Plays A Vital Role In His Career
By Emma Madden and Sophie McEvoy
Get Even More From Bustle — Sign Up For The Newsletter