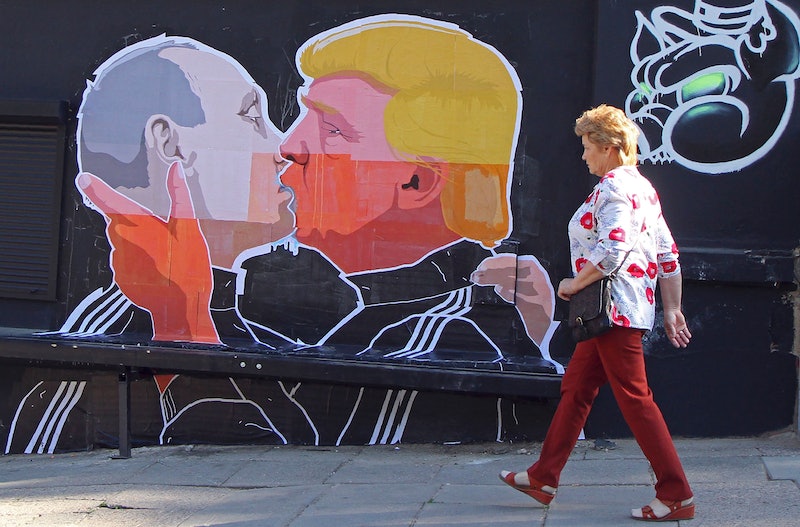 On Friday, The Washington Post reported that a "secret CIA assessment" determined that Russia attempted to help Donald Trump win the election. Trump, perhaps unsurprisingly, simply declared that he did not believe the report, but for once, the Republican rank-and-file do not appear to be on his side. Calls for an additional investigation into the alleged Russian interference were joined by formidable Republicans like Senate Majority Leader Mitch McConnell and former presidential candidate Sen. John McCain. The Los Angeles Times called it the "first significant postelection pushback" that Trump has received from a party that was slow to embrace him but ultimately turned out at the polls. And why wouldn't patriotic Republicans be concerned? Former acting CIA director Michael Morell called the allegations in the CIA report "the political equivalent of 9/11."

If only we knew about this before the election, right?

Except, of course, we've known about allegations of Russian interference for months. The Obama administration accused Russia of interference in early October, and it was widely reported at the time. We knew before the election, just as we know now.

Trump doesn't seem to remember that the Obama administration made its Russian hacking allegations public months ago, if his Monday morning tweets are any indication. What's possibly even more concerning, though, is that the American voting public already had this information before they went to the polls, and they voted to elect Trump, anyway.

Although Trump lost the popular vote (by nearly 3 million, according to the latest from the Cook Political Report), nearly 63 million Americans supported him. In retrospect, concerns about Russia being in the tank for Trump is just one of a litany of things that Trump voters were willing to overlook. For me, it sadly begs the question: why don't American voters care?

They overlooked the horrifying things he has said about women and allegations that he puts those words into practice (which he adamantly and consistently denied). They overlooked (or did they?) his desire to build a wall and ban Muslims from entering the country. They voted for him despite the fact that he insulted a Gold Star family and a war hero from his own party.

Voters elected Trump despite his astonishing, historic lack of experience, which has already caused problems with U.S.-China relations (yes, even before he has been sworn into office). Throughout his presidential campaign, his policies were jarringly light on specifics.

Perhaps, then, it isn't surprising that Trump's voters supported him even when it was reported that U.S. intelligence officials believed Russia has interfered with the election — and as Trump appeared to have increasingly cozy relations with Putin and co., consistently finding ways to defend Russia against hacking allegations before Election Day. But just because it doesn't surprise me doesn't mean it doesn't disappoint me.

More like this
The 5 Best Anti-Chafing Sticks
By Lauren Moison
Which Cast Member of 'Westworld' Season 4 Has the Highest Net Worth?
By Meg Walters
These Hidden Gems On Amazon Can Make Your Home Look 10x Better For Less Than $35
By Maria Sabella
The 8 Best Bras For Lift & Side Support
By Jen Fiegel
Get Even More From Bustle — Sign Up For The Newsletter